I met a lot of great people during the course of those few days.

But there was one that stood out.

He's an individual that represents everything that I stand for when I think of great media colleagues.

He was an original sports anchor in 1979 at ESPN when the network was a pioneer in becoming a specialized programming entity.

His name is Bob Ley.

Our paths crossed when Ley was inducted into the NSMA Hall of Fame Monday, June 24th.

I met Ley the night before in the banquet hall of BB&T Field, the home of Wake Forest University Football.

Bob and I spoke for 15 minutes before dinner.

I told him how much I respected his professionalism on the air.

He's an old school person that never sensationalized and believed in getting the facts right.

He's a person of high integrity that was great with every assignment he had.

Whether it was Sports Center, Outside The Lines, E-60, etc..., he delivered with professional poise.

We talked about the changes in this industry compared to when we began many years ago. 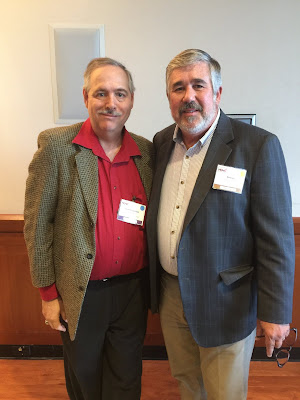 Bob has adapted to the changes as his network has grown from being a small one to the mega empire it's become.

Back in 1979, podcasts and digital technology wasn't imaginable.

I told Bob that I only watch a few shows at ESPN and that I get turned off by the loud debate shows, and I repeat loud ones, that some of their on-air talent demonstrates.

I mentioned to him that you don't have to mention any of the names that I'm talking about. I'll do it for you.

I told him the only shows I watch are those that I can learn from to not only make myself better, but to enhance the projects I'm working on.

We saw eye to eye on many things but I told him "that the day I stop learning will be the day I stop breathing." He definitely agreed with me and felt the same way.

I told him that he should enjoy the ride at ESPN for however long it may be, just like I'm doing.

We never know when it will end.

We'll collect the stories and memories to relate to others.

On this night, the 64-year old Ley and the 56-year old Morganroth would shake hands, exchange hugs and take a memorable photo.

The following night, I congratulated him again and he thanked me. I told him, "thank-you for making me a better professional."

He decided that his NSMA Hall Of Fame Honor was his way of going out on top.

We happened to be at DeMara's Pizza Restaurant near Georgetown, SC.

Candy and I actually watched a special edition of Outside The Lines with Ley and Jeremy Schaap in the restuarant.

For some reason, I wasn't surprised by this announcement because of our time together.

Although Ley's iconic career at ESPN is over, I see him spending more time with his family and eventually moving into a professor's role to mentor the next generation.

It wouldn't surprise me to see him get a call from another major network.

In my mind, his timing was perfect.

On that Monday Night, he had three ESPN colleagues to see his incredible honor.

His induction speech was excellent and emotional.

Who knows if our paths will ever cross again.

But the memories with Ley this weekend were Pure Ley The Best!

BY SCOTT MORGANROTH This is the time of the year in sports where we begin to hit that slower period where the NBA Finals are complete, the N...