JACKSONVILLE, FL-----The Detroit Lions did more than improve to 4-4 with their 31-14 win over the Jaguars at EverBankField. 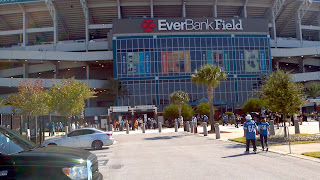 Detroit has a four-game winning streak in the State of Florida.

A week later, the Lions faced the Miami Dolphins and won for the first time ever in South Florida.

Detroit returned to Tampa and defeated the Bucs 27-20 to begin their 10-6 playoff run.

In these four wins, the Lions won with three different quarterbacks.

Going into this game, Stafford needed 52-yards to reach the 10,000 yard passing total. He added 285 and is at 10,233. He accomplished this in his 37th career game and reached this goal in the second fewest games.

The fastest was Kurt Warner, who did it in 36.

Here is some more history.

The last time the Detroit Lions defeated Jacksonville was at home crushing the Jaguars 44-0 at the Pontiac Silverdome in 1995. This was the largest margin of victory in Lions history. I can just imagine the age of most of the players on this roster.

The only thing this game showed me was why the Lions are 4-4 and the Jaguars are 1-7.

The Lions cruised from start to finish. Detroit took a 21-0 lead at halftime and used a balance offensive attack to close out an opponent that played without it's best running back. Jacksonville could have used Maurice Jones-Drew.

To see Stafford rise up the Lions quarterback passing totals means only two things. The kid has uncapped potential or that position has been that bad.

To think that Bobby Layne has 15,710 yards is Number One is just amazing.

In the Lions next game on the road against the Minnesota Vikings, Stafford will pass Joey Harrington (10,242) to move to sixth on the all-time list.

We might as well finish the ladder as Greg Landry stands third with 12,451 and Scott Mitchell is second with 12,647. This distance between Mitchell and Stafford is 2,414 yards. Stafford could be second by the end of the season or by the first four games of 2013.

That's remarkable. This is just for passing yardage.

Against the Jaguars, Stafford didn't have to be the gunslinger. Running backs Mikel Leshoure and Joique Bell helped him. Bell had 13 carries for 73 yards and a touchdown while Leshoure had 16 carries for 70 yards and three touchdowns.

Calvin Johnson had his usual fine outing with seven receptions for 129 yards while rookie Ryan Broyles had six catches for 52 yards.

When the game was over, Stafford downplayed his milestone.

It's cool, but other than that, I don't really care," Stafford said. "The lucky thing for me is that I'm surrounded by a lot of great talent. That makes a quarterback in a lot of instances. It's fun to be able to play in this offense with these guys."

Lions Coach Jim Schwartz said the team came to Jacksonville for one reason, "The biggest thing we were able to accomplish was getting the win and certainly that's the only thing that we're concentrating on.

"So obviously, our future is bright with Matt Stafford. Whether it's a game like this where he's handing it off a lot, again he's got to go and play with a lead, or a game where he has to catch us up. He's able to do anything on the football field."

Kyle Vanden Bosch didn't know about the Lions four-game Florida winning streak until I told him. But he said the teams attitude has definitely changed when they board an airplane.

"This team when I got here had a lot of road problems historically," Vanden Bosch said. "It feels good, but it's not easy to win on the road in the NFL. It's a difficult thing to win on the road. We practice in 40 degree weather so to come down here in hot and humid weather and be able to execute and put a good game together was important. It's part of the process."

Now the Lions can take another stadium off the list that they've never won as they are 1-2 in Jacksonville and 2-3 overall in the all-time series. The Lions have now won in the Tampa Bay Area, North and South Florida.

It's too bad that they don't receive their paychecks in Florida because there is no state income tax.