When the Los Angeles Dodgers faced the New York Yankees at Yankee Stadium last week, there was a strange face in the visitors dugout.

His name was Don Mattingly and he manages the Dodgers. During his playing days, Mattingly only wore one uniform. From 1982-1995, his attire consisted of the Yankees pinstripes, then he was a coach from 2004-2007.

The 52-year-old native of Evansville, Indiana., had his No. 23 retired in 1997. Mattingly is honored at Monument Park at Yankee Stadium. 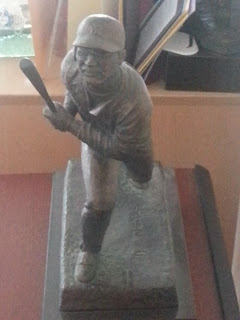 I have a hydro stone statue of Mattingly at home that I purchased when I visited the Baseball Hall Of Fame in Cooperstown, New York., several years ago.

Although Mattingly's numbers may never get him into Baseball's Hall Of Fame, it still seems weird watching him manage a team that once played in Brooklyn, New York. These two franchises have been involved in some Classic World Series Showdowns with their Subway Series and with the Dodgers in Southern California.

If it weren't for the vision of Commissioner Bud Selig to have inter-league play, we wouldn't see this series in the regular season.

For that matter, we wouldn't see rivalries like the New York Yankees VS NY Mets, Dodgers, and the San Francisco Giants, Chicago Cubs VS Chicago White Sox, Oakland A's VS SF Giants, Detroit Tigers VS St. Louis Cardinals, plus the Boston Red Sox VS Atlanta Braves to name a few.

The Dodgers and Yankees rivalry did bring out many great memories which were nice to see with Mattingly becoming the ironic story line.

I Need Stronger Glasses because I thought Mattingly was wearing the wrong uniform.