Back To The Past

The organization that runs the Edward Jones Dome said the facility will not get a public funded $700 million upgrade that the St. Louis Rams requested.

The decision allows the Rams to break their lease with the dome after the 2014 season, creating the possibility that they could leave St. Louis.

To me, there is one possible destination. 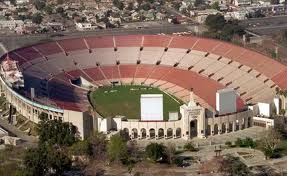 The Rams played in Southern California from 1946-1994 starting out with the LA Coliseum then moving to Anaheim.

Knox and Hall of Fame Coach Don Shula were former Lions assistants who went on to have stellar careers as head coaches with other teams. The Lions had another chance to land Knox later but decided to hire Monte Clark instead. Knox was a Lions assistant from 1967-72.

Should the Rams return home and create the scenario "Back To The Past," I have a strong feeling there will be very little objection from NFL Commissioner Roger Goodell.

To land the No.2 TV Market will be a no-brainer.

If St. Louis loses the Rams, which won Super Bowl XXXIV 23-16 on January 30, 2000 over the Tennessee Titans, then it would be the second NFL team that this Missouri city has lost when the Cardinals departed for Arizona in 1987. The Cardinals were in Missouri from 1960-1987.

One thing is certain, if St. Louis loses this franchise, the No. 21 TV Market won't get a third team.

I wouldn't rule out the possibility that the Rams could have company in LA if the San Diego Chargers lease doesn't get straightened out. San Diego's TV Market is 28th and the NFL could have a team in the AFC and NFC.

Diehard Chargers fans could take the trip up the freeway to see their team play in LA.

Should the Rams return to LA, they have unfinished business.

As I watch pre-season football, I wonder how much longer we'll be talking about the St. Louis Rams. Stay tuned. I have a feeling this story is far from over.

Man, I hope the Rams come back to LA! I lived in the Bay Area when they won that Super Bowl against the Titans, and now that I am in SoCal would really enjoy tailgating at Rams' games on Sunday, when they are home!