When I approached former Deerfield Beach Observer Editor Ric Green about the possibility of joining his staff in 2007, I couldn't have been happier that he created the FAU Football beat. 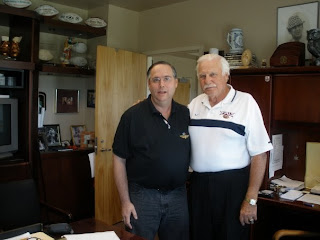 Being reunited with Howard Schnellenberger, the former Miami Hurricanes football coach who led UM to the National Championship in 1983; now watching him build this program from scratch was special.

While I enjoyed our time during the championship season, this was a different feeling.

Despite the early stages of back problems that led to surgery two years later, I enjoyed that first training camp and watching practices in the sweltering South Florida heat. Thanks to physical therapy, I held up fine that season.

It was neat when Public Relations Assistant Dawn Elston reunited me with Schnellenberger again after 25 years at the conclusion of that first practice.

Things worked out well that season and Green awarded me by allowing us to expand the coverage into all sports.

I also enjoyed the Christmas Party at the end of the year and the editorial staff did an outstanding editing job on the stories.

Green usually had me write as many as five stories a month, but a minimum of four. During the latter part of his tenure, due to declining advertising, it dropped to three. Green resigned from the Observer and became the CEO of the Pompano Beach Chamber of Commerce.

His successor David Volz did a good job continuing covering FAU Sports. Once Volz was removed as Editor, he was replaced by Diane Emeott-Korzen.

During the past couple years, it's no secret that advertising in print media has declined drastically. The Observer has been around for 50 years which is rare especially for a weekly publication. Many newspapers have gone out of business or have merged with their competitors.

Emeott-Korzen was limited financially as my contribution maxed out at two stories but the majority of the time was limited to one.

Gone are those full page previews with three stories and a couple photos that I took at training camp at the end of August.

On August 29, 2013, this years Observer Sports Section was limited to a few youth sports stories and the paper was 20 pages.

This will be a different football season for me. It will be my first without FAU Football as a writer for the Deerfield Beach Observer.

Due to their declining advertising and decision to cover their local teams, there was no reason to have a writer assigned to a major university in their backyard. It would be easier to publish press releases, use the FAU website or hire an intern and pay nothing, therefore eliminating concerns that payroll would be met on time.

When I began covering FAU, I had the following goals:

1. Stay on until Howard Schnellenberger retired.
2. Cover the first game at the New FAU Stadium.
3. Watch FAU compete in its first bowl game. I saw their first two and the Owls won the New Orleans and Motor City Bowls.
4. Seeing QB Rusty Smith become the first FAU player drafted by the Tennessee Titans.
5. Being at their last game in the Sun Belt Conference as they are now a member of Conference USA.
6. Former FAU running back Alfred Morris rushed for 1,613 yards in his rookie season of 2012 and was named Second-team All Pro.

Towards the end, FAU Football was limited to monthly updates.

Gone were the weekly conference calls as space size declined and I wasn't contacted anymore.

Those conference calls were great as Schnellenberger would open up to myself, Marcus Nelson, Ted Hutton and Tom Ryan about the good, bad and the ugly. We learned a lot about the team, and a lot about football.

When Carl Pelini took over as football coach, media access after Schnellenberger's departure was tremendously reduced.

While my tenure of covering FAU Sports is over with the Deerfield Beach Observer, This Website and the Detroit Sports Broadcasters Association (DSBA) will provide this upstart university with some National Exposure.

My projected FAU slate is 2-3 games and I'll be watching closely as to how well the university competes in their new conference.

I still look forward to working with Katrina McCormack and Justin Johnson.

Last year, I didn't see Hutton at Football games as he went to Nursing School. Ted saw the newspaper business declining as he left the South Florida Sun Sentinel to find a new career.

Ironically, Angelos landed a job at My alma-mater the University of South Florida. I have a feeling that our paths will cross again.

It was fun while it lasted and a new chapter begins.

Scott Morganroth can be reached at scottsports33@aol.com.
- September 04, 2013