This is the day that Muhammad Ali's Funeral took place as "The Greatest Of All Time" was laid to rest.

When I read on Facebook that My Childhood Idol Gordie Howe died at 9:35 AM, I couldn't believe what I was seeing. But when I heard it on Mike and Mike In The Morning at 9:52 AM that Howe passed away, then the news stung even more.

Mike and Mike rarely talk about Hockey, but ESPN 2's producers did a good job compiling as much information in a 90 second time frame. 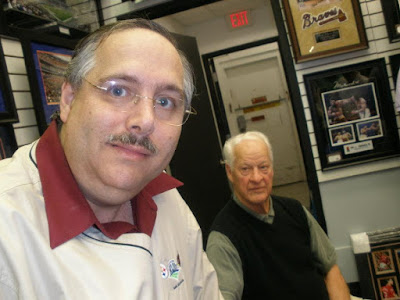 It's amazing that Ali and Howe, who are on My Mt. Rushmore of Idols would be memorialized on June 10, 2016.

During the past week, The Sports World has been hit by The Death Bug.

It would be easy to write this tribute with all of Howe's records, but there wouldn't be enough storage space or memory on the website.

Every Hockey Fan knows about The Gordie Howe Hat Trick consisting of a Goal, Assist and a Fight.

He won four Stanley Cups, six Hart Trophies, six Art Ross Trophies and was inducted into The Hockey Hall Of Fame in 1972. He also played in 23 All-Star Games.

Howe is the only player to have ever played Professional Hockey in six decades.

The statistics I've mentioned don't even include the time Mr. Hockey spent playing for the United States Hockey League's Omaha Knights, The World Hockey Association's (WHA's) Houston Aeros, and New England/Hartford Whalers, in addition to the Detroit Vipers of the International Hockey League, which played at The Palace of Auburn Hills. The Hartford Whalers played in the NHL.

According to Murray Howe, the only city that Mr. Hockey was ever booed in was Cleveland, Ohio when Gordie played in the WHA.

Howe is described as the No.1 All-Time player by legendary Red Wings Hall of Fame Coach Scotty Bowman.

Name me a North American athlete that will have a bridge in his honor connecting two countries, the United States and Canada.

A bridge over the Detroit River connecting Detroit to Windsor, Ontario., will be named "The Gordie Howe International Bridge" is set for completion in 2020. At least Mr. Hockey was alive to see this honor named after him.

Like Ali, there was no shortage of memories with Mr. Hockey.

I remember seeing him play at The Olympia Stadium as a child back in the late 1960's--1971. I would keep a small radio next to my bed in Southfield, MI., listening to play-by-play announcer Bruce Martyn describing every play, goal, hit and fight, etc... 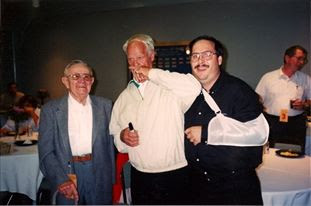 Howe made his rounds around the Metro-Detroit Sports Scene.

We took a picture at the Pontiac Silverdome in the dining area, My shoulder was in a sling due to a torn rotator cuff, but I enjoyed being "Elbowed" by Mr. Hockey as Lions legendary Announcer Bob Reynolds looked on.

On the ice, Howe's opponents took many of these elbows all over their body and head; and they must have hurt.

Ali was known for "Fists To The Jaw"  and Howe specialized in "Elbows." Howe always said that Hockey is a Mans Game.

My pictures with both of these icons are worth more than a 1000 words.

During my time as a resident of Metro-Detroit, I got to know Howe's publicity people. They were kind enough to send me two autographed photos of Howe which are in My Office in Deerfield Beach, FL. 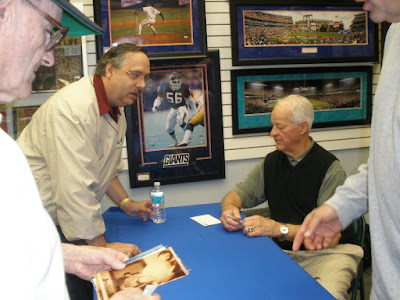 My path crossed again with Mr. Hockey in 2011 when we took a couple photos together. We talked about Hockey for a few minutes, and he remembered me writing mentions of him in Stories for The Detroit Monitor, then shook hands as he signed autographs for a Sports Memorabilia Store in Coral Springs, FL.

Gordie seemed like he was in decent health at the time.

Yet, as we get older, our bodies do break down, and Howe was diagnosed with dementia and suffered strokes.

Mrs. Hockey Colleen Howe passed away in 2009 at the age of 76 after a long battle with Pick's Disease.

Yet. Mr. Hockey had an Iron Ticker and despite these medical issues, he would continue to fight tougher than his rivals on the ice.

Howe had Stem Cell Surgery in Tijuana, Mexico., and continued to battle to the end. 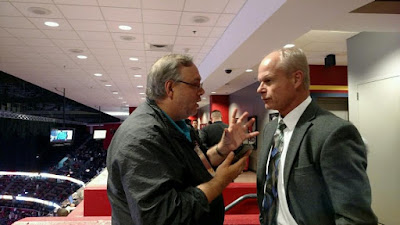 I spoke with his Son Mark Howe (pictured with me at the BB&T Center in Sunrise, FL) while I was covering a Florida Panthers game, and he marveled at his dad's will to
maximize his days in his later years.

But to realize what an incredible family he had, Mark, Marty and Cathy would all take turns caring for their father around the country.

Without the Stem Cell Treatments in Mexico, we should have been paying tribute to Howe during the past 18 months. We owe an assist to the Mexican doctors for keeping our icon longer than we expected too.

I admire Murray for not donating Gordie's brain for research. His father lived until he was 88-years old and there is no reason to add another reason about his death. Closure is a good thing.

I wish I could have been at JLA for Howe's Public Visitation. JLA has housed four Stanley Cups, an All-Star Game and now this event as we head into the stadiums' final year.

But at least I have This Platform to pay My Respects.

I have four great photos as well as the ability to communicate with My Followers and Friends on Facebook and Twitter.

And a whole lot more memories.

Wayne "The Great One" Gretzky said he felt that Howe is "The Greatest Hockey Player of All-Time." I agree with Wayne.

I also believe that if Gretzky was playing in Howe's Era, he wouldn't have broken as many as Mr. Hockey's records. He would have gotten battered around during The "Original Six" ERA. Gretzky probably would have amassed more penalty minutes and had a few more fights to protect himself.

But that topic will be discussed at a later date.

If the NHL retired Gretzky's No.99 throughout the league, then the league should do the same with No.9. I'm glad that Gretzky is pushing the NHL to do this and I have a feeling it will get done.

The Red Wings New Stadium should have Howe's name attached to it.

But I can't see that happening in this commercial age.

I hope Red Wings Owner Mike Illitch proves me wrong because after the Ernie Harwell firing controversy years ago by previous ownership, he allowed this broadcasting icon to retire on his own terms. Illitch cleaned up a major public relations mess!

It was unfortunate that Howe died during the Stanley Cup Finals.

But I'll say about Gordie Howe the same thing that I said about Muhammad Ali.

I Love You Mr. Hockey and Rest In Peace rejoining your lovely Wife Colleen.

Thanks for giving me some Unforgettable Memories that I've enjoyed and will last during the rest of My Lifetime!

I'll never forget you and nor will fans in Metro-Detroit, a place that I'm very proud to call My Hometown.

You were and always will be a legendary giant, icon and there will never be enough words in Webster's Dictionary to describe the impact on us you created.

If it weren't for You Mr. Hockey and the Red Wings 25-year consecutive playoff run, it would be tough to call Detroit "Hockeytown."

There is no doubt of the legendary sports figures in Detroit and Gordie Howe is at the top of my list. 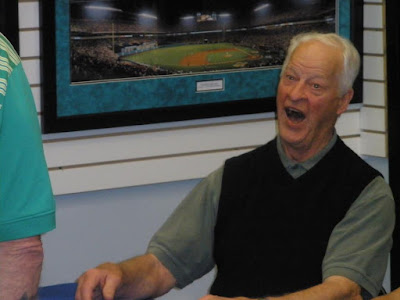 God bless in Heaven, Mr. Hockey and once again, thanks for the memories! You'll be missed forever!

But The Hockey and Sports World will Celebrate Your Death!

Scott Morganroth can be reached at www.scottsports33.com and is a member of The Detroit Sports Broadcasters Association.
- June 17, 2016