Throughout My 37-years in Sports Media, I've interviewed some of the most unbelievable and interesting personalities.

Some of the ones I've enjoyed are Minor League Baseball Players dating back to My start with the Fort Lauderdale Yankees in 1982.

Another one crossed my path during Spring Training when we covered the Detroit Tigers versus the Pittsburgh Pirates on Saturday March 12 at Joker Marchant Stadium. 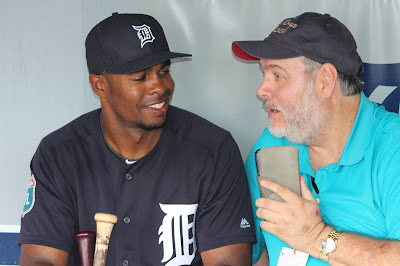 His name is Wynton Bernard. His smile reminds me of Magic Johnson and Torii Hunter. At age 25, the native of San Diego, CA, is one of the most pleasant people I've ever spoken to. Through the years, I've spoken to thousands.

But Bernard is not only a nice kid, he's one of the Tigers top prospects. He spent most of Spring Training with the Tigers gaining a great deal of exposure.

In five minor league seasons, Bernard has a lifetime .292 average with 112 stolen bases.

This season he started at AAA Toledo. With The Toledo Mud Hens, he hit .235 with 10 stolen bases in 45 games.

As of late, Bernard was sent down to AA Erie and has struggled with a .105 average (2-for-19) with one strikeout in five games.

Despite the setback, if he can get regain his confidence, Bernard could benefit from the struggles of former Tiger Anthony Gose, who was demoted to Toledo on May 16, 2016 .

Gose was hitting .209 with two home runs and seven RBIs in 30 games for Detroit. Unfortunately, for Gose, things have gotten worse as he's hitting. 190 in 25 games with one stolen base.

Gose's struggles could benefit Bernard's road to Detroit if once again, Bernard turns things around at the plate.

We'll see if Bernard is in a Tigers uniform during the September call ups when rosters are expanded, or whether he'll he be dealt by August 1, 2016 if Detroit is looking to make a trade at the non-waiver deadline.

During Spring Training, we had a great conversation and here is a Q &A Interview with Bernard.

Q: How do you like what you've experienced in your baseball career?

A: It's been kind of up and down actually. I was with the San Diego Padres in 2012 & 2013 and they unfortunately released me. So I was at a point where I had to find another job. I ended up going to an open tryout and I signed with the Tigers. I was one out of 100 guys. Since I've been with the Tigers, they've let me play everyday and it's been awesome. I started at Class A in West Michigan and won an MVP Award there and last year in AA Erie. I led all AA in hits, triples and stolen bases. It was a great experience.

Q: So should you find your way to Comerica Park, do you like the fact that a guy with your speed, and your ability to get doubles and triples is something that can benefit you in that particular environment?

A: Oh, yes, definitely! Comerica Park is so big that anytime I hit the ball in the gaps, I want to get the extra base hit for my teammates. There is nothing better than being on base with guys on second and third. Going up as a hitter, I just have to go up and give this guy a hand. It makes the game a lot easier. Doing things like that and using my speed to my ability will definitely help at Comerica Park.

Q: What have you learned from the likes of Miguel Cabrera, Victor and J.D. Martinez, etc... knowing you've had a chance to be on the 40-Man Roster being around these guys on a daily basis in Spring Training? 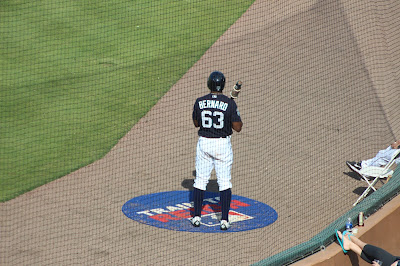 A: I like watching and I'm big on observing. Even like during the games now, I like watching other teams. I like to observe the guys concentration on all those levels. It seems like every time they go to the plate, they're locked in. And that's something I try to take to my game to. I like to be locked into every single pitch and not taking a pitch off. I just like to observe and look to see out if they're locked in and always focused.

Q: Is there any particular player in the Major Leagues growing up that you idolize or look at that you pattern yourself a little bit and duplicate?

A: There are guys I loved growing up obviously, Ken Griffey Jr, because he was a center fielder, who chased down balls in the gap. I like speed guys like Kenny Lofton. It's a good combination. I'm not a left-handed hitter, but they played center field, and Kenny stole some bases. So those are the kind of guys I looked up to that would always get on base, hit balls in the gap and that's the exciting part of baseball.

Q: What are some of the things you've gained during Spring Training?

A: It's been a combination. I was in Big League Camp last year and it's my second Big League Camp so I'm obviously more comfortable. Talking to the guys and everybody is always giving each other advice. Even if its not a Major Leaguer or two such as a guy who is younger. Major Leaguers who have been in the game are giving advice to everybody. So even when they're talking, I'm trying to pick up on their conversations, such as hitting and base running. The game doesn't change, but there is always something to learn. As long as I keep a willingness to learn, and stay confident in my abilities, I'll be fine. 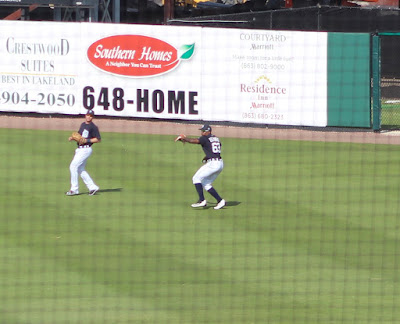 Q: How would you describe the power aspect of your game?

Q: Is there anything you want the Detroit fans to know about Wynton Bernard?

A: I can promise the fans that no matter what is they'll see a smile on my face. I might strike out and it doesn't mean that I'm not mad because I have a lot to be thankful for. My parents raised me to be a Happy Person. You'll always see me smiling at all times. When you see a Million Dollar Smile, that's Wynton Bernard!

Indeed, Bernard is a nice guy. I just hope he has the chance to play for the Tigers or gets a chance to play elsewhere. It will be interesting to see what the future has in store for Bernard in the next 90 days.

Speed is a valuable skill to possess and it reminds me of a left-handed pitcher. These players get longer looks because when you find a good player with these characteristics, they're a good commodity to have. They're always in demand.

Bernard is a hard guy not to root for. I've always enjoyed rooting for underdogs and Bernard is one.

Hopefully in the near future, his numbers will improve and the Tigers will have another asset to use in some way shape or form.

Scott Morganroth can be reached at www.scottsports33.com and is a member of the Detroit Sports Broadcasters Association.
- June 14, 2016