If there is ever a player to watch this Spring Training, and he'll get plenty of work do to the World Baseball Classic, it's 6-7 right-fielder Steven Moya.

The Tigers will be sending 15 players to the World Baseball Classic.

The towering left-handed hitter, who is a native of Rio Piedras, Puerto Rico, will be out of options if he's unable to make the Detroit Tigers Final Roster.

The 25-year old right-fielder signed with the Tigers as a non-drafted free agent in 2008.

In 2012, Moya had Tommy John Surgery, which caused him to play in only 59 games that year.

He progressed through the Tigers Farm System and made his Major League debut on September 1, 2014, as a pinch hitter in the 9th inning, where he recorded a single in his first career at bat off Austin Adams of the Cleveland Indians.

Following the 2014 season, Moya went on to play for the Glendale Desert Dogs of the Arizona Fall League.

In 23 games, he hit .289 with six doubles, one triple, five home runs, and 19 RBI. He was also named to the Arizona Fall League Rising Stars Game.

To date, Moya's MLB statistics are a .250 batting average with five home runs and 11 RBI.

In 2016, Moya earned $507,500 and bounced back and forth to the Triple-A Toledo Mud Hens. He filled in when Tigers starting right-fielder J.D Martinez dealt with injuries.

After batting .324 in June with four home runs, he was 3-23 in July and had defensive lapses in right-field.

This prompted Tigers Manager Brad Ausmus to send Moya back to Toledo to work on his defense in a "less stressful environment."

Is this a "Make or Break Spring Training" for Moya as he attempts to earn a permanent spot with the Tigers?

Time will tell, but he was in the starting line-up vs the New York Mets in Port Saint Lucie. He went 1-3 with a stolen base in the Tigers 5-2 loss to the Mets. 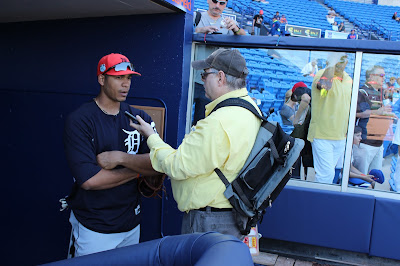 I spoke to Steven before the game and we talked about how important this Spring Training will be for him.

Q: Would you say this is an important year for you?

A: Every year is an important year. This one is too and I'm looking forward to doing good.

Q: I know that you're out of options. Would you say this is one of your best opportunities to make the club?

Q: Last season you had more playing time to put up more numbers to stay with the club. What was it like to have that much experience to play at the Big League Level? 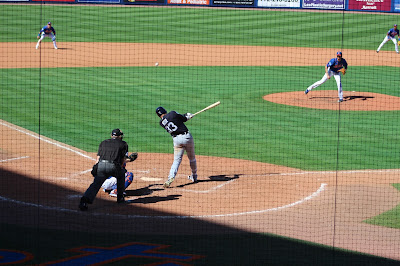 Q: How do you like playing in Comerica Park and how do you define your power?

Q: Are there any particular players that you've learned from on the club that have rubbed off on you?

A: I like watching Victor (Martinez) and Miggy (Cabrera). I like to learn as much as I can while I'm with them to improve my hitting.

Q: What areas of your game do you feel that need the most improvement?

A: Playing time (laughing). The more you play, the more you can improve. And if you can't play, you can't improve on anything. The game is where you can put your talents to use, abilities to improve, grow and get better.

Q: What about defensively? I know you were sent to AAA to work on your skills last season. Have you had the opportunity to work with coaches and strengthen up in that area?

A: I've worked with (Dave) Clark and we work on everything that we can work on to get better in that area. Even more in Comerica because it's a big ballpark and there is a funny corner in right-field, and right-center-field. We're working on every aspect of the outfield such as throwing, fielding and everything.

Q: Does playing in a spacious ballpark present more defensive challenges knowing there is a lot more ground to cover?

A: Yes, of course. That's what you have to work for, knowing how your ballpark is, and trying to get better in that area, so you can play good in your hometown.

Q: I know you're playing hard to make this club. Are you confident that wherever you wind up after this year, that you'll be able to get your opportunity somewhere?

Q: One thing a lot of people say Steve about Spring Training is you're not playing for one team, but you're playing for 30 since there are scouts everywhere. What are your thoughts about this?

A:That's right. That's right sir. That what I'm working hard to do and staying focused.

A: This has always been a great team and is now. We have unbelievable players, unbelievable persons and we can win with this team.

Q: I know there are a lot of Latin players on this team. Is this a good environment for you with Miggy, and Victor Martinez. Do a lot of these Latin Players rub off on you in a positive way?

A: Yes, yes. Having Latin players on your team that you can be around, they are your role models. I have to rely on them sometimes.

Q: Finally, how do you like playing for Manager Brad Ausmus? 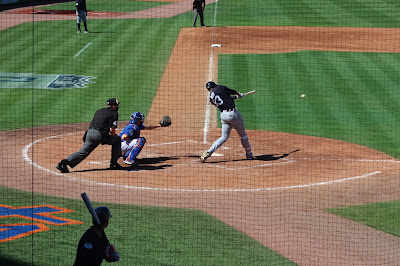 A: He's a great guy, great person and it's unbelievable to play for him.

Whether Moya plays for Ausmus on Opening Day when the Tigers face the Chicago White Sox, April 3, 2017, in the Windy City, remains to be seen.

However, as we focus on the present this will be an interesting story line to watch in Spring Training.

Moya will have an opportunity to compete for an outfield spot.

Detroit traded Cameron Maybin to the Los Angeles Angels during the winter.

Since Detroit is loaded with right-handed hitters, the Tigers could use a lanky left-handed power hitter in the line-up.

Regardless of how this turns out, I have a feeling Moya will be playing somewhere in 2017.

To say that this is a Big Spring Training for Moya is mildly understating that both sides are Out Of Options.

With the World Baseball Classic going on and as I mentioned before, Detroit's sending 15, Moya will get all the playing time, and experience he needs to impress Tigers Management a fair assessment on his future to see if he continues to wear the "Old English D."