I've been through enough Hurricanes through the years in two separate tenures living in Florida, but I have to admit, Hurricane Irma was one nasty storm/lady.

How do you put into perspective about the damage a storm causes?

Is it property damage, the loss of power, deaths that result in a natural disaster, the media publicity that an area gets during such adversity? 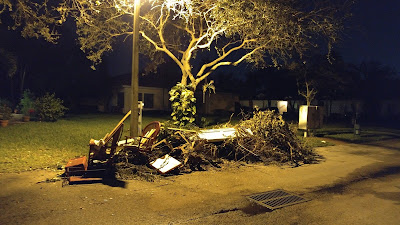 I suppose that depending on who you talk to, you'll get a different opinion but there is one common denominator and that is these storms are extremely stressful!

My wife and I just returned from a two-week vacation from Hawaii and heard rumblings that Irma was going to be trouble.

From Paradise To Paranoia. The whirlwind was in full force. The 48-hour race to get out of town was on.

We went from people to roadrunners and through the years I've been a Road Warrior and this was a challenge I would be ready to tackle.

There is no question that Social Media helped provide enough information to make a swift instinctual decision that was aided by my cousin Cindy, who told me there would be plenty of gas in Fort Pierce, FL., if we decided to evacuate.

When I heard comparisons that Hurricane Irma was being compared to a Category Five Hurricane named Andrew, then the decision was made for us.

Before I move ahead with what we did, here are the Top Five Costliest U.S. Atlantic Hurricanes.

Let's put these numbers in perspective.

Can you imagine 25-years later how much Hurricane Andrew would be worth to realize the severity of the storm? I get sick thinking about these numbers.

In Florida, Hurricane Andrew did $25.3 Billion in damage and almost all of the damage was caused by strong winds, therefore this storm has set new standards in building codes which exist now.

The extent of the damage was limited from Kendall to Key Largo and 99% of the mobile homes in Homestead, FL., were destroyed.

I've been told that the area looked like a war-zone.

Moreover, at the Homestead Air Force Base, most of the 2000 buildings on the base were severely damaged and rendered unusable. 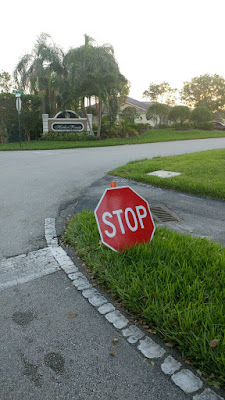 The Cleveland Indians were planning to move their Spring Training Operation to Homestead but that complex was wiped out, therefore, they moved to Winter Haven, FL.

I actually experienced Wilma and there was minimal roof damage, but that was taken care of by My Association, but the real impact I dealt with was going several days without power.

So when I kept hearing comparisons to Hurricane Andrew, this decision was an easy decision.

I'm really happy that My Parents were able to get one of the last flights out of Fort Lauderdale International Airport headed to Detroit Michigan on Friday September 8, 2017 so they could avoid this storm.

As far as my wife and I were concerned, we evacuated on Thursday Night, September 7, at 10 p.m and decided to visit family in Nashville, TN.

The photo provided here was on our way back home. But on the way north, traffic was bumper-to-bumper.

What we expected and what turned out to be has enabled me to put together a story where the title of this post is very appropriate and the roles, games I had to play being the pilot of an All-Wheel Drive Black Subaru Impreza, which would handle a lot of rain and get exceptional gas mileage.

1.  Checkers---Bouncing from one gas station to another. You never know where there would be availability. The rule of this trip is make a lot more stops and try not to get near a half a tank.

2. Chess---Trying to plan every move on the road as to when to leave and return home and minimize traffic. That wasn't easy the first night because when you have a Category Five headed in your direction, there are only three major highways that allow you to leave Florida heading north. 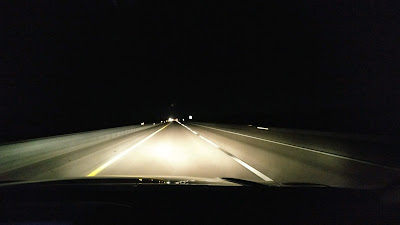 There is I-75, Florida Turnpike and I-95. I usually have a lot of success driving late at night, however, this challenge tops them all.

We were going 5 mph on the Florida Turnpike and saw a lot of disabled vehicles many of which ran out of gas, overheated or had accidents. There were a lot of drivers, myself included that decided to take u-turns on the Florida Turnpike and decided to backtrack and take I-95 North. It may have been a longer drive but at least the chances of running out of gas and being stranded decreased.

3. NASCAR Driver---When the traffic was fast, it wasn't hard to pass other drivers in an attempt to get out of this state ASAP. When things were slow, I had a Spotter otherwise known as My Brother-In-Law based out of Racine, WI., named Todd, who was giving me traffic updates on his computer and alternate routes in an attempt to avoid problematic areas during Friday's Insanity.

4. Golf---That was the card game that my Niece Emily wanted to play while we were in town. For a person that doesn't play cards much, I took a liking to this game.

5. Boxer---I felt like I survived 27 rounds and 43 hours of no sleep with this insane traffic, especially in Atlanta, GA at 9 pm which drove me crazy. Atlanta is a tough place to drive but during a weather crisis, this town can age you much faster. 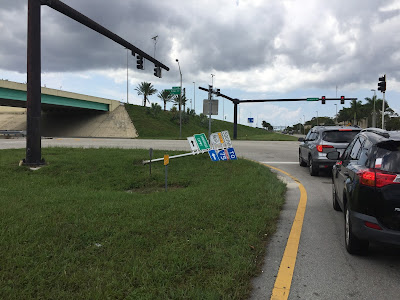 When I looked at My Sister-In-Law Denise and gave her a hug when we arrived at her home, she knew I was a fighter that was tired but went the distance, despite eating dinner at 11 pm Central Time. We went the distance to win this match with Irma by being safe.

6. Football---I needed College
Football on Saturday and the NFL on Sunday to wind down and totally decompress. Denise's black leather couch was one of my best friend's last weekend.

8. Indy Car Driver---Needed to have that mentality because on that circuit there are many road courses, but this time it was through hills and mountains.

9. Baseball---We had a curve thrown our way as we were planning to cover the Milwaukee Brewers vs Miami Marlins game at Marlins Park, on September 16-17, but that venue was switched to Miller Park in Milwaukee, because of the backlash of Hurricane Irma.

10. Runner---I had to do more sprinting on this trip due to more frequent gas stops than normal because of the constant concern to find fuel. 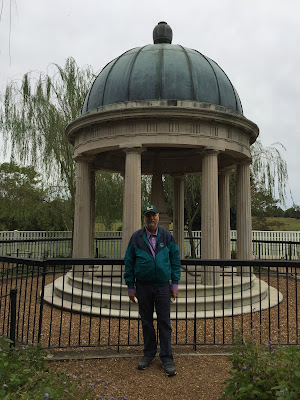 But the journey itself would allow us to take gas stops in college towns such as Gainesville and Tallahassee, FL., in addition to Valdosta, GA and Troy, AL.

I saw more U.S. Highways on this trip than any other through much of my travels where I've driven in all 50 states. But some of them are nice especially the ones that don't have as many traffic lights.

When we were in Tennessee, there was a lot of good sightseeing and saw the Home Estate of Andrew Jackson which came off my bucket list.

It was a neat place if you follow American History. It featured a Museum, Movie Theaters and where the seventh President and his wife Rachel were Buried which is where I'm standing.

Yet we still were glued to updates as to when to drive back to Florida.

We ultimately left Wednesday Morning at 8:10 am local time and made it home at 5:30 am the following morning Eastern Time.

We did take a different route on the way back since I had no desire to return to Atlanta as most of our drive was through Alabama. At the beginning of it, we encountered Tropical Storm Irma. Highway 231 in Alabama is one that I'll see a lot more in the future.

What we would return to when we returned to South Florida would not be a pleasant sight as there were billboards with signs torn off, signs knocked down, trees all over the roads, lots of folks with no power, no internet, living off of generators and an entire state that had adversity because nobody was getting off easy.

Irma was a Category Five at one point and I can only imagine what the cost of the damage will be when the numbers are counted.

In addition to the Marlins, another South Florida team that felt the impact of Irma was the Florida Atlantic University Football team.

FAU decided to play their scheduled road contest on September 9 against the Wisconsin Badgers in Madison while other Florida teams either cancelled or postponed their contests.

The Owls played Wisconsin tough by losing 31-14 and earned more than guaranteed money for the athletic department.

Wisconsin Athletic Director Barry Alvarez demonstrated class by offering to pay for any accommodations to FAU such as hotels, food, practice facilities, etc... if the Owls came north to play.

To demonstrate his appreciation for Wisconsin's hospitality, FAU Head Coach Lane Kiffin made a classy move by taking out a Full Page Ad in The Wisconsin State Journal thanking Badger Nation, mentioning Alvarez and Head Coach Paul Chryst for their collective generosity sharing their home with FAU for six days.

How did FAU do the following week against Bethune Cookman on Saturday, September 16?

While there are other storms lingering out there, Irma was the first one that I've ever evacuated because I've toughed a lot of them out. 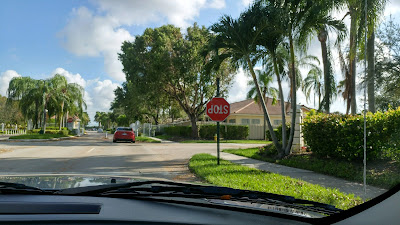 But evacuating definitely provides more anxious moments than one would believe because you never know what you will and won't come back to.

The Games Hurricane Irma Played go beyond what one can imagine and does put things in perspective. They can turn your life upside down as they did to this stop sign.

Enjoy every moment because you never know when it's the last.

That's called The Game of Life.

On a side note speaking of storms, former Badgers and current Houston Texans Defensive End J.J. Watt spearheaded a campaign to raise over $37 Million for those affected by Hurricane Harvey in the Houston Metropolitan Area.

Watt's a winner on and off the field.

After living in the north at the beginning of my life, there is no storm or ice storm that can compare to these hurricanes.

Adversity always play games with us but these storms take things to another level and Irma is a storm which will impact many of us because of the roller coaster ride it created.

Scott Morganroth can be reached at www.scottsports33.com and is a member of Detroit Sports Media.
- September 17, 2017

Oh I did not know. Yesterday I read something similar in http://nexter.org