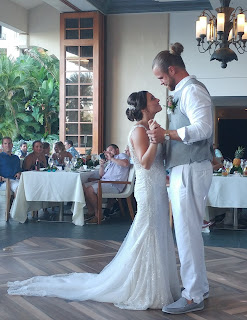 I can't remember the last time I took a trip over seven days which didn't have a Sporting Event connected to it to cover.

But there is no better place to take such a trip than to Hawaii.

From August 23-September 5, I had the opportunity to kill two birds with one stone.

I went on My Honeymoon and saw My Niece Brooke Morganroth exchange vows with her new Husband Jake Schifko.

Brooke and Jake's Wedding occurred on Saturday, August 26, 2017 in Kauai in a breath taking beach ceremony in front of over 60 family and friends.

It was the same night of the Floyd Mayweather vs Conor McGregor Fight in Las Vegas, NV.

I will talk about this fight later in the story.

Hawaii is an interesting place.

It was impossible for me to not look for Sports Updates of the Detroit Teams despite the six hour time difference. After all, we're in the Smart Phone age and with these little computers in our hand, My I-Phone 6-Plus gets a good workout.

For a Detroit Tigers game to start at 7:10 am local time is mind boggling.

During this time of the year, Hawaii doesn't switch because of Daylight Savings Time.

There is no doubt that it was easy to have jet lag and our travel time amounted to 12 hours covering four airports.

It's a different world in Hawaii.

I didn't rent a car for the first two days to get acclimated to the area.

But this Caged Lion managed to space out the rental to create a sensible schedule built around my tourist events and not get caught up in paying the outrageous food prices to the restaurants at the Grand Hyatt Resort.

I replaced Sporting Events with Ocean Rafting, A Trip To Pearl Harbor, Two Helicopter Rides, Ziplining and A Catamaran Ride, in addition to driving on Kauai and The Big Island of Hawaii seeing the Volcanoes and Black Sand. 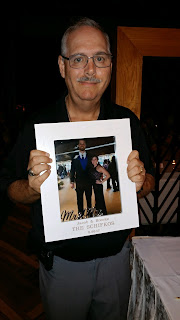 But for those Subway fans, in Kauai, a six inch sub is $4, which is a treat for the area, but later on the trip on the Big Island of Hawaii, no such special existed.

As I mentioned before, a crowd of over 60 family and friends made the trek to this Destination Wedding and to the credit of both families, each invested to make this an incredible event as Brooke and Jake turned their six-year courtship into marriage.

Once again, it was an unforgettable beach ceremony with the backdrop of the Pacific Ocean and the reception was outstanding afterwards.

Brooke and Jake gave My Wife and I a priceless gift by posting a photo of themselves at our wedding on January 1, 2017 at Milwaukee's Miller Park at the table to pick up the seat assignments.

I was very proud in this photo to hold this picture up and my wife and I couldn't thank them enough by showing our appreciation to these great youngsters! 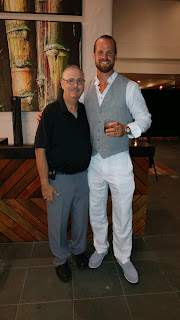 Jake was an usher at our event while Brooke overcame her nervousness of speaking in front of people to do an outstanding job reading a poem!

I joked with Brooke that this was good practice leading up to her memorable day.

I've always kidded around with Jake that at 6-8, if he ever moves on from his restaurant career, the NBA could use his services.

But it was hard to not look for Mayweather vs McGregor updates which did generate over $55 Million in Pay-Per-View Revenues.

I did manage to get two dances in because that was all my 54-year old body would allow.

But two days before the event, Jake's Brother Robert Schifko and I got into an animated debate in the pool at the Grand Hyatt Resort in Kauai as to who would win the fight.

Robert picked McGregor while I remained consistent with Mayweather, a prediction I made two months ago.

Robert deserved an "A" for his passion but I told him in the pool that I've been covering sports for 38 years and Boxing has always been one of My Favorites.

Mayweather won the fight by technical knockout in 10 rounds of this scheduled 12 round bout. 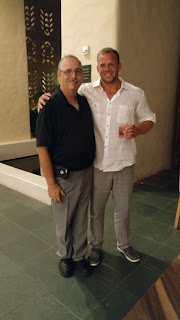 After the fight, Robert, who is pictured with me, came up to me with a serious look and said, "Scott, You Were Right. You definitely described this fight as it happened. You got me this time and You know what you're talking about."

That was worth a hug to Robert but more importantly, he earned my respect because he possessed no ego and by coming up to me and owned this one.

After the fight we spent some time together and I told him that I've interviewed Muhammad Ali, Sugar Ray Leonard, James Toney, Chuck Wepner, Angelo Dundee, the trainer for Ali and Leonard, who was a dear friend of mine, plus Boxing Historian Hank Kaplan along with many others in Boxing, thus, I'd like to think I have enough knowledge and insights as to what's going on.

I've learned plenty from these Fighters and I enjoyed sharing these experiences with Robert.

But beyond the interviews, I've watched lots of fights and truly understand why Boxing is called "The Sweet Science" because the smartest guy who takes the least amount of punishment does win.

It sounds so simple, but it's not.

As the wedding continued, I spent time with Jake's father Jack. 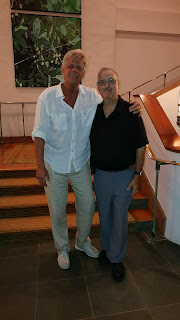 During the couple days leading up to the wedding, I had the great pleasure of getting to know the rest of the Schifko family.

But during the wedding, I saw Jack wearing a pin on his shirt that Symbolizes Fighting Cancer.

We talked and Jack, who is pictured with me, told me his second daughter Kari Schifko, 31, was recently diagnosed with Leukemia.

He wanted to stay in Michigan and miss this event to support his daughter while she is going through treatment, but Kari convinced him to attend.

Throughout the years, I've lost some close people to this dreaded disease.

The Cancer victim that hurts the most is My Grandfather Sidney Morganroth, who passed away at age 55 in 1973 while I was 10.

He died of Lung Cancer, but in his memory, I vowed to be a nonsmoker and have kept his legacy alive by staying away from that expensive deadly habit.

A very close friend and former colleague, who owned a restaurant in Michigan Gregory Nicholas was a victim of too much secondary smoke. Now Michigan has the Clean Air Act and doesn't allow smoking in restaurants, just outside of them.

In the past, I've bought autographed merchandise from My Friend Dick Vitale to support Cancer Research through "The V Foundation" and will always do anything in my power to support this dreaded killer.

I'm thankful that My Grandma Sophie Morganroth-Jacobs defeated Breast Cancer many years ago. 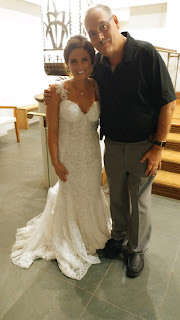 Recently, my own mother has beaten Lung Cancer because of her foresight to get a second opinion and took a proactive approach to go to New York University utilizing advanced medicine to her benefit. Although she's still dealing with breathing issues, she's been a trooper! I'm thankful she continues to plug away.

My message to Jack is I will continue to pray for his daughters recovery and I'm happy that he shared his information to me so that I can send prayers and hope my followers do the same.

But on August 26, 2017, the Real Stars of the night were Newlyweds Brooke and Jake Schifko.

In My Mind, Brooke and Jake were This Summer's Main Event!

I always knew Brooke would be a Beautiful Bride and anybody that has a different opinion needs to have their eyes checked!

It was nice to Not take a Reporters Notebook and Tape Recorder to be a fan of a personal piece of history.

Aloha to Brooke and Jake, and I Love These Classy Kids Very Much and it was a Privilege To Be At This Wedding!

Scott Morganroth can be reached at www.scottsports33.com and is a member of The Detroit Sports Media.
- September 15, 2017

Glad to know about these events. Keep up the good work. I also have to attend the grand business events in this month. There are 4 coming in the way and the first of them will be hosted on this Friday at the nearby convention center but rest of them are in other cities so I will have to manage to travel too.