What's Ahead For Lions?

If you're looking to keep your head coach employed, Lions QB Matthew Stafford knows the formula. 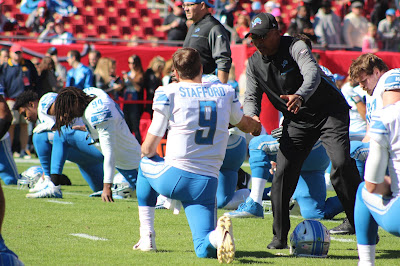 After throwing for 381 yards and a touchdown on December 10, 2017 on the road to defeat the Tampa Bay Bucs 24-21, Stafford had some interesting things to say about Coach Jim Caldwell's future.

Detroit's record improved to 8-6 and the Lions continue to remain in the playoff hunt.

Lions Coach Jim Caldwell is guaranteed of the team at least finishing with a .500 record.

After the Buccaneers game, the head coach addressed his job security and you can rest assure that anybody who addressed it Saturday would get the same answer we received in Tampa pertaining to his contract expiring at the end of 2018.

"We never, never ever, ever been in the practice of talking about contracts and anything of that nature, and we're certainly not going to start today," Caldwell said. "There's no (security) it's coaching. That's the way it is."

As for what's ahead for the Lions, on Monday Night, the Atlanta Falcons defeated the Tampa Bay Buccaneers 24-21 to improve to 9-5.

Detroit remains one game behind Atlanta but the Falcons need some holiday cheer to get into the playoffs. 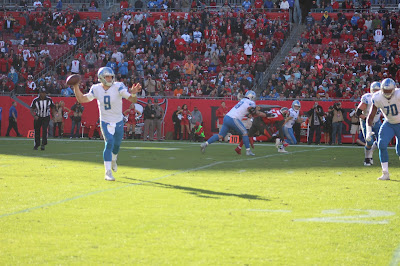 We all know how dangerous QB Drew Brees is, but the two headed running back monster combination consisting of Mark Ingram and Alvin Kamara are good enough to shred any defense.

Meanwhile, Kamara, has 652 yards carrying the rock with seven touchdowns. He's been an explosive receiver out of the backfield adding another 684 yards and five touchdowns.

Detroit needs this dynamic duo to have a big day.

On December 31, 2017, Atlanta faces Carolina QB Cam Newton, who is playing some of his best football leading the Panthers to a 10-4 mark, in Georgia.

In the Panthers 31-24 victory over the Green Bay Packers, Newton threw for 242 yards and four touchdowns. He had one of his favorite targets back as Tight End Greg Olson caught nine receptions for 116 yards and a touchdown.

The Lions lost to Atlanta, Carolina and New Orleans, therefore the head-to-head tiebreaker works against them.

First, the Lions have to win out against the Cincinnati Bengals, who just got crushed Sunday by the Minnesota Vikings 34-7 on the road. Like the Tampa Bay Buccaneers, Cincinnati (5-9) could be looking for a new head coach when "Black Monday" takes place on January 1, 2018.

Second, they also need to beat the Green Bay Packers.  With the Packers (7-7)  now out of the playoffs, despite 290 yards and three touchdowns from Aaron Rodgers, the future Hall of Fame QB took a pounding against the Panthers which led to three interceptions.

Rodgers missed eight weeks because of a broken collarbone. He woke up very sore on Monday and appears to have aggravated the injury returning too soon.

Rodgers was put on season-ending injured reserve and Brett Hundley will be under center when the Lions play the Packers December 31, 2017 at Ford Field.

Also, will the game be changed to a later time than it's current 1 pm slot and be on National TV?

In the past few years, when there have been playoff implications, the game time has been switched.

But once again, Sunday's action will give us more answers.

If Detroit loses at Cincinnati, then none of what we're discussing means anything. 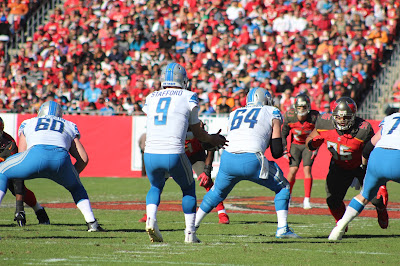 So the question remains, will Santa Claus deliver the Lions two victories and the Falcons two losses?

As for Caldwell, I'll continue to say this as I have all year.

If you fire him, who are you going to replace him with?

Are you going to bring in New England Patriots Offensive Coordinator Josh McDaniels, who worked with General Manager Bob Quinn in Massachusetts?  Even if this happens, there are no guarantees that this move would work.

McDaniels could be heavily coveted as 5-10 teams could be looking for head coaches on Black Monday, January 1, 2018.

The only other candidate who might make sense is Tampa Bay Buccaneers Defensive Coordinator Mike Smith.

Unfortunately for Smith, he was 10-22 during his final two campaigns which led to his dismissal.

Aside from that, as I've written about before and I'll say it again, the Lions best move pertaining to Caldwell is to keep him.

The Lions need to start by bolstering their running back position, because the only stats which are missing are lack of 100 yard games, in addition to 1,000 yard seasons.

Against the Bears, The Lions amassed 91 yards on the ground as a group led by Theo Riddick's 49 and Tion Green's 35. 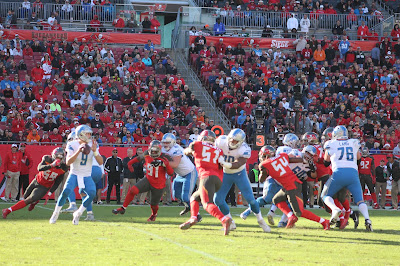 Unlike many teams in the NFL, the Lions are fortunate they don't need to look for a franchise QB.

They have a young gunslinger and stud in Stafford, 29, who is the ultimate competitor and plays through injuries.

Going into the Cincinnati contest, Stafford has 2,966 career completions and 34,223 yards. He has 212 touchdowns and 117 interceptions. He could hit the 3,000 milestone for completions against the Bengals.

Otherwise, he'll attain that milestone against the Packers.

Who would have ever have thought that back on December 19, 2010 that Detroit snapped a 26-game road losing streak at Tampa Bay.

How times have changed as Detroit enters its road game with Cincinnati with a 5-2 road record and is 3-4 at home. It's safe to say that road win number six, will be huge!

This is What's Ahead For The Lions.

Scott Morganroth can be reached at www.scottsports33.com and is a member of Detroit Sports Media.
- December 19, 2017