In sports, aside from interviews, there is usually one way to tell a story.

The numbers never lie and in life that's the common denominator.

My wife and I were back in Metro Detroit for a few days in early December of 2017.

We were extremely busy the entire trip as I always am when I return to Michigan.

Unfortunately, I haven't had the opportunity to come back home in recent years therefore, to pile what I need to in three days, I'd need 48 hour days to put a dent in what I'm attempting to accomplish.

With family, friends and my media commitments, my schedule fills up real quick, thus there is an extremely tight window to fit things in my itinerary.

I spend days planning the trip writing things down and calling the people to make plans as every minute counts to come up with a comprehensive calendar. Those that stay in touch the most get high priority when I return home.

Those that don't stay in touch get bypassed. It's easy to stay in touch these days with text messages, phone calls, e-mail and Facebook.

My wife and I contacted My Mother to wish her a happy birthday.

It would have been great if she was in Michigan to celebrate, but because of our vacation time, timing didn't work out.

Nonetheless, it was great to hear her voice and she was in outstanding spirits. The tone in her voice was evident that she appreciated the call.

Ironically, this day brings back other special memories.

My wife and I went on our first date.

Thankfully, this was the last first date I ever went on and I am forever grateful as to how things have turned out.

The day started out with seeing some long time close family friends, Max and Nancy Spector, who had the opportunity to meet my wife for the first time. They were kind enough to meet us at the hotel and we spent about 90 minutes with them.

We took a group photo with them. 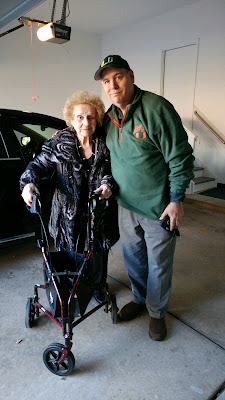 From there, the Victory Tour continued as Candy and I made a 40 minute trek to Bloomfield Hills, MI, to see the First Ageless Wonder, My Aunt Mary Must.

Aunt Mary is 98-years old and after spending about an hour with her, anyone who couldn't recognize that this woman is as sharp as she is needs to invest into a dunce cap.

Her family owned a successful dairy business and recently sold it.

She worked there and this gave her a sense of purpose.

When an individual can keep their mind active at any but especially a later age, that's an extremely healthy situation!

We had a great time getting caught up with Aunt Mary and she loved Candy!

Then again, everybody loves Candy!

Thankfully, Aunt Mary's sons Alan and Joel Must, along with her daughter-in-law Suretta keep tabs on her. They take her to the doctor and make sure that all of her shopping, etc... is handled.

This day was tough for Aunt Mary as her late daughter Madelon Seligman died recently at the age of 74 because of Cancer. She was born the same day as my mother in 1941. Aunt Mary's walker has a photo of Medelon on it.

I don't know of an existing family member that has ever lived to be 100-years old and I hope Aunt Mary becomes the first.

Despite Madelon's birthday, she was smiling that we were there and when we come to town in the future, there will always be time for this remarkable woman!

Here is another person who looks in fantastic shape. 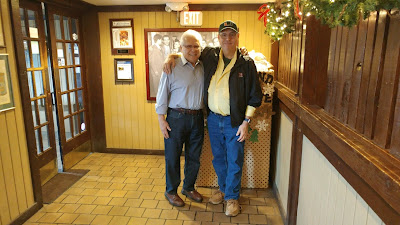 He is the former owner of the Highland House in Highland, MI.

He turned over his ownership to his son Rob.

Despite relinquishing ownership, Ryeson is a silent partner of this 42-year old Iconic Restaurant located 30 miles away from Pontiac, MI. He shows up on a regular basis to greet customers and always monitors the books.

Gene Ryeson is another example that an active mind keeps him impressively on the road to the glorified century mark.

There is no doubt that Gene still feels a void since the loss of his late wife Diane, who was one of the nicest people you can meet.

There aren't enough words in Webster's Dictionary that can define how genuine Diane was. I truly loved Diane!

Thankfully, Ryeson is around his family, the loyal customers, plus new ones, and his smile is as bright as the Florida Sun.

I worked at the Highland House when I was in High School from 1978-81, and when I returned home during the holidays from college, I would work a couple days to have extra spending money.

In late 1986, I returned to the Highland House and took an interim position in a managerial capacity to straighten out issues in the kitchen.

Ryeson trusted me to turn things around and gave me all the tools and support I needed to get things done. We would work until late at night and I gave him updates.

He knew that I would leave in January to take a baseball job as the Director of Public Relations in Gastonia, NC as I worked for the Texas Rangers Class A affiliate which ultimately produced 12 major league players and coaches.

He made sure I earned enough money to take a trip to Hollywood, FL, so I can get this job in Sports Administration.

Once again, my adopted uncle had an opportunity to spend time with my new beautiful significant other as he would tell her stories of our incredible history together.

He always picked my brain when dealing with employees, customers and I was proud to use my Media, Sales, Psychology and BA Degree in Communication from the University of South Florida to brain storm on how to handle situations.

We also enjoyed talking about life and when I needed advice, he was there to provide it. A one-in-a-million person and we need more like Gene!

Ryeson will continue to be on the Victory Tour when I return home.

The Third Ageless Wonder is My Uncle Albert Kroll, who is 90-years old. 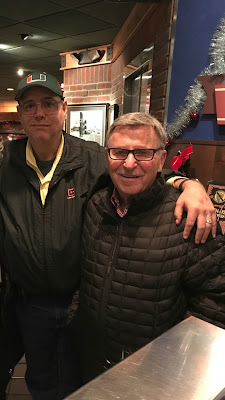 The last time I saw Uncle Al was at his Sisters and My Grandmother Sophie's funeral in 2000.

With the cooperation of My father and Aunt Judy, he was more than willing to let me do the eulogy of my grandmother.

And, I was determined to give her a sendoff to heaven for the ages! My Grandma Sophie and I were as close as any two people can be!

I'm forever grateful that my family allowed me to be the only speaker to do the eulogy.

On this night, Uncle Al, Aunt Barbara, My Cousin Ron and his wife Helene met Candy at Buddy's Pizza in Farmington Hills, MI. They gravitated to Candy!

In my opinion, Buddy's serves the best pizza in Michigan! There is nothing close!

You want to talk about a sharp individual, Albert is it.

He founded Kroll Construction in 1961 and I went to their website.

He's definitely adapted to the times understanding how the industry has changed in many ways through advanced technology. The methods of doing business is much different these days as sales are more consultative and less high pressure.

Yet, this family business is as strong as ever and continues to be one of the longest home improvement companies in Metro Detroit. The potential shelf life seems limitless.

Uncle Al told me he works out at 5:30 am and then goes to work everyday. While he's not listed as an officer anymore, his involvement is definitely evident. He's another example of an incredibly active mind at a later age.

He remembered a time when he bought me a winter coat and I forgot all about that.

We talked about many other things plus these people had the opportunity to meet the newest member of the family.

You guessed it, Candy.

Future visits will include cousins Todd, his wife Jennifer, Brian and perhaps others. 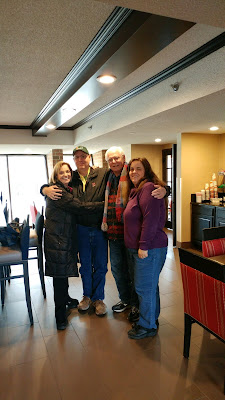 I expect there to many more great times with these individuals so Candy can get to spend time with family members that were unable to attend our wedding on January 1, 2017.

In horse racing, a legacy is defined by the animal's ability to win the Triple Crown.

Winning The Kentucky Derby, Preakness Stakes and Belmont Stakes are what can turn regular horses into icons.

The combined ages of these Three Ageless Wonders is 273.

This is the most important number of this story with the remarkable longevity attached to these individuals.

It's hard to imagine or believe that Gene Ryeson is the youngest of the group at 85, but he is nonetheless.

Yet if you look at the photos in this story, they all look absolutely fantastic!

Unfortunately, the past 15 years has not been very kind to me with the numerous operations and hospital stays I've had.

It's been documented before and I'll say it again that in 2017, I was in the hospital five times, yet with Candy's help, I survived and feel pretty good to date.

On this unique date of Pearl Harbor Day of December 7, 2017, the opportunity to spend time with all of These Iconic Group Of Individuals certainly made this an Incredible Trip!

I expect more Replays In The Future!

Scott Morganroth can be reached at www.scottsports33.com and is a member of Detroit Sports Media.
- January 20, 2018