The Trade That Wasn't Made

During NHL All-Star Weekend in Tampa Bay from January 27-28, Detroit Red Wings Defenseman Mike Green found himself answering a lot of questions about where he could find himself at the trade deadline at the end of February. 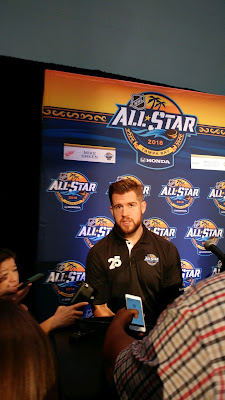 Would he be happy to return to the Washington Capitals?

Green politely answered every question in a 25 minute media session.

But one thing remained consistent during his questioning.

He kept telling the media how much he enjoyed playing for the Detroit Red Wings and really never wanted to leave.

Green does have a full trade clause in his contract and would later indicate that the only teams he would waive it for were the Capitals and Tampa Bay Lightning.

But there was one major thing which prevented a possible trade.

Green sustained an upper body injury which caused him to miss games, therefore, teams wouldn't trade picks for an unrestricted free agent rental which could be damaged goods.

During Green's Press Conference, I did manage to slip in some questions as he provided some insightful thoughts about different subjects.

Q: Do you relish the opportunity that you can be a veteran player to mentor and teach a lot of these kids since you've been a Red Wing?

A: I just think it's a matter of understanding the game. I don't think you can teach these guys much because they're so skilled and talented. My approach is getting them to understand how to be consistent. To be honest, I've learned a lot from them too. This next generation of young guys is incredibly talented, incredibly focused and it's great to see.

Q: The one thing I've noticed with these young guys is they play with an incredible amount of energy. Do you draw from that energy? 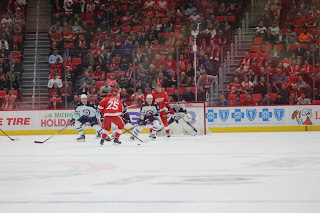 A: It's definitely helped me. It's caused me to change my workout routines and approach because these guys are so fast now that I have to keep up. But playing with guys like Dylan Larkin create so much energy the way he skates, moves the puck up the ice, along with Andreas Athanasiou, Anthony Mantha and some of the other kids coming up. So it does create a lot of energy. I think that's what's exciting about Detroit is that they have a lot of the great energy young players coming up and will be good.

Q: In the new NHL, enforcers are not as common but the Red Wings have one in Luke Witkowski. When he does play, how would you describe what he's meant to the Red Wings this year?

A: I think immeasurably. At times, when we come out and have played with high energy, it's because Luke's in the line-up. He creates that sort of energy for us when he is there. Not only that, he's an utterly great teammate and player. It's been a pleasure playing with him so far.

Q: When you look at the banners in the rafters and all the great players who have played for Detroit, and the town itself, how does it feel to be playing in "Hockeytown" compared to other cities? 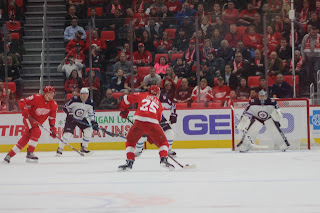 A: I don't know if you can compare it when you're with an "Original Six" team. Obviously, I've played on a different team. You can't compare it with Detroit. Walking in the dressing room, all the pictures of all these old players, captains, and obviously the amount of Stanley Cups they've won on the walls. It's pretty special. You have to take a moment to kind of respect and appreciate what that organization has done.

Q: Tell me what it's like to play in Little Caesars Arena (LCA) and give me your thoughts about Joe Louis Arena?

A: It's been great. The facility is incredible. We're fortunate as players that we have this incredible work out facility and spoiled in that sense. 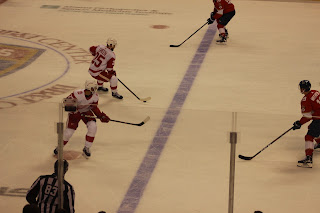 Comparing to "The Joe," it's different and interesting starting the season at LCA. We wondered what kind of energy it would bring knowing what Joe Louis had and represented, which with it's history in itself and you could feel it. It's about creating the energy now here at Little Caesars Arena and building a legacy there.

Q: Do you know much about the old Olympia Stadium?

A: I respect it because when I first got to Detroit, I read this book on the history of all the buildings, and the history of the Olympia building at the time was creative and was pretty cool. When you're in Detroit, it's a pretty incredible city and what's transpired over a long period of time.

Whether the 32-year Green gets a contract remains to be seen. He definitely does embrace the history of Detroit Red Wings Hockey. Anybody that researches previous stadiums comes across as a traditionalist which is tough to find nowadays.

When you're rebuilding, it's vital to have veterans to provide a positive influence on the younger players that demonstrate leadership, plus lead by example.

But as we stand right now, The Trade That Wasn't Made could pay dividends in the immediate and foreseeable future.