There are just a few hours left in 2011 as we get ready for another calender year.

So what better time to break down the Top Holiday Sports Traditions than now.

Which sports own what particular holidays? 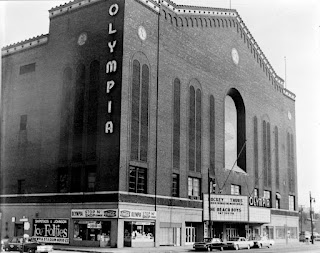 1) New Years Eve in Detroit is big for Red Wings fans that began at the Old Olympia Stadium and carried over to the Joe Louis Arena. When I'm back in Detroit, I make it a point to cover the New Years Eve event but when I'm not at home, then I usually stay inside to avoid the crazy drunk drivers.

One New Years Eve I'll never forget was on December 31, 1990. The Michigan State Spartans defeated the USC Trojans 17-16 and I really enjoyed covering this game. I was in the midst of a cross country drive and it worked out where I could fit this in on the schedule. The Sun Bowl in El Paso Texas has been a New Year's Eve tradition on CBS for many years.

2) When there is no conflict with the NFL on Sunday, New Years Day or January 1 has always been a day to watch College Bowl Games. There used to be several bowl games played including the major ones, The Rose, Orange, Sugar, Fiesta and Cotton, in addition to the Outback, Gator and Capital One. This year the Rose Bowl and Fiesta are on the same night while the Sugar, Orange and Cotton will be played in prime time on other evenings. Nevertheless, if you're a college football junkie, this is a great day to stay home and have multiple TV's running.

I've had the good fortune to cover a Rose, Capital One and Orange Bowl. I enjoyed covering the Rose Bowl Parade and Game in one day. It was a long day but a lot of fun.

3) A new tradition that is on NBC is the NHL Winter Classic on January 1 or 2 depending on the NFL schedule. These outdoor contests, which features snow falling on the players thus forcing them to make adjustments in their games, are played in baseball or football stadiums. I'm looking forward to the day that the Detroit Red Wings get to host one and hopefully they'll play the game at Michigan Stadium (The Big House) before 100,000 fans to set new attendance records.

4) Christmas Day belongs to the NBA and this year there were five games played on three networks. If a new labor agreement wasn't reached and the Christmas games were canceled then there would have been no regular season because of the amount of money and exposure lost.

5) The Detroit Lions and Dallas Cowboys own Thanksgiving Day. I am glad that the NFL added a prime-time contest to complete the holiday.

6) Sunday, Memorial Day Eve, goes to Auto Racing as fans can enjoy the Indianapolis 500 followed by NASCAR's Coca Cola 600, the longest race of the season. If there is a rain out then the races are run on Memorial Day.

8) NASCAR usually has a race at the Michigan International Speedway in Brooklyn, MI., in the Beautiful Irish Hills on Fathers Day. There are also a full slate of Major League Baseball Action.

9) July 4 belongs to Major League Baseball as fireworks shows follow after games. Tennis and Wimbledon usually play around this time, in addition to the Nathan's Hot Dog Eating Contest on Coney Island in New York.

10) Labor Day is predominantly for Major League Baseball as the pennant races begin to reach their final stages. Fans also turn their attention to the start of the NFL Season with fall just weeks ahead.

I want to wish all of My Readers and Followers a Happy and Healthy New Year. Enjoy your sports and may all of your dreams come true.

Scott Morganroth can be reached at scottsports33@aol.com.
- December 31, 2011