It's hard to believe that a week has passed since the death of legendary Penn State Coach Joe Paterno.

During that entire weekend, I felt extremely connected to this story because of the significant people that I saw throughout. 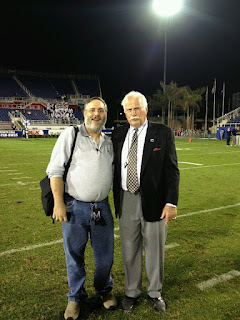 It began on Saturday January 21, at FAU Stadium during a College Football All-Star Game "The Battle Of Florida" which was an opportunity for players to showcase their skills for Pro Scouts. The contest featured legendary coaches Bobby Bowden and FAU's recently retired Howard Schnellenberger, who was making his final appearance on the Owls Sidelines.

During the post-game joint press conference with the two coaches Bowden and Schnellenberger, they  wondered if Paterno had passed away earlier as earlier reports pre-maturely indicated.

Throughout the evening, writers kept checking with the media outlets on their computers, cell phones, Twitter as CBS Sports and the Penn State Newspaper had to retract their stories. An editor and writer lost their jobs.

Schnellenberger was 2-1 versus Paterno when he was at the University of Miami. Meanwhile, Bowden and Paterno battled for the all-time Division I FBS wins total.

Paterno owns the record with 409 while Bowden finished second with 377. Bowden's total would have been 389, but FSU had to vacate 12 victories due to a March 6, 2009 NCAA ruling requiring Florida State to forfeit the wins "for any games in which an ineligible player participated."

Nevertheless, "The Battle Of Florida" was overshadowed by Paterno's pre-mature death.

Both Schnellenberger and Bowden weren't concerned about Paterno's handling of the Jerry Sandusky Sex Scandal. In the end, they knew college football was far better with Paterno than it would be without him. On this night, positive comments were all you were going to hear from these two legendary coaches.

To this day, I still believe Paterno should have coached Penn State the entire season. There were mistakes made with the university's administrators because he informed them of what transpired and the incident was pushed aside. Seemed like a cover-up that nobody thought would ever explode like it has. Paterno was being punished for something that happened years ago. 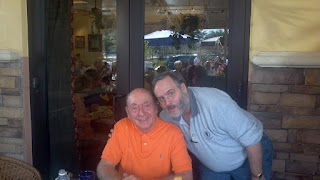 Hours later, I drove up I-75 North and saw My former colleague at WXYZ Radio in Detroit, Dick Vitale at The Broken Egg Restaurant in Sarasota (Lakewood Ranch) Florida. The Hall Of Fame ESPN Announcer arrived home during the early morning hours after covering a college game in Pittsburgh and sat in his usual spot at 10:30 am.

Vitale is currently working diligently to raise $1 Million for the seventh straight year on behalf of the Jimmy V Foundation For Cancer Research in honor of his late close friend Jim Valvano.

When I told Dick about My Grandfather Sidney Morganroth, who passed away at 55 because of Lung Cancer in 1973, we shared a somber moment. I told Dick that I've kept my promise 40-years later to honor My grandfather's memory to not smoke and he smiled. I also told Dick that from this point on that I will promote the Jimmy V Foundation anytime I can.

Like my grandfather, Paterno died of Lung Cancer but at the age of 85. Vitale and I were just hoping that this Sandusky situation doesn't overshadow Paterno's legacy.

But I came away from that weekend proud to be with Bowden, Schnellenberger and Vitale. Yet, I wish the subject matter would have been more pleasant.

The Battle Of Florida saw Bowden's North team crush Schnellenberger's South squad 51-3. During the course of the weeks events, there were 140 scouts, 29 NFL teams, four Canadian Football League representatives and one from the Arena Football League.

Yet, in the end, once again it was overshadowed by Joe Paterno's declining health that resulted in his death Sunday Morning.

Former ABC News Anchor, the late Frank Reynolds was a guy that I idolized growing up. Just because my specialty is sports doesn't mean that you don't learn from those doing the news.

Reynolds would have had a field day with this pre-mature death of Paterno's fiasco.

On March 31, 1981, during the coverage of the Ronald Reagan Assassination Attempt, White House Press Secretary James Brady was erroneously reported by all three networks as having died from a head wound. Another report arrived that Reagan had died.

Reynolds looked at his staffers and angrily told them to get the information straight and accurate.

I know that if Reynolds was on the air, if he lost his composure again that Paterno had pre-maturely been announced as dead, I'd hide for cover if I were his staffers. Frank defines professionalism in every sense of the word.

I've learned a lot of lessons from Frank in 33-years of Journalism and when I visited his grave site at the Arlington National Cemetery, in Virginia, I made sure Reynolds heard my words loud and clear.

All I can say is God Bless to Howard Schnellenberger, Bobby Bowden and Dick Vitale!


Scott Morganroth's blog can be seen at www.scottsports33.com and he can be reached at scottsports33@aol.com.
- January 29, 2012

The Panthers Response Vs Dallas

BY SCOTT MORGANROTH The Florida Panthers just concluded a 3-1 road trip with stops in Tampa Bay, Carolina and Detroit. After hammering the ...