The New York Giants 21-17 victory over the New England Patriots sent shock waves to the rest
of the NFL.

Just get in the playoffs and play your best football in December and January, as they became the first team in NFL history to lose seven games and win a Super Bowl.

The Giants were 7-7 in December and made it to the playoffs by defeating the Dallas Cowboys 31-14 to win the NFC East Title in the final week of the season, finishing 9-7.

By winning the division title, New York earned a home game and dispatched the Atlanta Falcons 24-2 in the opening round. Atlanta's only points came off a safety.

The Giants took their act on the road as they defeated 15-1 Green Bay 37-20 in the second game of the tournament in frigid Lambeau Field. They prevented Packers MVP QB Aaron Rogers from leading Green Bay to its second straight Super Bowl Championship.

The NFC Championship Game would be hosted by the 13-3 San Francisco 49'ers. But the Giants wouldn't be affected by the three hour time difference as they earned a 20-17 overtime victory.

What would it take for New York to win the Super Bowl over the 13-3 New England Patriots? It would take an MVP Performance by Giants QB Eli Manning as he threw for 296 yards and one touchdown. Manning became the fifth player in Super Bowl History to win two MVP Awards and he accomplished that twice against the New England Patriots. 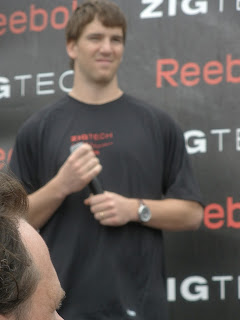 This MVP came in the stadium that his brother Peyton built---Lucas Oil Stadium in Indianapolis.

The Giants played good defense. They sacked Patriots QB Tom Brady twice and forced him to throw one interception. Brady had a safety on the Patriots first possession of the game.

Ironically, my good friend Eddy Alvarez, who is my AT&T Dealer in Deerfield Beach, Florida, asked me an hour before kickoff as I was buying my new tablet, if there was going to be interesting play to watch out for.

I told him that there would be a two-point play of some sort. When Brady had that safety, Alvarez sent me a complimentary e-mail after it happened.

In the end, this Super Bowl rematch of four years ago would be decided in the final minute as the Giants got a late touchdown by Ahmad Bradshaw, a play designed to set up a field goal. However, he inadvertently backed in and scored. This play will go down as one of the classic endings in Super Bowl History.

Eli Manning's legacy has now been cemented as a two-time Super Bowl Champion. With two Super Bowl rings, he owns family bragging rights over Peyton and his father Archie.

"Don't worry about the win-loss regular season record. Just qualify for the post-season."

As long as a team peaks in the playoffs, that's all that matters. You can bet every coach in every sport on all levels will use the Giants improbable underdog ride as motivation to inspire players to win a championship.

That's what will make Super Bowl XLVI stand out for years to come.

Finally, the Green Bay Packers won last years title with a 10-6 record and add the Giants 9-7 mark, and the combined record for both squads is 19-13.

Scott Morganroth can be reached at scottsports33@aol.com and his blog can be seen at www.scottsports33.com.
- February 27, 2012