On Saturday Night, I was channel surfing and stumbled onto FOX's presentation of the UFC. 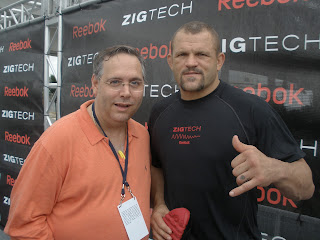 There was a familiar voice from the past as former Detroit Red Wings Play-By-Play Announcer Mike Goldberg was calling the action. Up to this point, my only familiarity with the UFC was meeting legendary fighter Chuck Liddell at the Super Bowl in Miami a few years ago. Otherwise, I knew nothing about this sport.

After watching three matches Saturday Night, I probably still know very little but came away totally impressed with these athletes. To get kicked in the head, choked, head butted and punched in the face, I can understand why the fights were limited from 3-5 rounds and last five minutes.

The punishment these fighters take is amazing. After what I saw Saturday Night, if a boxer were to enter the octagon, I wouldn't give them much of a chance because of the quicker pace and additional skill level of mixed martial arts, boxing and wrestling all rolled into one.

But as impressed as I am about the sport, which is here to stay, the only thing the UFC does lack is the History Of Boxing.

The UFC realizes that as it lacks the tradition and name recognition that boxing has.

I'm amazed how the UFC generates large audiences for their pay-per-view events. Boxing can thank Tyson for his pay-per-view revenues. After watching the excitement Saturday Night in front of a packed United Center in Chicago, I can see how they generate the revenue through pay-per-view.

I would never order a pay-per-view UFC event because I would rather use the $50 for gas to take a trip to Clearwater Beach, Key West, Sarasota, Orlando and Daytona, Florida.

But this weekend, the UFC did earn my respect as a fan and thanks to their relationship with FOX, a free event gave them much needed exposure.

Boxing built it's audience this way for years with ABC, NBC and CBS broadcasting weekly fights on the weekend.

The reason for boxing's demise is there are too many champions in too many weight divisions. Fighters are not as hungry as they used to be because of the large payouts and rarely fight. There aren't many good American fighters for the public to follow. There are not enough major fights to keep the sport in the news plus, the public is looking for the next heavyweight which it would recognize and dominate.

The UFC expects its best fighters to perform regularly and is taking advantage of boxing's decline. More power to the UFC.

Boxing's promoter's let politics and money get in the way of creating the mega fights the public wants to see. That's why the UFC is knocking out boxing and will continue to in the future unless things drastically change.

However, my heart still belongs to boxing since that's what I grew up following my whole life.

My photo portfolio includes Ali, Leonard, James Toney and legendary trainer Angelo Dundee. There are a lot of championships with this group.

Scott Morganroth can be reached at scottsports33@aol.com and his blog can be seen at www.scottsports33.com.
- January 30, 2012