The FAU Owls and FIU Golden Panthers have more things in common besides being rivals in the
Sun Belt Conference and being small mid-major schools in South Florida.

Over the past few months, both schools have made changes with their revenue producing sports where each have taken a hit in the Public Relations Department.

On December 1, 2011, Carl Pelini became the successor to Howard Schnellenberger as he hopes to revive a 1-11 program. This is Pelini's first head coaching job and FAU is paying him $375,000 to rebuild the program. When Pelini was hired, his introductory press conference was handled poorly. He told the university's Sports Information Department to hold an impromptu Press Conference and gather as many media as possible regardless of how many didn't make it without knowledge.

I was told later by the FAU Sports Information Department that Pelini's accessibility would be far less then Schnellenberger, who would be extremely accommodating realizing how necessary it was to gain the free publicity to promote his program.

Pelini is due to have his first spring game soon and although I've never met the guy, he isn't going to get much of a honeymoon period if the Owls continue to lose over the next few years.

Schnellenberger is an icon and built the program from scratch while Pelini has more recruiting tools to work with, in addition to the new stadium. It's his job to win and put rear-ends in the seats to pay for his salary. 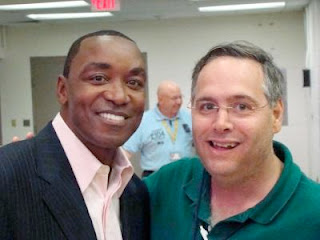 Speaking of putting rear ends in the seats, down in Miami, Hall of Famer Isiah Thomas averaged 1,071 for the Golden Panthers in three seasons while attendance was four times that amount on the road.

However, Thomas, who was hired in 2009 to a five-year contract, never had a chance to see his rebuilding project through. He was fired after three seasons posting a 26-65 record.

Prior to Thomas arrival, FIU's last winning season was in 1999-2000 and its winning percentage of .315 since, according to STATS LLC, is 329th Out of 344 Division I Men's programs that competed over the last 12 years.

I've known Thomas since the late 1980's and I know that he wouldn't have taken this job if he didn't have a chance to see it through.

This is a guy that loves basketball and didn't take a base salary his first year agreeing to a deal where he would receive nearly half of any gross revenues from ticket sales, commissions collected on food and beverage concessions and sponsorships.

Thomas put FIU on the map and the average college coach usually gets five years to recruit his players and institute his philosophy.

The timing couldn't have been worse for FIU to make this change and I do believe it will backfire. It's not like the university is a cash cow since it's football stadium holds 20,000. There will be a small budget and Thomas controversial firing only puts a stain on the program. What reputable coach would come to FIU with a sub-par basketball stadium?

Thomas will likely land back in the NBA while FIU will go back to being an unknown commodity that is the Miami Hurricanes infant brother.
FIU's Football Program is best known for a controversial brawl that it had with the Hurricanes at the Orange Bowl on October 14, 2006.

As for Pelini, I hope his second impression is better than his first. There is no doubt that both situations are under a major Public Relations Microscope and we'll see how they both play out.