When I lived in South Florida from 1981-1984, the only chance I had to see the Detroit Tigers in Spring Training was in Lakeland.

The Tigers never came to Pompano Beach to play the Texas Rangers, Fort Lauderdale to face the New York Yankees or Miami to meet the Baltimore Orioles.

But that was then because Baseball's Spring Training Landscape has drastically changed!

The Cactus League, based in Arizona, took a page from the Movie "Field Of Dreams." If you build it, they will come.

Five former Grapefruit League Teams made the trek west out to Arizona.

For years, the Kansas City Royals played in Fort Myers, Florida and then moved to the Baseball City Complex Haines City.

The Texas Rangers were in Pompano Beach then moved to Port Charlotte.

For decades, the Cincinnati Reds played at Tampa's Al Lopez Field and eventually moved to nearby Plant City and Sarasota.

The Cleveland Indians were supposed to move to Homestead but Hurricane Andrew sent them to Winter Haven.

Dodgertown in Vero Beach was the home to the Brooklyn and Los Angeles Dodgers until just a couple years ago.

Now the Royals and Rangers share a stadium in Surprise, AZ. The Reds and Indians share a complex in Goodyear, AZ. The Dodgers moved to Glendale and are neighbors with the Chicago White Sox.

It's hard to believe that the  Detroit Tigers, Minnesota Twins and St. Louis Cardinals are the only Midwest Teams in Florida.

I'm amazed that the New York Yankees ever left Fort Lauderdale since their fan base is off I-95.

But considering their late Owner George M. Steinbrenner lived in Tampa, I understand why the Yankees relocated. The New York Mets once trained in St. Petersburg but they moved to the East Coast of Florida to be near the transplants and fill the void left behind by the Yankees.

As I glanced at the Spring Training schedule two weeks ago,  I was surprised to see the Tigers and Mets playing Sunday, April 1, 2012 in Port Saint Lucie. However, they could have played at two other I-95 locations.

The Washington Nationals are in Viera, while the St. Louis Cardinals and Florida Marlins are in Jupiter, Florida. 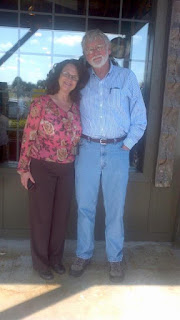 It's impossible for me to get to away games during the week with my crazy schedule. But this worked out fantastic because I couldn't ask for a better Sunday drive then to see my close cousins Cindy and her husband Peter Spyke in Fort Pierce just 15 minutes north of Port Saint Lucie at 8:30 am, then going to cover the Tigers Vs Mets.

When we made plans, I told Cindy, "How often do I get to cover the Detroit Tigers in your backyard?"

She added, "There was no way I'd miss this opportunity to get together with you."

With gas prices hovering around $4 per-gallon, Port Saint Lucie was a bargain compared to Lakeland. It was a 90 minute drive compared to four hours, plus I was able to spend time with two of the closest members of my family.

All of this was made possible because five teams moved to Arizona and the Tigers had to find new opponents because of the Grapefruit League's decrease therefore, Detroit had to travel Southeast.

But because of circumstances, the Tigers were able to connect with their Gold Coast Fan Base.

Indeed, the Spring Training Landscape and Times have changed.

During the Tigers and Mets contest, Prince Fielder belted a long homer to right-field as the Mets fans cheered in the fourth inning. Fielder hitting home runs is something Tigers fans should see a lot. This homer run cleared a canopy.

The Mets fans were either happy it was in Spring Training or relieved that he's now in the American League and won't be a headache for them anymore in the Regular Season.

Scott Morganroth can be reached at scottsports33@aol.com and his blog can be seen at www.scottsports33.com.
- April 10, 2012