When I watched Larry Brown tell Mike Greenberg and Mike Golic on Mike and Mike In The Morning on ESPN a few weeks ago that he had the itch to coach, I never thought it would be at Southern Methodist University (SMU). 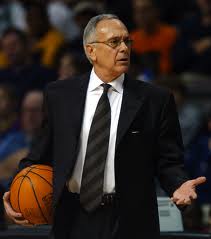 This move has some ironies for the 71-year old coach, who is the only person to win an NCAA and NBA Title.

Brown is following a North Carolina Tar Heel, Matt Doherty, who compiled an 80-109 record in six years with SMU.

It sounded obvious on Mike and Mike that Brown was determined to return to the sidelines after he parted ways with another North Carolina alumnus named Michael Jordan. Brown led the Bobcats to their only NBA Playoff appearance in 2009-2010 as Charlotte posted a 44-38 record.

Do the Bobcats miss Brown?

A few weeks ago, Charlotte finished with a 7-59 mark and now owns the worst winning percentage in NBA History at .106. The Bobcats concluded the 2011-2012 season with a franchise record 23-game losing streak. Jordan bombed badly letting Brown getting away while the Bobcats fans and City of Charlotte have a record the Philadelphia 76'ers were thrilled to give away.

The last time a Jordan coach returned to college was when Leonard Hamilton piloted the Washington Wizards in 2000-2001 to a 19-63 record. Months later, Hamilton landed employment with the Florida State Seminoles. He has compiled a 201-127 mark and has led the Seminoles to four NCAA Tournament appearances.

Now Carlisle has an NBA title for the Dallas Mavericks.

Is there enough room for Brown and Carlisle in Dallas?

I doubt you'll see these two exchange phone calls or ever eat dinner together. The only thing they'll share is air time on the local news.

There is no doubt that Brown will win at SMU. He's already getting rid of Doherty's players saying they're not good enough to play for him. He's already trying to find new schools for Doherty''s players.

It will be interesting to see Brown face Hamilton in "The Battle Of Jordan's Castoffs" perhaps in the NCAA, NIT or any Holiday Tournaments.

As for the Bobcats, the only thing they have to look forward to is the upcoming NBA Draft wondering if Jordan will ever get a pick correct since he bombed in Washington with Kwame Brown and in Charlotte with Adam Morrison.

As the NBA Playoffs reach their latter stages, all Jordan can do now is just remember what it was like in 2009-2010 and realize this is a distant memory. More importantly, for a man who has won six titles and is in the Hall of Fame as a player, the words Hall of Shame describe where he is as an Owner/Executive.

The Bobcats have a new arena, now they need a new result or putting fans in the stands will be like a pipe dream that gas prices will be $1.75 per-gallon.

Email ThisBlogThis!Share to TwitterShare to FacebookShare to Pinterest
Labels: Hall of Shame, Leonard Hamilton, Matt Doherty, Mike and Mike In The Morning, Motown