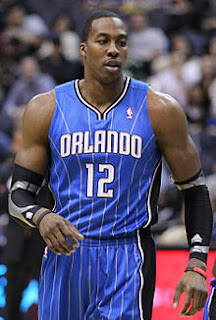 At long last, the Dwight Howard Soap Opera is over and it ended in Hollywood.

Superman otherwise known as Superclown has landed in the Entertainment Capital Of The World.

It took four teams, 12 players, five draft picks and countless rounds of talks with different clubs to get a deal done. The NBA may have prevented the Lakers from acquiring Chris Paul from the New Orleans Hornets since it owned the Louisiana franchise.

But the NBA did itself a favor by approving this deal. The league did all of us a favor so we didn't have to hear the endless hours of trade rumors.

Even if Superclown's future is uncertain in Los Angeles, the Lakers committed grand larceny by keeping Pau Gasol in Purple and Gold in Southern California.

The Lakers knew that to land Howard, they'd have to move future superstar Andrew Bynum, whom they've nurtured since he was 17-years old. Former Pistons Coach Doug Collins is the right person to instill discipline in the center.

Like Howard, Bynum becomes a free agent after next season and both have indicated they'll test the market.

However, I doubt Bynum will leave because he grew up an hour away in nearby New Jersey, therefore playing closer to home around friends and family is enticing enough to stay. He'll be able to get a maximum contract with the 76'ers.

The 76'ers have a good young team and are on the rise. They're a very stable organization.

To think that former Detroit Pistons Guard Arron Afflalo is the best player Orlando received in this transaction is mind boggling. But indeed this is the case.

Former 76'ers Guard Andre Iguodala will fit in nicely for the Denver Nuggets. The last player with the initials A.I. Philadelphia traded to Denver was Allen Iverson.

I'm sure the Nuggets have compassion for Orlando since former star Carmelo Anthony held them hostage and forced a trade to the New York Knicks for several players.

Denver made out fine landing pieces which led to the playoffs despite Anthony's departure.

It's ironic to see the Nuggets in another blockbuster trade involving a superstar.

What really happened in Orlando? Magic General Manager Rob Hennigan, 30, panicked and didn't get the best deal he could.

New Jersey offered a nice package around Center Brook Lopez and plenty of first round picks.

Instead, the Magic shipped Howard West because seeing him twice a season, once at home and once on the road was all the drama Orlando wanted to see in the regular season. Orlando wanted to avoid a duplication of the Lebron James fiasco where he could haunt them in the playoffs plus the negative story-lines four times a year.

Time will tell whether the hiring of a new coach will be the right decision. This is a tough situation for Jacque Vaughn to inherit. I wish him well.

But Van Gundy has a winning percentage of .641 and a 579-371 record. He took the Magic to an NBA Finals. That will be difficult to replace.

One thing is guaranteed, Kobe Bryant won't tolerate any controversy, waffling or drama about Howard's future! You can bet on that!

Bryant will rip Howard, 6-11, 265, apart to avoid such distractions. Despite being in Hollywood, this is one act that will draw rage, not ratings.

Howard, 26, will need hearing aides if his antics continue.

I expect to see Kobe Bryant as an NBA head coach one day. Despite the fact that many great players don't turn out to be excellent head coaches, he'll be the exception to the rule.

I saw him on the bench towards the end of the regular season in street clothes. Bryant was coaching his teammates in the huddle during timeouts as well as in the game. Bryant has a great work ethic and has been around basketball his entire life. He'll demand that from his players and will get that respect.

The Lakers have a veteran group that will pounce on Howard. Magic Johnson will also read Howard the "Riot Act" if Howard continues to become a distraction.

Howard's lucky he's in Los Angeles to rehabilitate his image. There are championships and legends and winning can stabilize a person's psych. We'll see if it does with this clown.

If Howard ever left for his hometown of Dallas, then I'll know the guy is Scrambled Eggs. But I don't think he's dumb enough to do this. Former Lakers Forward Lamar Odom crumbled when he was traded to the Dallas Mavericks. Odom is now with the Los Angeles Clippers.

The Lakers are the Bentley of NBA franchises.

They have appeared in the NBA Finals 31 times and have won 17 titles. The Lakers still hold the NBA's longest winning streak which is also the longest in American Professional Sports History at 33 games that was set in the 1971-72 season.

I don't think Howard will commit Reputational Suicide, but I've been wrong before, and I'll be wrong again.

Thankfully, I like many others, won't have to hear anymore trade rumors with Howard.

One of my colleagues at work said the Howard to Los Angeles trade wasn't fair. He's a big Miami Heat fan and deep down inside believes that the Heat's chances of repeating took a major blow.

If Miami were to beat the Lakers in the first meeting between LeBron James and Kobe Bryant, this will improve James and Company's legacy. If the Heat were to lose, then they will have lost to a great team and the TV Ratings would be off the charts. We'll find out in June of 2013.

The new collective bargaining agreement will limit future "Superstar Alliances" which began with the Boston Celtics, continued with the Miami Heat and has now happened again in Los Angeles.

Seeking multiple Olympians on a few teams and not in small markets will be a thing of the past.

I still haven't figured out which act was worse. Is it Howard's ongoing Soap Opera, or James TV Show "The Decision?"

But I guarantee you one thing.

There will be plenty of empty seats at the Amway Center in Orlando. The Magic has a long rebuilding process which is all too familiar when there is a Lakers---Magic connection.

The Original Superman Shaquille O' Neal left the Magic through free agency and won three titles with the Lakers and the Magic received no compensation.

With Howard's departure, they'll receive next to nothing.

The Amway Center is the building that Howard "Built" then "Bolted."

Howard knows that in 2 years, he'll be the main attraction in LA as Kobe and Nash will be retired. Howard is a great fit for Nash and the Lakers. The Magic had no desire for Brook Lopez, Kris Humphries, Bynum or Gasol. The NBA should NOT have approved this trade as the Magic did this so they would not have to spend money and also get rid of other big contracts they didn't want. A trade in the NBA needs to be fair and reasonable. This was not a trade. The Magic gained zero. Howard took the Magic to the Finals along with the most-hated coach by its players, Van Gundy. Like LeBron, who took the Cavs to the Finals, Howard didn't have any talent playing beside him as well. The Magic could have signed or traded for some great talent to play beside Howard, but they chose the opposite and got rid of future talent such as Ryan Anderson, last year's Most Improved Player recipient, Jason Richardson -- and yes, even Clark and Duhon, young guys who could help grow and build into fine players. Orlando now must market itself as the place to see your favorite team play on the road. Advertise in all states -- come to see your team play the Magic, and we will give you free tickets to Disney World. Forget selling season tickets. Now, Amway Center will be occupied by tourists. They lost an awesome rebounder and defensive player. Howard, unlike Bynum, always gave it his all, 100%. Bynum played when he felt like playing. If he felt like taking part in the time-out huddles, he did or did not. NBA fans should be disgusted by the uneven trade. However, OKC, should stay as quiet as they have been in response and show the Lakers that they may have the best starting 5 in the NBA, but they don't have the best team in the West. OKC is a team; they are younger, faster and more athletic. On paper, Nash, World Peace, Kobe, Gasol and Howard are an NBA dream team. The Magic will break the NBA record next season -- for most losses. The Lakers will be a better team than they were last year. They will be the most entertaining team. However, they will not be NBA Champions.