How do you explain the most recent college basketball coaching moves?

Hall of Fame College Basketball Analyst Dick Vitale's philosophy is go where you're happy? In some cases, that can mean stay put. What drives these coaches to not honor their contracts? When opportunity knocks, take that big job, get a substantial pay raise and be set financially for life.

Butler's Brad Stevens and Virginia Commonwealth's Shaka Smart have been pursued heavily in the past few years. But their universities have managed to find a way to give them raises and these two would prefer to build a legacy with their respective programs.

It's called being a "Big Fish in a Little Pond."

If they stay long enough and there will be a statue outside the arena or a floor named after them. 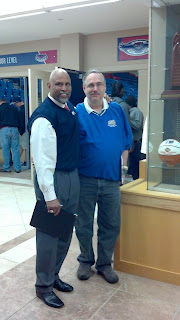 At FAU, the basketball program is stable under Coach Mike Jarvis. He falls into the category of "Been There and Done That." Jarvis' main stops were at George Washington University and St. Johns.

What helped FAU land and keep Jarvis is before he was hired, Mike was living in Boca Raton.

In fact, I met Jarvis at the Festival Flea Market in Pompano Beach, Florida. We exchanged phone numbers.

When Rex Walters departed for the University of San Francisco, although FAU had to go through the interview process, when it was all said and done, Jarvis became an easy choice.

His family lives here and he was able to hire his son as an assistant coach to groom him as a future head coach.

Former FAU Athletic Director Craig Angelos once told me that he'd probably have to negotiate higher buyouts to prevent his coaches from leaving in order to prevent instability in the program. But that never became the case when he hired Jarvis.

Now we're going to look at some of the most interesting coaching moves in college basketball's version of Silly Season.

1) It looked like the Minnesota Golden Gophers made a major mistake when they fired Tubby Smith after making the NCAA Tournament. Smith guided Minnesota to a 124-81 mark and three NCAA Tournaments. In the six previous years, Minnesota was 95-93 with no appearances.

But Smith wasn't out of work long as he was hired by Texas Tech. In the past six years, the Red Raiders were 69-104 with no NCAA Tournament bids. Prior to that under Bobby Knight, they were 138-92 with four NCAA Tournament Appearances.

But I give the Golden Gophers credit on Smith's replacement. They hired a young stud. 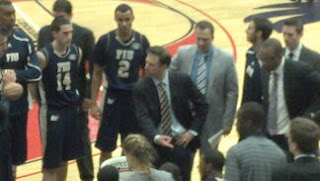 When I saw Richard Pitino (30) coach against FAU in March, this kid looked like his father Rick. He respectfully gets in his players faces, maintains their attention and FIU was exciting to watch.

In Richard Pitino's only season, he was 18-14 during his first head coaching job. He was one victory away from reaching the NCAA Tournament.

Richard learned his lessons well from his father, who was selected to the 2013 Hall of Fame and is the only coach to ever win an NCAA Championship with two different schools. Rick Pitino has seven Final Four Appearances and was a solid NBA head coach.

The Big Ten could be looking at a rising star, who will give Tom Izzo, Thad Matta, Bo Ryan and John Beilein future headaches.

2) Northwestern made a good young hire naming Chris Collins (39) as its new head coach. He brings energy and a good background to his home area.

Collins has served as an assistant for Duke Coach Mike Krzyzewski since 2000. His dad Doug has been an excellent player, coach and television analyst. Chris is a basketball lifer with a basketball in his hand since childhood, just like Richard Pitino.

3) USC hired Florida Gulf Coast Coach Andy Enfield to see if he can breathe life into a Football School.

Two NCAA Tournament wins turned into an incredible raise. Going from $146,000 to $1 Million would be a good reason to trade the Gulf or Mexico in Fort Myers, Florida, to the Pacific Ocean of Southern California. He wrecked 97 percent of the nations brackets.

Enfield was 41-27 in two seasons with Florida Gulf Coast. He built the program from scratch and in its second season made the NCAA Tournament.

That was good enough to impress USC Athletic Director Pat Haden, a Rhodes Scholar, that was a practicing attorney, who was a solid NFL QB with the Los Angeles Rams from 1976-81, and an excellent college football analyst.

4) UCLA wasn't happy with Ben Howland, so they went to New Mexico to find their next coach. Steve Alford was mentored by Knight.

He has been a winner at every stop.

For many years, there has been a pipeline from Albuquerque, NM to Los Angeles.

The Los Angeles Dodgers had a AAA affiliate named the Dukes from 1972-2000. Now the Isotopes are the newest AAA affiliate beginning in 2009-present.

Now Alford has a challenge to put an exciting brand of basketball on the floor at Pauley Pavillion in a much larger sports town. So many others have failed following icon John Wooden.

It will be a different situation since the Lobos owned the entertainment dollar in New Mexico having no problems filling "The Pit" versus the metropolis of Southern California.

Since USC made a splash with Enfield, UCLA had to answer back with Alford.

5) New Mexico promoted from within to fill their vacancy by hiring Alford's top assistant Craig Neal. The Lobos wanted to keep continuity and did a great job with Neal, who followed Alford to New Mexico from Iowa. Both led the Lobos to three NCAA Appearances and one NIT Tournament.

Neal, 49, has a vast amount of coaching experience, he's played professionally, and been an NBA scout. This opportunity is long overdue for Neal.

6) It looks as though Rutgers is on the verge of naming Los Angeles Lakers Assistant Coach Eddie Jordan to take over for the fired Mike Rice.

Jordan has NBA head coaching experience and played for Rutgers so Scarlet Knight fans will get one of their own to clean up the mess Rice left behind. Jordan also has to get Rutgers competitive as it joins the Big Ten in 2014.

The abuse with his players should get Rice blackballed from coaching. Rice A Roni isn't the Rutgers Treat and looks more like a New Jersey Devil.

I like the Jordan hiring. He can sit in a recruits home then tell the kid and his parents that he has the connections to fulfill the students dream of getting to the NBA. That's a powerful sales tool.

The Big Ten will be even more interesting to watch with these new coaches entering the conference competing against the old and established guard.

I really hope that Smith does well at Texas Tech where he'll be appreciated, bring integrity and stability to the Red Raiders program.

The Los Angeles Lakers and Clippers have their own city rivalry. Now UCLA and USC's coaches are dynamic hires and it will be interesting how their styles and personalities mesh trying to create their own version of "Showtime."

Scott Morganroth can be reached at scottsports33@aol.com. Photos by Candy Ebling.
- April 14, 2013