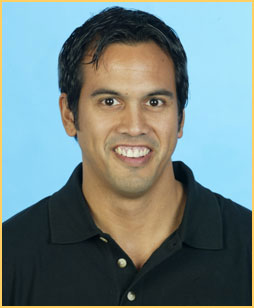 On Thursday Night, Miami closed out San Antonio 4-3 at the American Airlines Arena.

The 42-year old Spoelstra, a native of Evanston, Illinois., has won two straight titles as a head coach (2012-2013) plus another as an assistant under Pat Riley in 2006. Three titles in this time span is impressive.

He's never had a losing season in five years compiling a 260-134 mark with a .660 winning percentage in 394 regular season games.

The future has never looked brighter for him.

Meanwhile, Popovich, 64, is old enough to be Spoelstra's father. His Spurs were just seconds away from a fifth title in game six.

Popovich has only had one head coaching job that began with the Spurs in 1996.

Popovich's legacy is cemented and he's gone on record saying that when Tim Duncan retires, they'll leave the NBA together.

But what a great coaching match-up.

Now the Miami Heat has more titles than the Miami Dolphins overall, holding a 3-2 edge.

Spoelstra has more titles than the legendary South Florida icon and NFL Hall of Fame Coach Don Shula with three. They're tied at two as head coaches.

Shula won his first Super Bowl at the age of 43, on January 14, 1973 as his Dolphins won the first of back-to-back championships.

Ironically, Spoelstra and Shula have repeated as champions in their early 40's.

Shula's also from the Midwest. The 83-year-old was born in Grand River, Ohio.

It's amazing that Spoelstra has only been a head coach for only five years and has two titles at such a young age. He's two titles away from catching Popovich and has LeBron James and Dwyane  Wade leading the way.

To be mentioned in the same breath as Popovich and Shula is truly remarkable.

Riley must be amazed and proud that the way he's mentored and groomed Spoelstra.

His rival Phil Jackson must be taking notice because he's hoping that Brian Shaw becomes the next Spoelstra.

It looks like we're seeing a new trend with great coaches mentoring up and coming stars.

As for Spoelstra, he couldn't be in a better situation with an owner that will spend money to get the best talent in Florida, where there is no state income taxes.

Next up for Spoelstra, a contract extension.