When I think of the Miami Marlins, it was a totally different era.

The team's General Manager was my late friend Sonny Hirsch. The Marlins played at the now demolished Miami Stadium.

This building was within a couple miles from the historic Orange Bowl  and also used to hold concerts. The stadium held 13,000 and was demolished in 2001. The Miami Stadium Apartments now occupy this address.

The Baltimore Orioles called Miami Stadium their Spring Training Home from 1959-1990. Their Class A Florida State League (FSL) team the Miami Orioles produced young talent like Hall of Famer Cal Ripken among others from 1971-81.

The history of the Miami Marlins dates back to 1956-1960 when they played in the AAA International League.

From 1962-1970 they played in the FSL and after the Orioles departed the Marlins returned from 1982-1988. They were affiliated with the San Diego Padres and produced Benito Santiago in 1983 during their lone season affiliated.

Hirsch, who was a South Florida Sports Radio & TV Personality, loved baseball and once told me that in order for this area to land major league baseball that there had to be a team in Miami.

The Florida Marlins inaugural season was in 1993 and Hirsch was the official scorekeeper up until his death due to a heart attack at his Miami Lakes home on March 25, 1999. He was found by his longtime companion Betty Sands, and had no survivors. Hirsch was 65.

When I was covering the Fort Lauderdale Yankees from 1982-84, Hirsch and I used to talk baseball all the time.

My best memory of Sonny was back in 1983 when there was a double-header on a Sunday night which started at 6:30 p.m., and ended around 3:30 a.m. at Fort Lauderdale Stadium.

There were numerous rain delays and the umpires never called the game. But everyone in the press box never cared. When the food at the concession stand wasn't available, we found a place to order out. Sonny and I just talked baseball all night.

Hirsch has a street sign named after him and he was the voice of Miami Hurricanes Sports for 28 years. 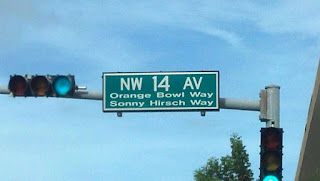 When I returned to see baseball on Tuesday, June 11, 2013 as the Marlins faced the Milwaukee Brewers, It was a totally different feeling. I have seen games in the past with the Florida Marlins at Joe Robbie Stadium.

The last time I saw a MIAMI MARLINS game was with Hirsch.

My last trip to the Orange Bowl was on November 24, 2007 as the Florida Atlantic Owls blasted the Florida International University Golden Panthers 55-23 to win the Don Shula Bowl.

It's constructed on 17-acres of the 42-acre Orange Bowl site with parking garages very convenient.

As for less congestion with the final football capacity, there is a difference of 34,877 less fans on game day. 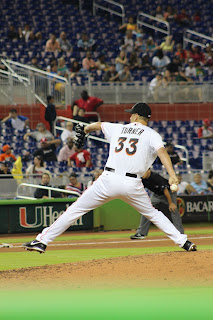 But it was a different feeling for me on this night. I've covered the Miami Dolphins and Hurricanes many times. To see a baseball diamond take the place of a gridiron took some getting used to.

This is a beautiful stadium and now the question remains will the area be able to support Major League Baseball?

During their history, the Marlins have won a pair of World Championships in 1997 and again in 2003. In both cases, the team got rid of its star players.

If only the Chicago Cubs could have such luck since they've been without a championship for 104 years.

The Detroit Tigers reaped the benefit of the Marlins salary dumps by landing Ivan Rodriguez, Anibal Sanchez, Omar Infante and Triple Crown Winner Miguel Cabrera. They also had to eat Dontrelle Willis' salary as part of a throw in to acquire Cabrera. Willis struggled with Detroit and was eventually shipped out of town. 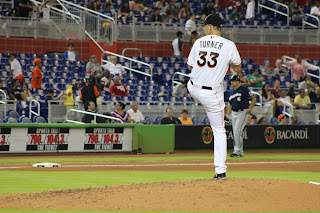 Detroit will get a chance to see Marlins Park for the first time during a season ending series from September 27-29. I'll be curious to see how many Detroit fans show up for this series. We'll see if Cabrera is on the verge of repeating as a Triple Crown Champion and whether the Tigers will win another division title in hopes of returning to the World Series.

Will Cabrera alone be able to draw more than 13,000 being a former Marlin with star power? We shall see.

But once again, this is a very nice ballpark!

I do wonder down the road if this building should have been built more centrally located towards Broward and Palm Beach Counties. Considering the fact that the Marlins got a sweet deal on the land and concessions deal,  I get that.

Also, anytime a historical sports site gets replaced by a new one, it does enhance an areas tradition connecting generations and past memories.

However, down the road, I still have doubts as to whether this team can keep the fans interest.

As I've seen over the years, in South Florida, if teams win, the fans will come out. The Miami Heat does pack their stadium downtown as they continue to be in the hunt for an NBA title.

But the fans in Miami are furious because a year ago Owner Jeffrey Loria spent lots of money to land veterans. He spent $108 million and has slashed the payroll down to nearly $35 million which is one of the lowest in MLB getting rid of its star players. 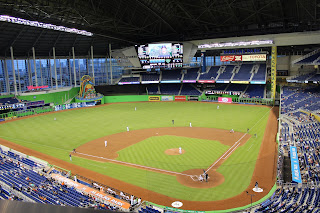 Now his 20-47 team looks like a squad of minor leaguers playing in front of paltry crowds. To date, the Marlins have used 14 rookies.

Yet, in Miami, it's still baseball and Hirsch would be proud to see a major league team in a stadium where he had many memorable sports moments.

Baseball is alive in Miami, but is it well?

Now the question remains, will the Marlins be able to do what the Dolphins and Hurricanes did and that's win championships at this historic location.

The Hurricanes have five National Championships while the Dolphins own a pair including the only undefeated season in NFL history.

When will No. 8 come? Stay tuned, but rest in peace Sonny because you're the Real Reason Baseball is back in Miami.

Because of your hard work decades ago, Your Dream Came True.

Scott Morganroth can be reached at scottsports33@aol.com.
Photos By Candice Ebling.