The last time the FAU Owls opened the season at home against Middle Tennessee was a day that Michigan Wolverines Football fans certainly would like to forget. 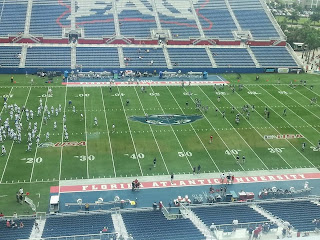 Six years later, the Owls have opened at home again against Middle Tennessee, but two major things have changed.

Three years ago, FAU moved into it's beautiful on campus stadium that faces the Atlantic Ocean. You can see the ocean from the Sixth Floor at FAU Stadium in the Press Box. 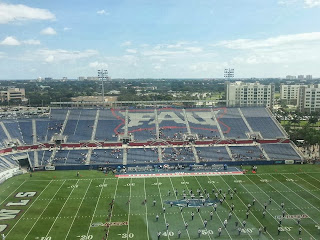 Four teams made the switch to Conference USA. Florida International University and North Texas were the first to make their announcements. Months later, FAU and Middle Tennessee followed them.

For the last few years we've seen a lot of conference realignment. Schools like Colorado, Utah, Texas A&M, Missouri, Syracuse, Pittsburgh, Nebraska, West Virginia and TCU are acclimating to their new rivals. The Big Ten will add Maryland and Rutgers next season while Louisville is headed to the ACC.

How have the Owls adapted thus far?

After FAU's 42-35 overtime loss to Middle Tennessee, the Owls are 1-3 and 0-2 in the conference. The Owls have now lost six in a row to the Blue Raiders and trail the all-time series 8-3.

FAU's only victory occurred September 14, as the Owls defeated My Alma-Mater the University of South Florida Bulls 28-10 in Tampa.

It's hard to win committing five turnovers as FAU did, in addition to allowing Middle Tennessee to amass 446 yards in total offense.

It's rare to see a team compile 503 yards in total offense and lose. But that's what happened to FAU.

Wide Receiver, Daniel McKinney, a senior from Detroit was FAU's leading receiver. He had nine receptions for 82-yards and a touchdown. This was a career high for McKinney.

When the game was over, FAU Coach Carl Pelini said despite the close loss, he's said there is no such thing as a moral victory.

"You're not going to beat a good football team like Middle Tennessee when you constantly shoot yourself in the foot," Pelini said. "I don't think we were very disciplined on the defensive side of the ball, and I think we made a lot of mistakes on the offensive side of the ball. You can't have five turnovers in college football and expect to win games. It shouldn't have come down to overtime."

Pertaining to the turnovers, Pelini added, "they're tearing at the football. You know you saw it, and we just got to be stronger. We practice ball security everyday, so it's unacceptable."

FAU returns to action on Saturday, September 28 at 7 pm as it hits the road to play in the first "Owls Bowl" visiting Rice in Houston, Texas.

There is one thing FAU didn't have to deal with that two other Florida schools had to face Saturday.

The Florida A&M Rattlers were ripped by the Ohio State Buckeyes 76-0 in Columbus.

FAU's rival Florida International University went to Kentucky and was crushed by Louisville 72-0.

After today's offensive display, I'll be curious as to see what's ahead in the coming weeks for FAU. I find it hard to watch a team score 35 points and lose.