As I went to the sixth floor of the FAU Press Box, I ran into Owls Athletic Director Patrick Chun and we talked briefly about the switch to Conference USA.

Chun was pleased to make the move because FAU was hosting a new conference opponent. More importantly, he knew that by upgrading to a higher level conference, it would also draw larger crowds. It also enabled FAU to keep its rivalry with FIU intact.

This was definitely the case Saturday Evening as 19,760 showed up to see FAU's second conference opponent. The attendance was the second largest in the history of FAU Stadium. 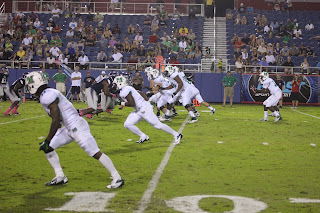 The Marshall Thundering Herd has produced a lot of NFL Players. The three alumni which come to mind include QB's Chad Pennington, Byron Leftwich and Wide Receiver Randy Moss. Each of these players appear heavily in the Marshall record book.

Moss should be inducted into the Pro Football Hall Of Fame when he becomes eligible in five years.

These two schools have other things in common.

Marshall has appeared in five bowl games in Detroit. The Thundering Herd are 3-1 in the Motor City Bowl and 1-0 in the Little Ceasars Bowl. Marshall's record is 4-1 in Southeastern Michigan.

FAU won it's lone appearance in the Motor City Bowl in 2008 defeating Central Michigan and is 2-0 all-time in bowl games.

Going into the 2013 season, FAU is 58-74 participating in the Sun Belt Conference playing for their only two coaches Howard Schnellenberger and now Carl Pelini.

FAU began playing football in 2001 and the Owls winning percentage is .439.

To date, FAU's best players include Tennessee Titans QB Rusty Smith, the first Owl ever selected in the NFL Draft and Washington Redskins star Running Back Alfred Morris, who ran for 1,613 yards in his rookie season of 2012.

There is one thing these programs Fortunately Don't have in common.

On November 14, 1970 the Thundering Herd was devastated by a tragedy that eventually became a movie in 2006 called "We Are Marshall" which centered around the crash and rebirth of the program.

A total of 75 passengers, including 37 members of the football team were killed in a plane crash.

It took a full decade to recover from the crash and Marshall was the worst football program in the 1970's.

The Thundering Herd didn't have a winning season until 1984.

If there is an interesting thing to watch with these mid-major schools is they do produce their fair share of players and many of them are the ones selected in the second and third days of the draft otherwise known as the "Hidden Gems" that win Super Bowls.

As for their first meeting, FAU held a 23-14 lead with 8:07 left in the fourth quarter, but the Thundering Herd came back to win 24-23 as Justin Haig connected on a 41-yard field goal as time expired. 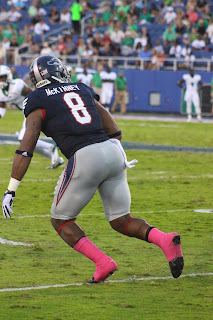 The victory improved Marshall's record to 4-2, 2-0 while FAU dropped to 2-5, 1-4, in the Conference USA Eastern Division.

This was the second heartbreaking loss this season at home for FAU and that aggravated Owls Coach Pelini. 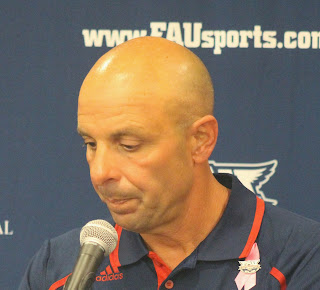 FAU has a bye next week and don't expect Pelini to pat anyone on the back as the Owls travel to meet the Auburn Tigers on October 26 in Alabama. The only thing guaranteed is a large payday to deposit into the Athletic Department's bank account.

Up next for FAU at home is a visit from the Tulane Green Wave. I'll be curious to see the turnout on November 2, 2013.