On Wednesday, Holland proved why he deserved to be on this list by acquiring Center David Legwand from the Nashville Predators in the final minutes of the NHL's trade deadline. It was a move designed to bolster a position which has been decimated by injuries. It showed the city and his team that he wants to maintain the winning tradition. No fire sales and selling, just buying. 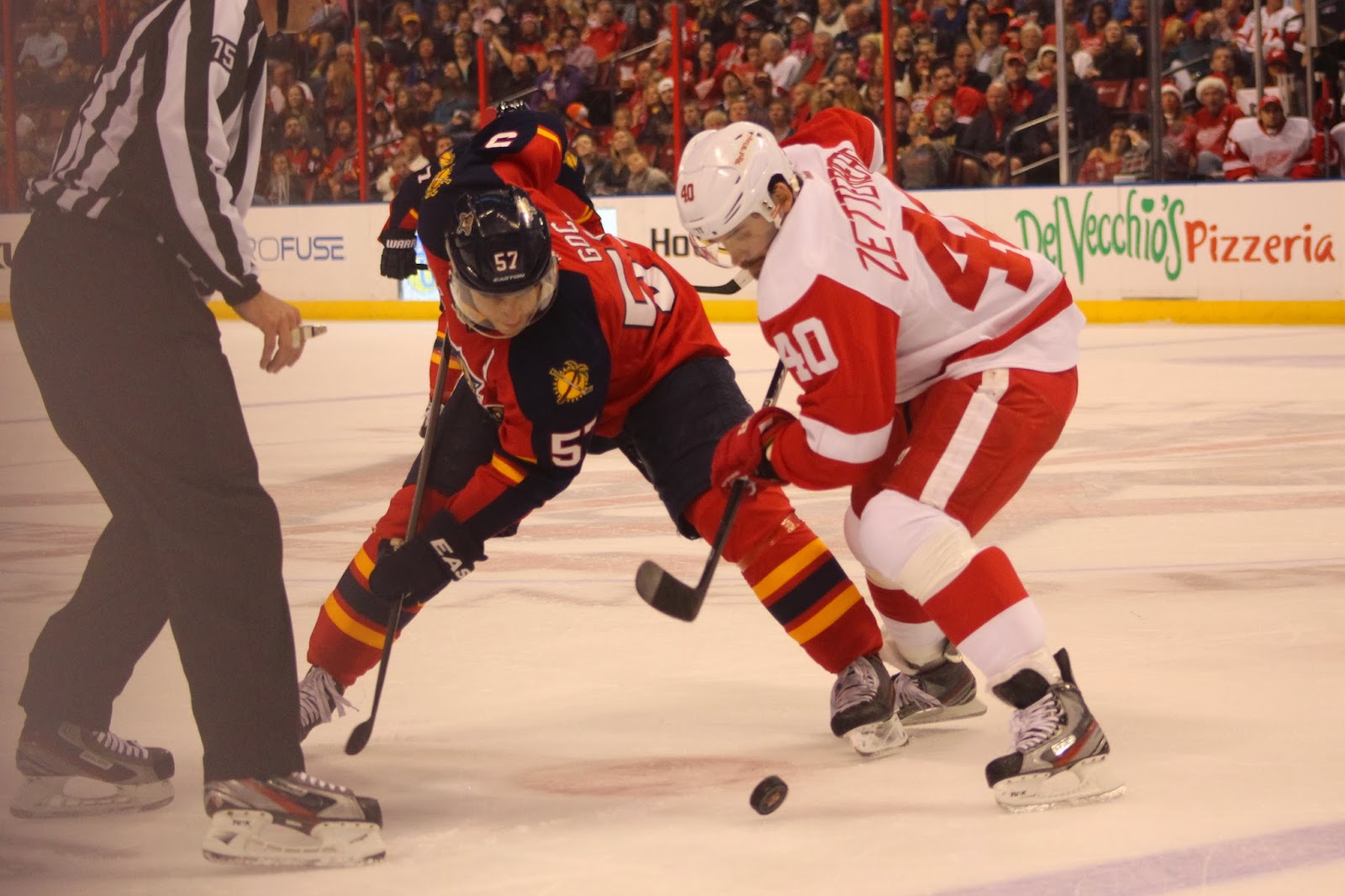 Before the Olympic Break, I had the opportunity to speak with Holland in this Q & A Interview about some of the latest developments with the Red Wings when Detroit played the Florida Panthers at the BB&T Center.

Q: Are you relieved that the Red Wings will be taking future face offs in a new stadium?

A: Yes. It's a big step. It's really important because it allows our organization, franchise and city to remain competitive in the NHL.

Q: What do you think the new facility should look like?

Hopefully, we can take the best of all the buildings. I know they've asked other buildings if you could do things differently, what would you do? A state-of-the-art stadium would be fantastic not only again for our team and city, but it will really help in the re-vitalization of Downtown Detroit. 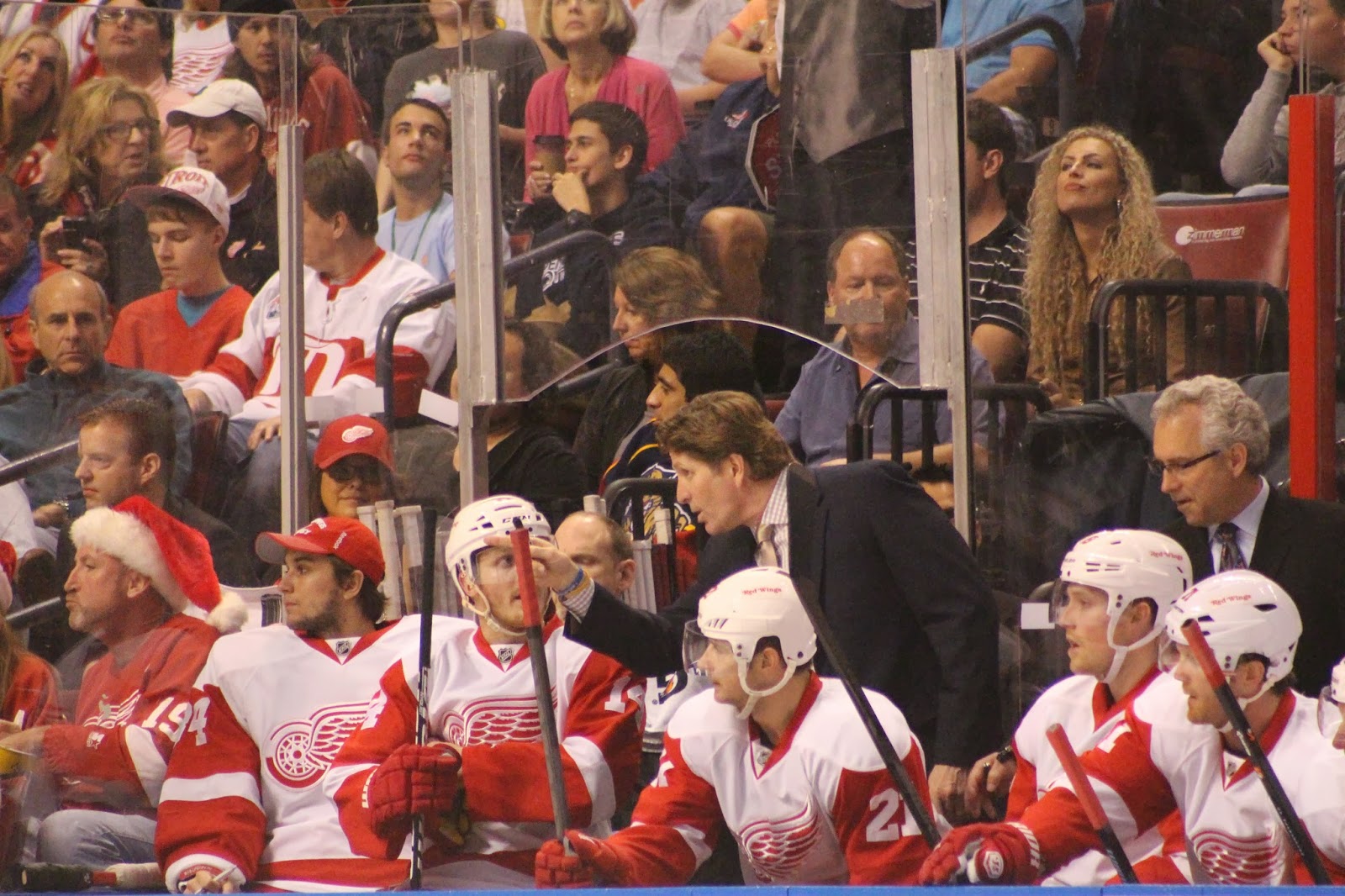 Q: Ken, I'm an old school guy, have you heard anything about Olympia being used in the name of the new arena? Olympia Stadium would sound great!

A: I haven't gotten involved in the conversations. I will say this. The history of the Red Wings is very important to our ownership. We're one of the few franchises that we don't have a third jersey. We've done very little tinkering with our jersey.

When the Ilitches bought the team in the early 1980's, they wanted to have the history and respect it. So I'm sure those things will be discussed and talked about. The history of our team will be up front first and foremost.

A: I don't really know. At the end of the day, you can name some rooms and other parts of the building different things. In this day and age there is naming rights. I don't know if they're looking at naming rights.

My thing is to keep the Red Wings competitive on the ice. We do go to regular meetings. They've asked our input in the designing of the locker room. We want a state-of-the-art locker room as we go on the road and see other locker rooms.

They ask us what I like about different rinks in the NHL. It's not my job on a day to day basis.

Will Olympia be in the name? I really have no idea.

Q: Since I live in South Florida, the Miami Marlins recently built a new stadium on the site of the historical Orange Bowl. Did you ever hear if the old Tiger Stadium site was ever considered?

A: I don't know. I'm sure the planning started 4,5,6,7 years ago. I'm not sure what was ever considered. Someone did there work that made the current location the best sense. I'm sure there were a lot of great areas and opportunities. You have to buy land, the city made a major move by doing some re-zoning, had to put parcels of land that they owned with the development package. I'm not sure what was ever considered. 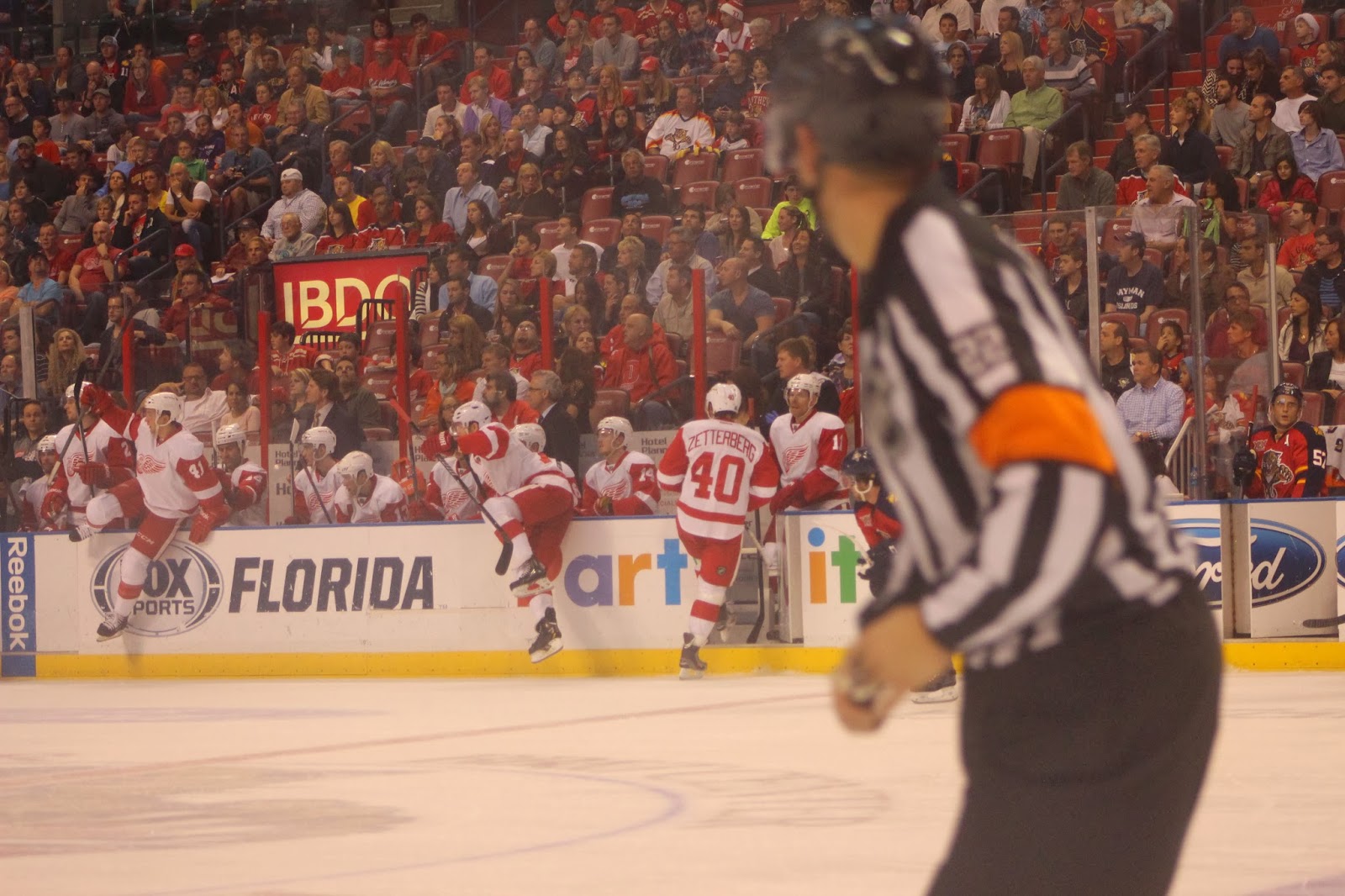 I moved to Detroit in 1994, and what's good about this is we can start by bringing energy and different businesses. The city can go from there.

It's important to have a Downtown District in every city in the USA and Canada for that matter.

Detroit is on the way back. It takes time to kind of lose your sex appeal and it takes awhile to build back your sex appeal. The people of Michigan and Detroit are going through the process to get Detroit back to what it is. It's one of the great cities in America.

Q: Now we can move on to some easier hockey questions and we'll start with the Red Wings move to the Eastern Conference. Some thoughts?

A: It's going to be fantastic for us. It's going to take time. Other than Toronto, Montreal, and the other "Original Six" teams, (Boston and NY Rangers) to go along with the Pittsburgh Penguins, whom we played in the finals twice in 2008 and 2009; the other teams we played once a year and in some years we didn't play them.

Even though Anaheim is on the West Coast, we had a good relationship/rivalry with them because of the playoff match-ups through the years. I think it's going to be awesome with us being in the Eastern Conference. It's going to take 2-4 years to build up relationships and rivalries with some of these cities beyond the "Original Six."

Q: Now that you're not switching time zones as much, would you say that the team will benefit with more practices with less travel wear and tear?

A: I don't know that the 82-game regular season in the Western Conference was that bad. We have our own private airplane. The schedule makers did work with us.

As we go forward, and we're able to make the playoffs, there will be less wear and tear in the Eastern Conference. We'll build up more rivalries, plus there will be more road games in prime-time on TV for our fans in Detroit. Fans love rivalries. We have Toronto and Montreal that go back in the beginning of time.

Hopefully, over the next 10-15 years, we'll have playoff series with Tampa Bay, Florida, Washington, and another with Pittsburgh. The more playoff series you're in with both cities, there is a build-up of emotional energy for that team which is good going forward.

Q: Would you say that the early returns to the Eastern Conference are good? 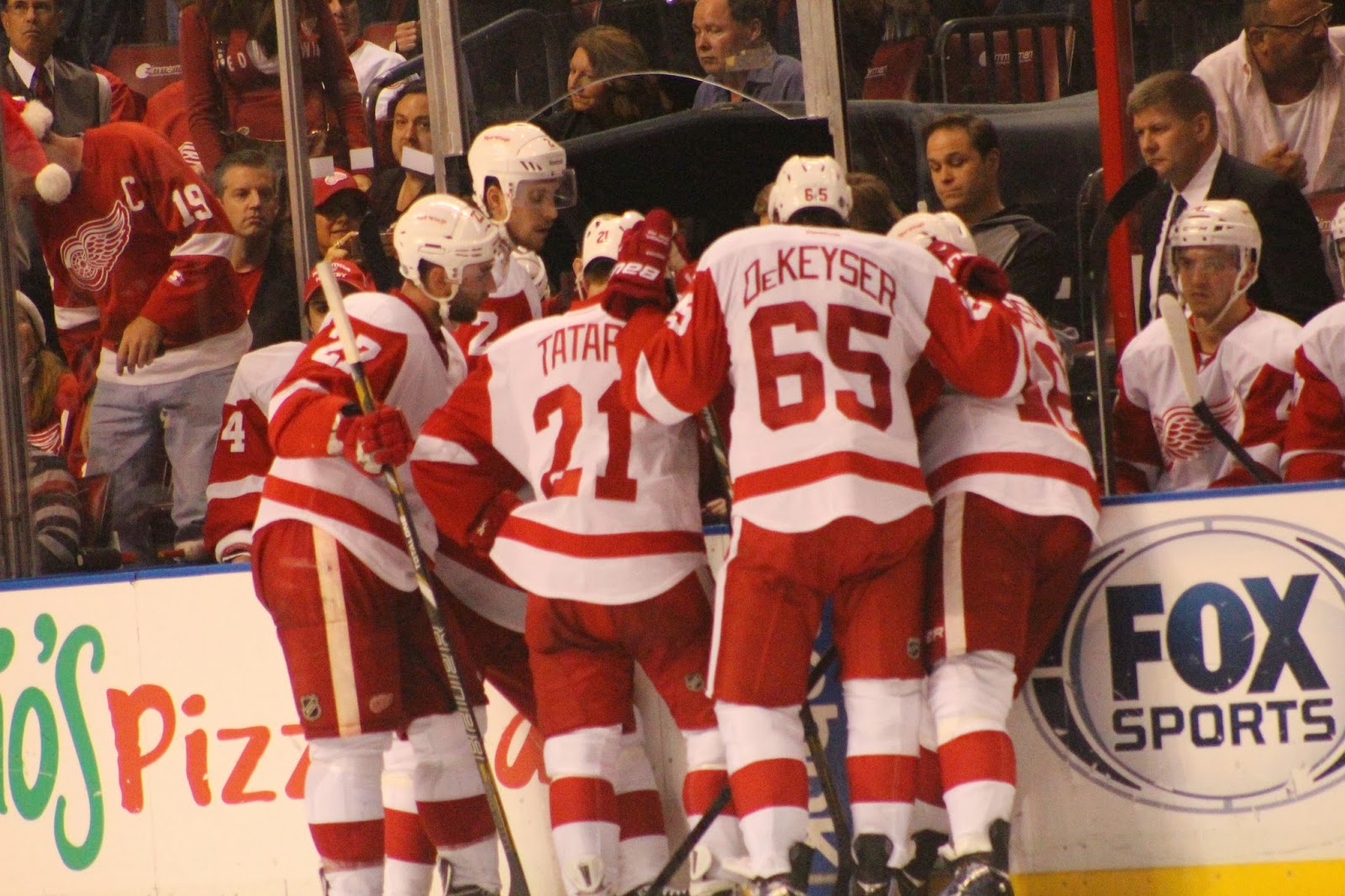 Q: Let's talk about your Coach Mike Babcock. With a 22-year playoff streak on the line trying to reach 23, is this one of his best coaching jobs?

A: He did a tremendous job last year with a lot of people out. He kept us afloat structure.

This year, he's played a lot of kids. This has been a great year for our team because we're set-up going forward. If we didn't have the injuries, we wouldn't know about Riley Sheahan, Tomas Tatar, Gustav Nyquist, and Tomas Jurco.

They've had opportunities. We count on these guys night after night after night. Hopefully, our organization will be much deeper in March than we were in November. When we head into the off-season, we have to make a decision about our team. We've watched these kids play.

We played in Vancouver and Sheahan went head-to-head against Ryan Kesler a world class player. You normally don't get that opportunity to watch these players play in those situations.

But this year, we have. 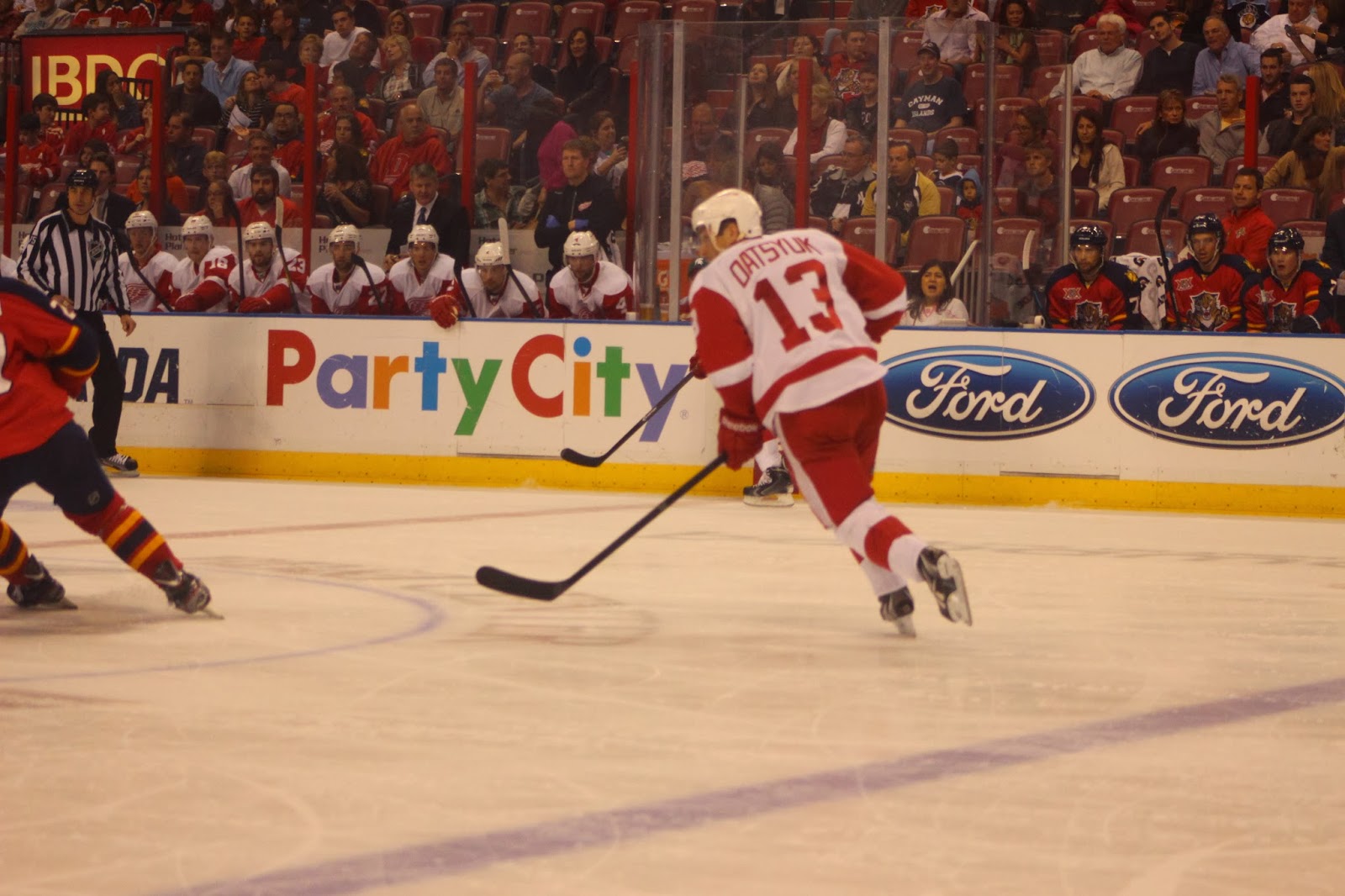 Another "Original Six" match-up with both teams driving to make the playoffs in The Big Apple.

Despite the fact that Henrik Zetterberg and Pavel Datsyuk will be out for an extended period of time, this team will only get scarier in the playoffs upon their return.

The only curiosities that I have at the moment are the progression of these kids and how much Legwand contributes. But being a hometown player despite Legwand's pending free agency, I couldn't imagine Holland making a trade for a rental especially for a guy that waived his no-trade clause to come home.

As much as I used to enjoy watching Lions Hall of Fame Running Back Barry Sanders march to the top of the all-time rushing chart, I am looking forward to seeing how many teams the Red Wings pass if they're able to get a a red hot streak.

We've all heard the phrase being "Thrown into the Fire," these kids are definitely getting "On the Job Training" at the highest level in the NHL and the rest of the teams know it.