Every successful coach in any sport deserves to maximize his income potential.

Therefore, I understood why former Red Wings Coach Mike Babcock took his intense personality across the border and accepted the challenge to rebuild the Toronto Maple Leafs.

It's pretty hard to turn down an eight year contract for $50 Million.

Can't blame a man for more than doubling his salary with another "Original Six Team."

Will money buy Babcock happiness? He's taking over a franchise which hasn't won a Stanley Cup since 1967 when there were only six teams in the NHL.

Former NHL Coach and current Hockey Night In Canada Analyst Don Cherry advised Babcock to stay in Detroit. Cherry had been through this before.

But Babcock decided to undertake this rebuilding process in his home country Canada. This week Toronto traded away its franchise player Phil Kessel to the Pittsburgh Penguins. 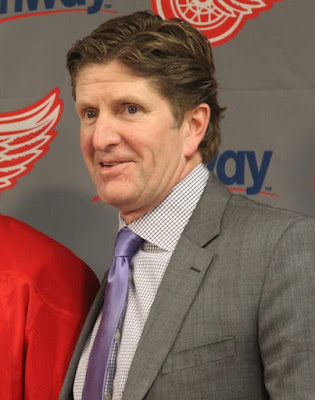 I do wish Babcock, 52, well except when he faces Detroit. My dealings with Babcock have been pleasant through the years. I look forward to seeing him when he visits the Florida Panthers in Sunrise.

Bobcock's regular season mark with Detroit was 458-223-105 for a .649 winning percentage. He made the playoffs in all 10 seasons with the Red Wings and won a Stanley Cup in 2007-2008. He reached the Stanley Cup Finals the following season. Detroit has made the playoffs 24-consecutive seasons.

I know this was a gut wrenching decision for Babcock to leave Detroit, but to his credit, it was classy that he had a Farewell Press Conference with the Detroit Media and left a Class Act.

The day before his Final Press Conference with the Detroit Media, Babcock called Toronto, "Canada's Team." Toronto is the wealthiest franchise in Canada.

I hope for Babcock's sake that the organization, run by former Red Wing Brendan Shanahan, gives him enough time and provides him the players to be successful. Otherwise, it will be a long eight years for a guy that hates losing.

The best example of this is former New York Yankees Manager Casey Stengel. In 12 years with the Yankees, Stengel was 1149-696 and won seven World Series titles for the Bronx Bombers.

We'll see how much this wears on Babcock and see his his red hair turns grey. The guy is only four months younger than myself, having been born on April 29, 1963, and is eligible for AARP.

Red Wings GM Ken Holland is not only the smartest person an organization can have, but the most loyal. He's already made a couple solid moves in free agency.

When Babcock departed, Holland knew his successor was a two hour drive on I-96 in Grand Rapids.

Ken obviously felt Jeff Blashill could transition well to Detroit, otherwise he wouldn't have torn up his old contract then doubled so Blashill wouldn't talk to other teams.

In six seasons as a head coach, Blashill has never had a losing record. He won a Calder Cup with the Grand Rapids Griffins 2012-2013.

He's shown loyalty to Holland and deserves this opportunity. Plus, he's worked and developed many of the current Red Wings. Needless to say it should be a seamless transition.

It was interesting that as I watched Holland's press conference of Blashill's hiring that Ken indicated this was the worst kept secret.

We'll see if this leads Detroit to the post-season for a 25th straight year.

But the Buffalo Sabres, who made an aggressive attempt to hire Babcock, snapped up Bylsma, thus there were no other candidates that made sense to me.

There seems to be a New Trend in hiring a head coach in the NHL that I've noticed.

Instead of hiring recycled-experienced coaches, teams are starting to give younger coaches an opportunity.

The Tampa Bay Lightning hit a home run with Jon Cooper. The 47-year old Prince George, BC, CA native has compiled a 101-59-20 mark in three seasons. Cooper defeated three "Original Six Teams" to reach the Stanley Cup Finals, only to fall to the Chicago Blackhawks. 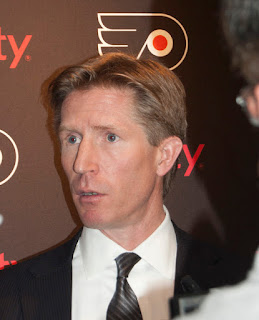 Prior to coming to the Lightning, Cooper won championships with the St. Louis Bandits, Green Bay Gamblers and won a 2011-2012 Calder Cup for Tampa's AHL affiliate, the Norfolk Admirals.

The Philadelphia Flyers went to college and found their new coach, Dave Hakstol, 46, from the University of North Dakota. In 11 seasons with North Dakota, Hakstol was 289-141-43 and his team reached the Frozen Four seven times. Hakstol is photographed.

Hakstol is the first head coach to go directly from the NCAA to the NHL since 1982 (Bob Johnson from the University of Wisconsin to the Calgary Flames).

Hynes is the youngest coach in the NHL.

Prior to joining the Devils, Hynes coached for the Pittsburgh Penguins AHL affiliate the Wilkes-Barre/Scranton Penguins for the past five seasons, making the playoffs each year. He reached the conference finals twice.

Scott Morganroth can be reached at www.scottsports33.com and is a long-time member of The Detroit Sports Broadcasters Association.
- July 03, 2015