If there is ever a person that I view as a Baseball Lifer, it's former Daytona Tortugas Pitching Coach Tony Fossas.

Fossas, 57, from Havana, Cuba is a fellow USF Alumnus. I met Tony in 2005 when he was the pitching coach for the Florida Atlantic Owls. He worked for retired Manager Kevin Cooney.

It was neat seeing him again on August 29, 2015 the day after the Detroit Lions faced the Jacksonville Jaguars in North Florida. Daytona faced the Tampa Yankees on Saturday Night at Jackie Robinson Ballpark.

After his playing career, Fossas moved into coaching. It was great talking to him about his post FAU job, plus he had many other interesting insights in this exclusive interview.

Q: Tony, what have you done since leaving FAU? 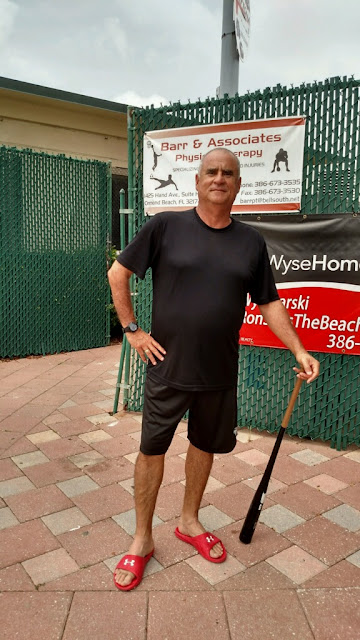 A: I've been coaching with Cincinnati the past seven years. I've done Extended Spring Training, have coached for the Reds Minor League clubs in Billings, MT., Ohio and in Daytona Beach. So this is a really good job place for me because I live in Fort Lauderdale. This is close to home.

Q: You talk about being at the professional level. Have you thought about going into the higher classifications such as Double AA and Triple AAA, or do you prefer the younger players in Class A?

A: I just like working in baseball. Double AA, Triple AAA and the Major Leagues is the same. The organization tries to put you in the best place you fit to help the organization. So I don't have any problems being here.

I just enjoy what I'm doing and being in the game. The part of the game isn't just where I'm at, or who I'm with. I just love the game of baseball!

Q: At our Alma-Mater USF, you had the opportunity to play for Hall of Famer Robin Roberts. What was that experience like?

A: I played my last three years for Robin. He was a Father Figure to me, and cared a great deal about me. He was a guy in my young-hood, who developed me as the pitcher I was. It was a great situation for me all the way around.

Q: What lessons from Roberts have you conveyed to your pitchers?

A: The same thing Roberts taught me, I heard from Ferguson Jenkins. When I was with the Cardinals, I heard the same message from Bob Gibson, so I figured out nothing can go wrong if I repeat the same message to my players.

Q: Last year, I had the opportunity to interview former Detroit Tigers Pitcher Joe Coleman when he was with the Jupiter Hammerheads. I'm going to ask you the same question that I asked Joe since you're both pitching coaches. Why are we seeing so many Tommy John Operations?

A: I don't really know. I do know that guys are bigger and stronger than they have been. Some players are throwing the ball harder than ever.

But if I can say a couple things about it, but I'm not an expert at it, I would say when I was younger, I played football, hockey, street hockey, basketball and some baseball. It wasn't like me playing baseball on a year-round basis. Nowadays, the parents are so infatuated from getting the kids their scholarships. Therefore, their kids play baseball at 10 years old all-year round. The kids body isn't fully developed enough to do that.

So that's one of the attributes that's in the best interests of the player is to play multiple sports, and let their arm rest, and not be full-time in one sport.

Q: What are your thoughts about pitch counts being more emphasized these days?

A: Again, I'm not involved in the science of the game, but in the older days, there was no pitch count. I don't have a thought one way or the other. We try to obey orders. When people tell you what to do, there is a protocol to follow, you do it.

The science is a lot greater than it was, and there is a lot more knowledgeable people in that area than I am. It really doesn't matter. If you don't have a really good bullpen, it doesn't matter if the starter goes six innings. The key is to have a really strong bullpen at whatever level you're in to win games.

Q: Working in Daytona Beach, many of these ballparks are past and current spring training sites. Are the Major League dimensions a good way to judge the development of younger players in the Florida State League? Does a major league ballpark help in the way you judge pitchers?

Q: Finally, let's talk about what it's like to work for the Cincinnati Reds organization. When I was covering the Tampa Tarpons from 1984-1986, Cincinnati had one of the best farm systems in baseball. What are your thoughts about the Reds farm system?

Scott Morganroth can be reached at www.scottsports33.com and is a member of the Detroit Sports Broadcasters Association.
- October 19, 2015