On December 28, 2014, We covered the Detroit Lions vs Green Bay Packers at Historic Lambeau Field with the NFC North Division Title on the line. The Green Bay Packers emerged as 30-20 winners and won the Norris Division.

What stood out in this game was former Lion Ndamukong Suh stepping on Packers QB Aaron Rogers leg which almost cost him an opportunity to play in the wild card game on the road against the Dallas Cowboys. 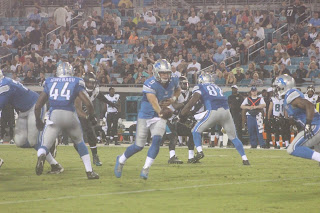 Suh has since signed with the Miami Dolphins and will now have an opportunity to collect fines against  Patriots QB Tom Brady. A new challenge and a new conference for Suh.

But life goes on in the NFL where rosters change drastically and big name players find new addresses.

The head coaching turn over every year leads to more intrigue as to what teams will make dramatic improvements to reach the playoffs.

It's also worth mentioning that some previous years playoff teams regress, thus find themselves out of the Playoff Tournament. 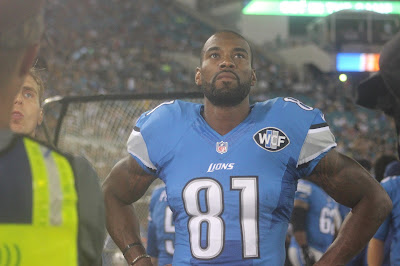 The last time I covered a Lions pre-season game was back in the late 1990's at the Pontiac Silverdome.

There was a much different atmosphere at EverBank Field on Friday, August 28, 2015. It was a rainy and wet night in Northern Florida.

There was no division title on the line. Just jobs.

On this night, the Lions had a 75 man roster.

They didn't use Suh's replacement Haloti Ngata so other than what I've heard throughout the off-season, it will be interesting if he'll be a big impact on the Lions defense.

Three offensive players from last season never made it to today's opener in San Diego against the Chargers.

Tight-end Joseph Fauria was released and is now a member of the Arizona Cardinals.

QB Kellen Moore is now on the Dallas Cowboys practice squad. I have a gut feeling that Moore will land a starting job within a year or two.

Wide-receiver Ryan Broyles was released, and as of today is still an unsigned free agent.

Aside from the addition of Ngata, I will be curious as to how much of an impact two new draft choices make.

We all know that rookie running back Ameer Abdulla was an exceptional player at Nebraska. He'll be wearing jersey No. 21. 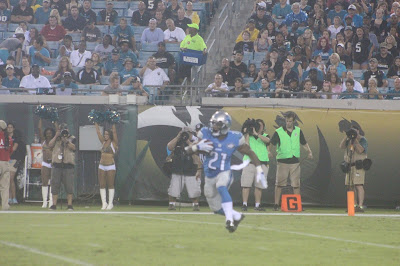 Here is an interesting comparison between Lions Hall of Famer Barry Sanders and Abdullah.

Although Nebraska is currently a Big 10 School, it used to be a member of the Big 12.

Abdulah is 5-9, 203 pounds and like Sanders runs low to the ground. If he's used as an outside receiver, then he's even more dangerous in space.

While it's unfair to compare a rookie to a Hall of Fame player, both wearing No. 21 in College, both having Big 12 ties and similar physical characteristics, it's worth noting.

The Lions had good luck with another former Big 12 running back. Have you ever heard of Billy Sims? He played for the Oklahoma Sooners.

If injuries hadn't cut Sims' career short, who knows how much more success Billy would have had with the Lions.

But when you have good luck drafting with these Big 12 Schools, there is nothing wrong with adding more players from these institutions: especially, when it comes to running backs.

The other draft choice in this year's class who intrigues me is defensive tackle Gabe Wright.

This kid is from Auburn and is 6-3 and 305 pounds. He was selected in the fourth round.

During the off-season, the Lions didn't re-sign Nick Fairley, who was also from Auburn. Fairley is 6-4, 308 pounds. He was the Lions first round pick in the 2011 draft. Fairley is currently with the St. Louis Rams.

Will Fairley's departure haunt the Lions or will Wright be a hidden gem for Detroit? I will be curious to see how these story lines play out this season.

It's time to see if tight-end Eric Ebron's sophomore season will be much better than his rookie campaign. There is no question he has the potential, now the question is will he be productive on the field?

If the Lions can avoid the Tigers injury problems this season, then I'll be curious to see if they can return to the playoffs. 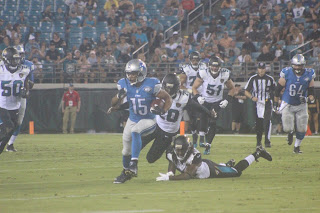 The four offensive players that will be key are QB Matthew Stafford plus wide receivers Calvin Johnson, Golden Tate and running back Joique Bell.

What type of contribution will running back Zach Zenner have?

Zenner is 5-11, 222 pounds and played college ball for South Dakota State. He had an impressive pre-season.

As I've watched many football experts predict playoff teams, the Lions have been absent from many of these lists.

I've always relished the underdog role because it gives you a chance to prove your critics wrong. This is Detroit's chance to do so.

The Lions will have plenty of National TV Appearances. Are they going to be contenders or pre-tenders?

How good will Ngata be or how much will the loss of Suh have an impact on one of the top defenses in 2014? 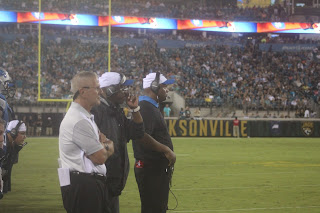 As much as I would have liked to see Suh stay because he gave the Lions an incredible ferocious defensive identity, his contract could be a tough one for the Miami Dolphins to swallow if they don't reach the playoffs immediately. This is a must win season for Miami.

After the game, Detroit Coach Jim Caldwell was pleased with Stafford's play throughout the pre-season.

"He has had a good pre-season," Caldwell said. "He has done a nice job on his completion percentage. He moved the ball."

What are Stafford's thoughts about what he expects from the offense in 2015? 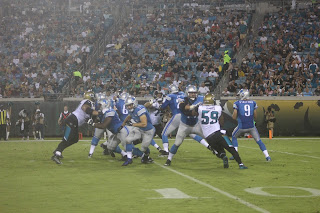 "I am pleased with it, "he said. "As an offense, we're playing with good tempo. If we stay out of our own way, we'll be a pretty good football team."

How good of a football team will the Lions be?

If the Lions make the playoffs, I think they'll do it with a 9-7 record.

The main goal is get into the tournament.

The 2011 New York Giants won the Super Bowl with a 9-7 record against the New England Patriots, who were 13-3. The Giants are the only 9-7 team to win the Vince Lombardi Trophy.

There have been other 10 win teams that won the Super Bowl.

As for My Super Bowl Prediction, look for a rematch of last year's Super Bowl.

But this time, the Seattle Seahawks will defeat the New England Patriots. The Seahawks were one play away from repeating.

Running back Marshawn Lynch emerges as the MVP in Super Bowl 50.

Seattle Coach Pete Carroll gets vindicated after last year's heart-breaking 28-24 loss which costed his team a chance at a repeat.

Scott Morganroth can be reached at www.scottsports33.com. He is a member of the Detroit Sports Broadcasters Association.
- September 13, 2015