Whether the Detroit Lions win or lose when they're on National Television, they generally make things very exciting.

It remains to be seen if they'll get any National TV Appearances in 2016 beyond their annual Thanksgiving Game.

In last years playoffs on the road against the Dallas Cowboys, while the Lions were leading 20-17 in the fourth quarter, a pass interference call that gave Detroit a first down well into Dallas territory was picked up without explanation by referee Pete Morelli.

That turned into a huge benefit for the Cowboys, as the Lions shanked a punt on the next play and the Cowboys took advantage of their good field position to march down the field and score the go-ahead touchdown to take a 24-20 lead.

In week four of the 2015 season, Detroit was featured on Monday Night Football hitting the road to face the Seattle Seahawks.

On October 5, the Lions lost 13-10 as Kam Chancellor forced a fumble punching the ball out of Calvin Johnson's hands. The ball went into the end zone and K.J. Wright guided the ball over the back line for a touchback. The Lions 91-yard drive with the go ahead touchdown was not meant to be and Seattle took the ball at the 20-yard line.

The NFL admitted that Wright should have been called for an illegal bat for hitting the ball out of the end zone, NFL VP of Officiating Dean Blandino told the NFL Network. The penalty would have given the ball back to Detroit at the Seattle 1-yard line.

The Seahawks got an early season gift. 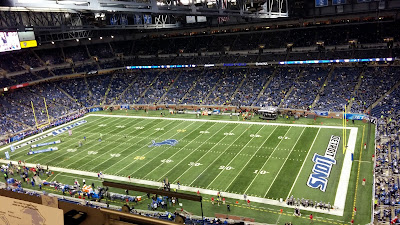 Once again, the officials played a big role in deciding the outcome of this contest.

With six seconds left to go in the fourth quarter, Devin Taylor committed a costly face mask penalty that gave Aaron Rodgers one last shot as his team trailed 23-21. Taylor barely touched Rodgers and it didn't appear to be a face mask from the numerous replays I saw.

Nonetheless, this set Green Bay with an un-timed down and Rodgers connected with Richard Rodgers for a 61-yard touchdown which gave the Packers a 27-23 win.

What a climactic ending to a good football game.

Now did the Lions lose solely on this play?

Green Bay scored on their final two possessions erasing a 23-14 deficit.  The Packers outscored
Detroit 13-3 in the fourth quarter. Rogers ran for a 17-yard touchdown, in addition to the Hail Mary Pass otherwise known as "The Motor City Miracle."

At the 5:44 mark in the third quarter, Matthew Stafford was at the Detroit 12-yard line, lost a fumble and it was recovered by Packers Jake Ryan at the 12. Three plays later, Rodgers connected with Davante Adams for an 8-yard touchdown.

As my colleague George Eichorn and I stood in the photo room after the controversial face mask penalty occurred, I told him that I had a feeling the Detroit Lions were in trouble. I've covered lots of football games at the Pro, Collegiate and High School Levels and have seen a lot of crazy things transpire especially late in games.

For 60 minutes, Detroit didn't trail in this contest. But when a future Hall of Fame QB gets a chance to beat you, that's a sign of trouble.

Eichorn gave me a strange look as I walked across the room with bad vibes. Then Rodgers went to work to hit Richard Rodgers thus ending Detroit's hope of sweeping the Packers in a season series since 1991.

By dropping to 4-8, Detroit's slim playoff hopes took a hit while Green Bay (8-4) is in first place in the NFC North/Norris Division.

There is no question that Coach Jim Caldwell wasn't looking forward to this post-game press conference. He would get second guessed until he was blue in the face.

Lions VP of Communications Bill Keenist and Media Relations Director Matt Barnhardt did their best to minimize the damage as they have all-year in a tough season which had high hopes.

In the short time I've known Caldwell, he seems like a real nice guy. The Lions were 1-7 but haven't quit on him.

But Caldwell isn't stupid and knows he's coaching in an organization which hasn't won an NFL Championship since December 29, 1957. There are four teams that have never appeared in a Super Bowl and Detroit is one of them and has only one playoff win in that time period, ironically against the Dallas Cowboys at the Pontiac Silverdome.

On this night, I was battling a cold and decided to take a low-keyed approach.

I had only one question, but another media member asked it.

Why wasn't Calvin Johnson in the end zone to guard against the Hail Mary?

"Because in that situation, we have a couple different things we can do," Caldwell said. "That was one where you're kind of looking for more of that pass back and forth kind of thing because of the range. He ran around there so long, moved up, gave himself a chance to get into the end zone. We had plenty of guys back there, we had plenty of guys. We just didn't make the play, they did."

Caldwell was asked the question, what was it like to go from a certain victory to a tough loss?

"There's no certain victory," he said. "Until that clock ticks zero, there's no such thing as a certain victory. I never feel that way. When it's over with, it's over, that's why I never smile during the course of games for the most part until it's over, and that's a perfect example."

Stafford would put up solid numbers by going 23-35, 220 yards and two touchdowns and zero interceptions. He rushed for 22 yards and was sacked three times.

Johnson had three receptions for 44 yards, one touchdown (17-yards) and was targeted eight times.

Johnson now has 15 career touchdown receptions against the Packers, which are the most by any player against Green Bay. He surpassed the previous high of 14 set by WR Randy Moss. He has played the Packers 16 times in his career, and has caught 90 passes for 1,409 yards (88.1 yds/g) with 15 touchdowns.

Stafford was asked about the catch Richard Rodgers made.

"It was a great play, you know, a tough way to lose one," he said. "The team played really tough, played really hard. Our defense played really good most of the game, so it's the NFL. Plays happen like that. It's not an easy pill to swallow."

Stafford was asked if he watched the final play?

"No I tried not to. I kind of peaked and saw the Jumbotron, and it looked like he was in pretty good position to make a catch, so I saw it at the very end."

During the course of the week, I've noticed Caldwell and his defensive coordinator Teryl Austin have shunned questions about Calvin Johnson/Hail Mary Pass. I don't blame them at this point as they prepare for the St. Louis Rams on Sunday in Missouri.

But it didn't take long for another face mask penalty to come into question in Arizona's 23-20 win over the Minnesota Vikings Thursday Night in Arizona.

There was no face mask penalty called as Vikings QB Teddy Bridgewater was grabbed.

NFL Network Announcers Jim Nantz and Phil Simms indicated that this was more deliberate than what happened to Aaron Rodgers. This non-call could cost Minnesota a division title.

As I breakdown some of the junk posted on social media I gag when I hear for the Lions to ever get rid of Matthew Stafford and Calvin Johnson; that would be completely absurd!!!

Stafford, 27, is the franchises all-time leader with 24,878 yards with 153 touchdowns and 97 interceptions.

Who would the Lions get to replace him? If you draft a young signal caller, there is still a major learning curve.

Unfortunately, Detroit has had three offensive coordinators in almost three years in Scott Linehan, Joe Lombardi and Jim Bob Cooter. There needs to be some stability in this area or this is a recipe for disaster.

Anybody thinking of firing Jim Caldwell right now needs to have a brain transplant.

He deserves to finish out the season and it appears that Martha Ford Firestone is smart enough to understand that. She realizes that it's best for the new general manager to decide if he continues.

It's not like Caldwell took a "Dumb Pill" after leading the Lions to an 11-5 mark last year and into the playoffs.

This doesn't fall on the coaches shoulders. You coach the players you're dealt.

I admired her bold move by terminating Lewand and Mayhew on November 5. Shortly thereafter, Caldwell dismissed three coaches to shake things up.

I will be curious to see how the rest of the season plays out, but Mrs. Ford has earned my respect because her style is much different than her late husband William Clay Ford.

At 90-years old, she doesn't have a passive bone in her body.

If the Lions have to make major upgrades during the off-season, they have to draft a top-flight running back out of college. The 2016 Draft has lots of good prospects in this class.

They need to balance the offense because the running game has been a major problem all year.

It wouldn't hurt to have a couple impact defensive players.

But what a bizarre week in Detroit.

On Wednesday, the Pistons lost to the Memphis Grizzlies as Matt Barnes knocked down a half court shot with 1.1 seconds to play as Detroit lost 93-92, 30 miles north on I-75 at the Palace of Auburn Hills. A victory over Memphis would have been Detroit's sixth straight at the friendly confines. That streak ended at five.

Fortunately for the Pistons, they play 82 games where the Lions play 16.

Berra's famous one-liner is "It's not over until it's over." This has to be engraved in both coaches' heads.

There is lots of intrigue for both teams. We'll just see which teams rebounds the best after these crushing and heart-breaking defeats.

I'll also be curious to see what happens the next time the Lions appear on National Television.

You can rest assure that while the Lions were losers against Dallas, Seattle and Green Bay, each network that they were on, had to do well with the ratings with all three games decided late in the fourth quarter.

Scott Morganroth can be reached at www.scottsports33.com and is a member of the Detroit Sports Broadcasters Association.
- December 11, 2015

Back To The Past

BY SCOTT MORGANROTH  When I was covering the Detroit Lions back in the 1980’s and 1990’s, one of my favorite  rivalries was when they faced...