One More Memory At The Joe

In the past two years, the date of December 1, has provided events to remember.

On December 1, 2014, My Cat Maverick Morganroth passed away because of liver and kidney failure. I had Maverick for 13.5 years and he's the best pet I've ever owned! When I pass away, his Box of Ashes will go with me to My Final Resting Place. 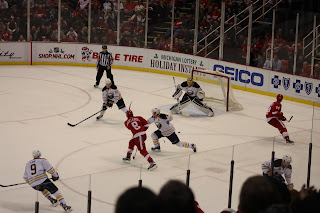 A year later on December 1, 2015, I returned to Joe Louis Arena (JLA) with My Photographer Candice Ebling. This was Ebling's first and only trip to JLA.

Before the game, we drove by the construction site of the Red Wings new arena. She also saw downtown Detroit at night, and didn't realize how close the United States and Canada were as she looked across the Detroit River.

It was neat returning to JLA seeing the Red Wings after a five year hiatus. Seeing Karen Newman sing the National Anthem and eating Little Ceasars Pizza in the Press Room made me feel at home. 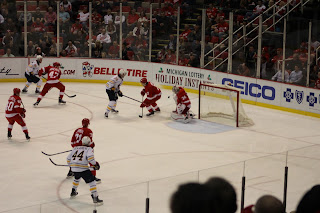 As for the game itself, Detroit defeated the Buffalo Sabres 5-4 in a shootout. This was my first time seeing the 3-3 overtime in person and it was exciting to watch.

Kudos to Red Wings General Manager Ken Holland for being the driving force by implementing this rule change during the off-season.

Petr Mrazek looked excellent in the shootout to earn the win.

This was my first opportunity to see rookie Dylan Larkin in person and this kid will be an All-Star Stud. I can actually see him becoming a captain within 2-3 years and he'll be the new face of the franchise.

If there is one advantage to being high in the Press Box, it's the ability to see all Championship Banners and Retired Jerseys.

The next time I see those banners will be at the new arena, unless by chance, I'm in Detroit for the playoffs during the Spring of 2017.

There was one person missing in The Press Box. 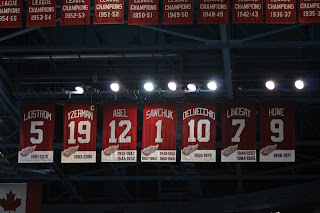 He was the PA Announcer at JLA from 1985-2012. We would talk a lot during pre-game meals, intermissions and at DSBA functions.

Lynch began his career in 1949 as the Red Wings Radio Play-By-Play Announcer. Lynch was the longest tenured employee in Red Wings history at 63 years.

I will say that when Olympia Stadium closed in 1978, I missed that building because the 16,000 seat Red Barn venue had very few bad seats.

JLA has it's own character. Being on the Detroit River across from Windsor, Canada was great in it's own right. I saw a lot of great hockey in this building.

But on December 1, 2015, it was a night to reflect on the memories of an Original Six team that I enjoy covering. It's always great seeing my friends and colleagues.

I'm very fortunate that the Red Wings play the Florida Panthers twice a year at the BB&T Center in Sunrise, FL now that they're in the same division in the Eastern Conference. 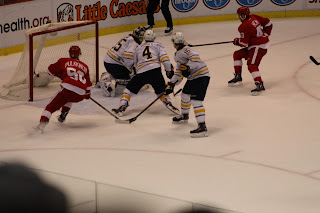 Red Wings fans always travel well especially in Florida where there are numerous transplants. The Red and White Jerseys are more noticeable at Panthers games because Florida draws smaller crowds than the Tampa Bay Lightning.

Holland and I have spoken numerous times about what a future stadium would look like.

He always told me that he was impressed with the Panthers Stadium. Nothing better than a glimpse of the future.

Yet, it was very neat to see a building of 20,000 fans at JLA wearing Red and White.

But as I explained to Ebling, once you've seen a game in "Hockeytown," it will be much different than when we're working Road Games.

With a 5-4 victory over the Sabres, it was great to see one more win at JLA. 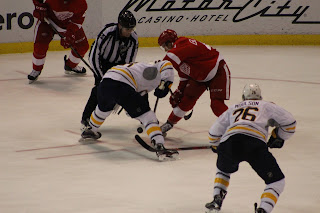 I saw one All-Star Game and enjoyed covering games on New Year's Eve.

If indeed this was my last time at JLA, it certainly turned out to be an evening to remember.

Scott Morganroth can be reached at www.scottsports33.com and is a member of the Detroit Sports Broadcasters Association.
- December 31, 2015