Nearly two months ago, I made my first trip to The Palace Of Auburn Hills in five years, while my Photographer Candice made her debut in this arena. 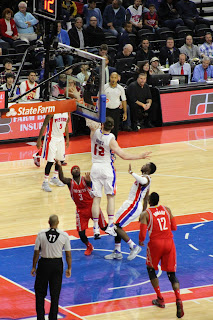 I give Owner Tom Gores and the rest of his administration credit for making improvements to this venue. I was touched by The Matt Dobek Media Room since he was a great friend and was very helpful in allowing me to do my job.

Detroit had six players that scored in double figures. Marcus Morris had 12, Ersan Ilyasova  had 13, Andre Drummond had 24 with 13 rebounds, Reggie Jackson had a game high 31 points, Aron Baynes had 11 and Stanley Johnson had 19 points and 10 rebounds.

As I look at the Pistons in general, there are several things which standout.

A year ago Pistons Nation wondered what life would be without Greg Monroe, who signed as a free agent with the Milwaukee Bucks who had a 41-41 mark last year. 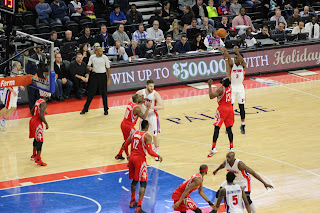 The Pistons are currently 24-21 as of this post and the lowly Philadelphia 76'ers come into town tomorrow night; this win total could be 25. Last season, the Pistons had a 32-50 mark and Monroe thought he could win elsewhere.

How did that decision workout out for Monroe? The Bucks currently have a 19-27 mark and during the off season, Ilyasova  was acquired from Milwaukee to replace Monroe in the front court.

After the Houston win, the Pistons would win three more home games and had a four-game winning streak. 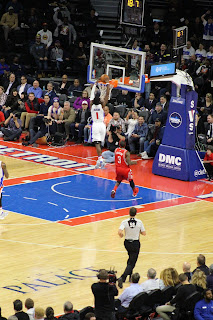 Great players take over games. And that's what Jackson (1) did and relished the opportunity to put away the Rockets.

"I was trying to be aggressive and find an easy shot," Jackson said. "I was able to get to the line a few times, and the ball finally went into the basket for us and kind of took the lid off. I started relaxing I think for the most part I think we went into panic mode, so we need to learn and relax and be above what's going on the court, and find a way to unite and play together."

Let's turn the clock forward to the present as the All-Star Break is upon us.

How do you spell respect?

A 113-95 hammering on January 16, 2016 over the World Champion Golden State Warriors (41-4) will do it. On a night where Ben Wallace's No.3 jersey was retired, a sellout crowd was able to enjoy the past and appreciate the future.

Will the Pistons have another triumphant night on February 10, 2016 against the Denver Nuggets when Chauncey Billups has his No.1 jersey retired? We shall see. 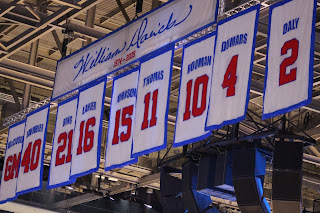 But I will say that I expected the Detroit Tigers to have retired the No.1 and No.3 jersey's, which belonged to Lou Whitaker and Alan Trammell before the Pistons retired respective jersey's for Wallace and Billups. Hopefully, Mike Illitch will get this done relatively soon. If you're proud of your tradition, then show it.

The Pistons 95-92 win over Utah last night was the first time Detroit swept the Jazz since the 2002-03 season.

This could be a great omen for a team that hasn't made the playoffs since 2009.

As I mentioned earlier, the Pistons won only 32 games last season. It's safe to say they'll surpass that and get into the playoffs.

Another sign of respect will occur when the Pistons host the New York Knicks at 7 pm, on February 4, 2016 as this game will be televised on TNT. 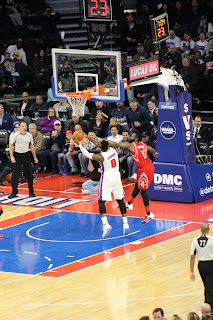 There is plenty of season left and there could be more National Appearances thus fans won't have to go to the NBA League Pass to find these contests.

There are three areas of intrigue for me as the NBA heads down the stretch.

First, will Van Gundy and his staff be active at the trading deadline as they were a year ago by landing Jackson?

Second, how much better will the bench get and what type of role will Brandon Jennings play?

Third, what type of contribution will Jodie Meeks make when he returns from injuries?

The NBA regular season is long with 82 games, but there are stories inside of stories and while the Pistons are a work in progress as well as far from the finished product, at least under Van Gundy's leadership, they're headed in the right direction. 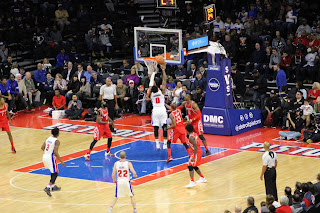 They don't need a move to downtown Detroit to sellout. Winning basketball has always produced capacity crowds, and frankly, I hope they never leave The Palace!!!

It's a beautiful building that Gores owns and why be a tenant if you don't need to be. Plus, there would be no scheduling conflicts.

I wouldn't have a problem with two exhibition games or 2 regular season games with the Toronto Raptors or Cleveland Cavaliers. But that would be as far as I would go.

But I'll be curious to see how this season plays out, trade deadline movement if any and what the roster turnover will be after the season. One thing seems certain is that Drummond (0) will get a maximum contract.

But at least for now, things are gradually getting better as we're getting a glimpse of the future.

Scott Morganroth can be reached at www.scottsports33.com and is a member of the Detroit Broadcasters Association.