Prior to covering the 2016 Buffalo Wild Wings Bowl on January 1, 2016, it was interesting to listen to Florida Gators alumnus that were skeptical about how this game would turn out against the Michigan Wolverines. The ones I spoke to didn't like the Gators chances in this contest.

I can appreciate what Gators fans were saying. They ended the season with a two-game regular season losing streak.  These two contests were over 14 points.

The downward spiral began on November 28, 2015 as in-state rival Florida State trounced the Gators 27-2. On December 5, 2015, the Gators lost the SEC Championship 29-15 to the eventual National Champions the Alabama Crimson Tide. 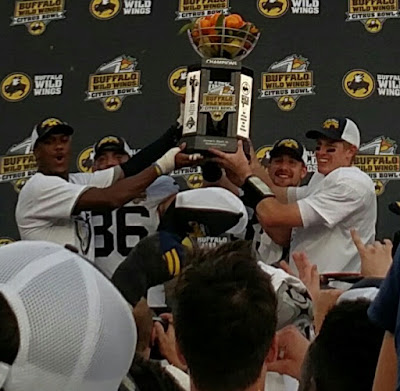 To make matters worse for Florida, the FAU Owls came into their November 21 game as heavy underdogs, but didn't leave that way, as the Gators survived a scare winning 20-14 in overtime in Gainesville. It's safe to say, this wasn't a good five weeks of football for the Gators.

The only good thing that came out of the Buffalo Wild Wings Citrus Bowl for the Gators was the payout of this game was $4.25 Million Per-Team. For the Gators, their travel expenses were not high since campus is approximately two hours away at the most.

The Buffalo Wild Wings Citrus Bowl Payout is the largest of all the College Football Non Playoff Bowls.

In this game, The Wolverines had three touchdown drives of at least 70 yards and finished with 503 yards of offense against a Florida defense that entered the game ranked sixth nationally.

The Wolverines offense was ranked 17th going into the game.

Michigan played without safety Jabrill Peppers, who sat out with an undisclosed injury.

How much did Michigan dominate Florida?

The Wolverines scored on seven of their first eight possessions, while piling up more points and more yards (503) than the Gators had allowed in a game all-season.

While Orlando, FL is the home of Disney World "Where Dreams Come True," it's been a good place for Michigan. The Wolverines are 4-1 in the Citrus Bowl and improved to 3-0 against the Gators all-time.

The Wolverines are 8-5 against SEC teams in Bowl Games.

What else stood out about this game? 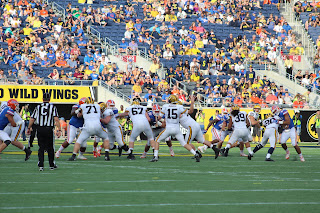 We'll start with Michigan QB Jake Rudock. All he did was throw for 278 yards and three TD's as he was the Citrus Bowl's MVP. Rudock had 20 TD's and nine interceptions for Michigan during the regular season.

I have a feeling that under Jim Harbaugh's direction, the Wolverines will be a QB Factory, which can only bolster recruiting at that position.

Rudock's career totals including his tenure with Iowa are 7,836 yards, 54 TD's and 27 interceptions. 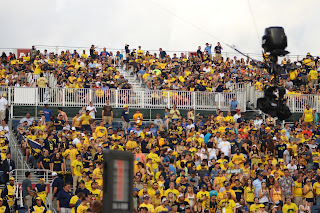 What also stood out was when we were at the Wisconsin vs South Carolina game two years ago, there were steel bench seats. Now the seats are Dark Blue chairs on the lower levels and the scoreboards are brand new. The stadium was renovated in 2014 and the Michigan vs Florida attendance of 63,113 was the highest since the remodel. 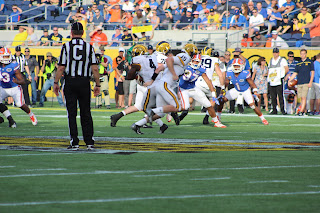 The only way you couldn't see the Buffalo Wild Wings Advertising all over the stadium is if you were blind. The Citrus Bowl was blanketed with the Black and Yellow all over the field and signs everywhere.

Other offensive players which made solid contributions included running backs De'Veon Smith 25-109 yards (No. 4 Photo) and Drake Johnson 6-58 and one TD. Rudock's primary targets included Jehu Chesson 5-118, one touchdown and Grant Perry who caught five passes for 51 yards and a TD.

What a difference a year makes. 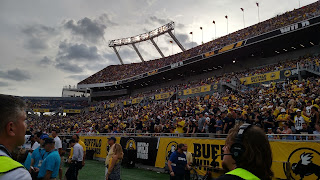 Here is what the coaches had to say after the contest.

Frank Shaw of Sports Talk Florida asked Harbaugh if this was his funnest year in Football and a little bit of a reflection post game?

"We coached a great group of guys. Really enjoyed to coach. The coaching staff was so good," Harbaugh said. "And I give them the credit in terms of coaching, but the way the staff came together, the trust that everybody had, we were real allies for each other. And everything, my family, my wife, Sarah, the way they have treated this past year and the kids and--I could go on and on."

Corey Coblit, WEYI in Flint, Michigan asked, "Would you say that after dominating Florida the way you did, this is the most complete team your football team has played this year?"

"Yes. I would--I'd say this was the best game we played all year. It was a great team win," Harbaugh added. "Like I said I don't think I've ever seen our offense play better. And our defense was magnificent.

"Credit to their Defensive Coach Greg Mattison, you know, world class football coach. And the three and outs, the stops, the play on third down, everybody playing great team defense, it was-- it was really good. And the special teams as well.

"I mean, we were darned nervous about the Florida return game. And they were good at it. And we covered the kicks. I think we only had one punt, but the kickoff covers was outstanding. We made all the kicks. We executed in every phase on the special teams and was really pleased. It was a great team win."

"I've got to tell you, I'm proud of that football team in the locker room,"McElwain said. "Obviously we didn't play well today, and I've got to give Michigan all the credit in the world. They took it to us, beat us up front, did a great job in the red area, kept us off balance, and I think more than everything, played with a pad level."

I have to admit that I was amazed at the amount of Wolverines fans that made the trip. It reminded me of a Detroit Red Wings vs Florida Panthers Game at the BB&T Center in Sunrise, FL.  Fans from Southeastern Michigan travel well.

What did the Buffalo Wild Wings Citrus Bowl do for both Michigan and Florida in the final polls?

Michigan finished 12th in the AP Top 25, and 11th in the Coaches Poll.

Meanwhile, Florida was 25th in both Polls.

One of the things I really enjoyed during the game was seeing three past colleagues again.

My former boss Joey Johnston and colleague Chris Harry were working the game. Johnston still works for the Tampa Tribune, while Harry is working for the Gators. 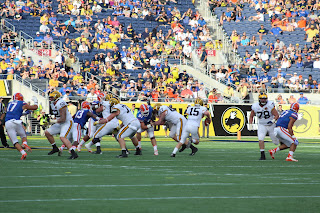 All in all, it was a bright sunny day in Orlando and the Michigan Wolverines domination of Florida will send a message to the rest of the college football world and that a "Sleeping Giant Has Awaken." I expect Michigan to be a major recruiting presence in The Sunshine State.

Meanwhile, the Gators are in good hands with McElwain, and he's been a winner at every coaching stop. There will be no shortage of talent in a state which is rich on prospects.

As for Rudock, look to see him in the NFL next season.

Scott Morganroth can be reached at www.scottsports33.com and is a member of the Detroit Sports Broadcasters Association.
- January 25, 2016