Tribute To The Greatest Of All-Time

On Friday June 10, 2016, Muhammad Ali was laid to rest in his hometown of Louisville, KY at The Cave Hill Cemetery.

The "Greatest of All Time" will Rest In Peace with Kentucky Fried Chicken Founder Colonel Harland Sanders. 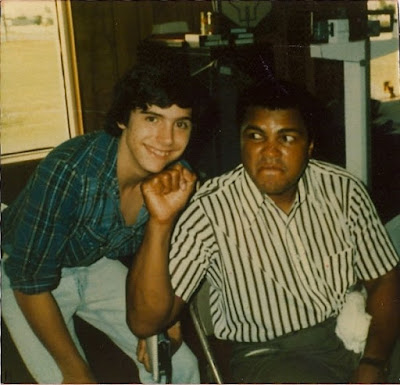 On Saturday June 4, 2016, the day after Ali died, I posted My Memorable 1982 photo with The Champ on Facebook.

I was touched, overwhelmed, and appreciative to My 90 Plus Facebook Friends with their acknowledgement of this incredible memory with Ali.

I feel extremely lucky to have spent two days with Ali as he trained for a charity fight at the Allen Park Gym in North Miami Beach, FL., in 1982. My Editor Dan Bluesten of The Hallandale Digest came up with a neat headline for my story "Is Ali On The Comeback Trail."

I had some great assignments with the Digest, but my time with Ali was No. 1.

I took this photo with him and also took My Aunt Pearl Cullen to visit "The Champ." Ali gave her a hug she'd never forget.

On June 4, 2016, My Cousin and Pearl's daughter Cindy Cullen Spyke called me to see if I was doing ok following Ali's death. She knew that Ali meant a lot to me.

As I look back at my time with Ali, when we talked, he began to develop slurred speech as Parkinson's Disease symptoms began to appear. Although Ali didn't have as many words, this photo was worth a 1000 words.

But to me, just being with "The Champ" overshadowed any speech issues.

However, when I asked Muhammad about his win over Heavyweight Champion George Foreman on October 30, 1974, he didn't mince words about what transpired of what happened in "The Rumble In The Jungle" when he described his famous "Rope A Dope" Strategy.

"I new George Foreman never went deep into fights so I just wanted him to punch himself out," Ali said. "There was no filler station for him to gas up."

Indeed, there wasn't and there would never be a rematch. Ali sent Foreman to a depressed state where George had a taste of humble pie.

The person behind my meeting Ali was his Trainer Angelo Dundee pictured with Ali below.

I used to cover a lot of boxing for The Digest. The events were held at the Diplomat Hotel in Hollywood, Florida and The War Memorial Auditorium in Fort Lauderdale.

I became great friends with Dundee as well as his brother Chris Dundee and boxing historian Hank Kaplan.

Dundee contacted me when Sugar Ray Leonard came to town and I wrote a story on him as well.

To even have the platform to be able to talk about Ali is incredible! 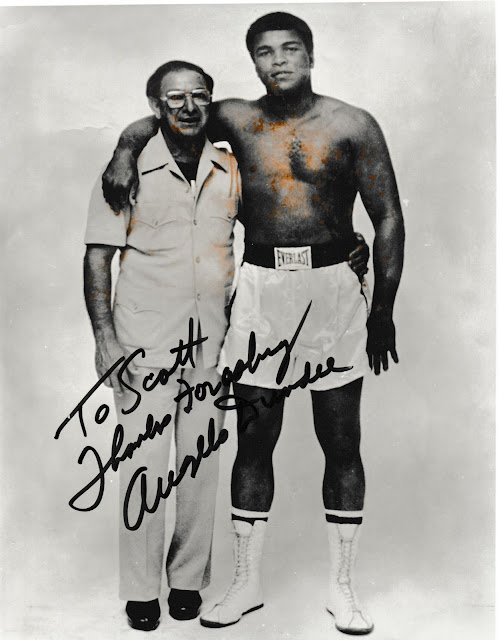 I have no desire to ever get into any political discussions about his viewpoints.

Ali was a True World Champion because he fought in London, England, The Philippines, and South Africa.

He never avoided a top opponent because everyone deserved a shot at the title.

I truly respect his decision to not want to fight in The Vietnam War because this conflict should have never happened in the first place.

I often wonder what the pay-per-view costs would be with his three fights with Joe Frazier and George Foreman.

If Mike Tyson, Evander Holyfield and Floyd Mayweather would get $50 for a fight, Ali's events could be worth up to $100.

Ali was an Albert Einstein in the ring because he out classed and out smarted his opponents. Boxing was a Chess Match for Ali because he could mix knockouts with going the distance if he had to. Before the Foreman fight, Angelo Dundee never knew about his "Rope A Dope" Strategy, as he had the ropes loosened before the fight. It's hard to not respect a person like this.

Leonard used to do the same and that's why he won World Championships.

When I hear stories that Ali never refused autographs to fans, and always took pictures when he could, this was incredible!

Ali was a great promoter of his fights and his Actions Spoke Louder Than His Words. He actually could be considered an inventor of "Trash Talking" because of his ability to play mind games with his opponents.

While it's sad to see Ali is no longer with us, at least he can now rest in peace. In recent years, Ali experienced numerous health issues. Now there is no more suffering.

Back in 2002, I did have a chance to see Ali again after a Phoenix Suns contest versus the Detroit Pistons at the America West Arena in Arizona.

I walked up to Ali, he smiled and shook my hand. There would be no photo opportunities in the Suns locker room to avoid a potential violation of Media Rules listed on the back of our credentials.

Nonetheless, it was still an incredible feeling because the first time I met him, I was just 2 1/2 years into My Media Career and was 19-years old.

During our second meeting in Phoenix, I was in my 23rd year in The Media, more filled out at the age of 39. By this time, Ali's speech was much worse and he was trembling. But I didn't care because it was great seeing him again.

During the past 10 days on Facebook, I was pleased to be able to see some of My Friends share their photos and stories with "The Greatest."

It was the thrill of a lifetime to have met such an iconic person.

My mother posted a touching comment on Facebook telling me how proud she was of me as a Sports Writer, and she has My Ali photo at her home.

But for all of the World Championships he won, in addition to the 1960 Olympic Gold Medal, seeing Ali light the 1996 Olympic Torch in Atlanta was truly breath taking.

Ali's legacy and passing should be viewed as a Celebration that should bring young and old generations together. With Google and You-Tube, we're always a click away from learning about a person or watching their great accomplishments.

I must have watched the Ali-Foreman fight a few times the day after he died.

All I can say is I'm thankful that I had the chance to see him on two occasions.

Being in Sports Media for 37-years, has allowed me to meet tons of incredible people.

I often wonder how many other photos I'd have if I had a camera phone early in my career.

Thankfully, I still have great photos that I'm thankful for, in addition to many great interviews on tape for those that are interested.

I may not be a wealthy man financially, but I'm rich in memories and experiences with plenty of stories.

There is no question that Ali is at the top of My List of people I've ever met.

All I can say Muhammad is that I Love You Very Much and Thanks for All The Memories We Spent Together.

Rest In Peace Champ Because You are The Greatest of All Time!!

When I come to Louisville, KY., I will be visiting You at The Cave Hill Cemetery!!

Scott Morganroth can be reached at www.scottsports33.com and is a member of The Detroit Sports Broadcasters Association.
- June 13, 2016