After watching the Green Bay Packers at the Jacksonville Jaguars on September 11, 2016, at Ever Bank Field, the Lions will be in for tough challenges with these teams. 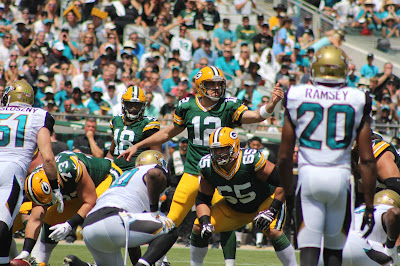 Let's start with the Packers, who had their hands full with Jacksonville.

Green Bay defeated Jacksonville 27-23 in 90 degree temperatures and it was 110 degrees on the field. The Packers had to wear their dark green uniforms which absorbed more heat with the humidity 55%.

The Jags put a canvas to protect their players.

Meanwhile, Green Bay used a portable AC Unit to pump air into Aaron Rodgers uniform, who in this photo is calling plays from the line of scrimmage.

Rodgers threw for 199 yards, rushed for a touchdown and passed for two more.

But Rodgers had a familiar target on the field, who missed the entire 2015 season. Wide Receiver Jordy Nelson returned and his presence was evident. In this photo to the left Nelson broke to the outside on a pass play from Rodgers.

He caught six passes for 32 yards and a touchdown.

With an additional 57 yards from Randall Cobb, in addition to 50 yards and one touchdown by Devonte Adams, Green Bay's three-headed receiving monster returned.

Add running back Eddie Lacy's 61 yards, plus 17 yards receiving, Lacy as you'll see in the photo made an incredible play going airborne. 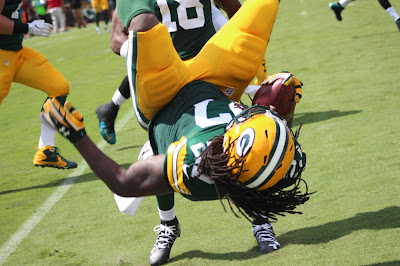 The Packers figure to give opposing defenses, and defensive coordinators many sleepless nights.

"The Quarterback (Aaron Rodgers) is a great player and made some plays for them," Bradley said. "They ended up making more plays than we did."

As for Jordy Nelson, "I know they look to him. We kind of had an idea that they are a really good combination. There is a lot of trust that goes on between those two (Rodgers & Nelson). They know each other real well, where they're going to be on certain routes and Aaron (Rodgers) trusts him.

"Whenever you have that type of combination, that's what all teams are trying to build and they are both elite players."

As for the Jags, there are many prognosticators which predicted them to win the AFC South.

Going into this game, Jacksonville was 11-10 in openers, 2-0 on September 11 and Green Bay led the all-time series 3-2. Jacksonville's loss to Green Bay turned out to be its fifth straight opening day defeat. 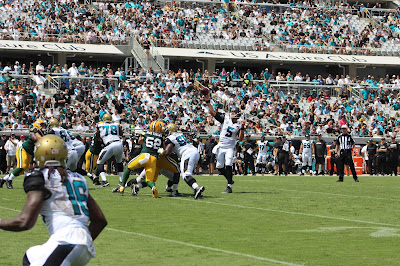 A missed fourth-and-one from the Packers 14-yard line with 23-seconds left to play in the game, changed all of the above numbers as the crowd of 63,179 became quiet.

When the Lions face Jacksonville on November 20 at Ford Field, they'll face potential All-Pro QB in Blake Bortles, who in this photo on the right is throwing a pass downfield.

He has a good running back in T.J Yeldon, who had 39 yards and one touchdown. The former Alabama running back also caught four passes for 30 yards.

Like Rodgers, Bortles also has no shortage of targets. 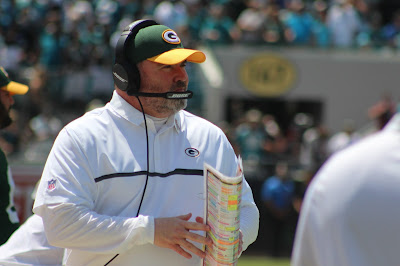 When the contest was over, Robinson knew the Jaguars had a real good opportunity to get a "W."

"It was frustrating to lose this game," Robinson said. "We had chances down the stretch. Me personally, I have to strain to be able to make some of the tougher plays. I've got to make more plays."

Packers Coach Mike McCarthy in the photo was relieved to depart Ever BankField with a tough triumph.

"I would classify that as a very good adversity win for our football team," McCarthy said. "We knew when the football schedule came out that this was going to be a challenge playing Jacksonville, an excellent football team.

"Gus (Bradley) does a good job and you see how these guys keep getting better each year. To play down here in this heat, it was challenging for both teams.

"It was a game of long drives. I was proud of how our guys kept fighting. The game came down to the last drive and the good pursuit and play of our defense."

Rodgers expected the Jags to be a tough opponent prior to the game, and that came to fruition. He added there was another extreme challenge to deal with.

"The heat was tough. It was hot for both teams," Rodgers said. "We were moving there with some tempo, both sides were dying.

"It's tough to win in this league, and it's tough to win on the road. After a few of us didn't play a lot in the pre-season, we went out there and battled against some heat. Thanks to our defense for finishing things off."

Rodgers was happy that he had a familiar weapon back.

"It feels great having Jordy (Nelson) back," Rodgers added. "He does so many things well out there. He had a great second and third reaction on the TD Catch."

Unfortunately for Jacksonville in Week 2, their trip to San Diego wasn't a kind one.

The Chargers hammered them 38-14 and Jacksonville dropped to 0-2.

Jacksonville is 0-2 for the fourth time in five seasons.

The Jaguars return to action at home as they face The Baltimore Ravens on Sunday September 25 at 1 pm, seeking to get their first win of the season. It remains to be seen if the heat will be a factor.

But the heat will be on the Jags to get on track and get into contention for the AFC South which figures to be a wide open race this season.

The Packers (1-1) remained on the road in Week 2 as they lost 17-14 Sunday Night to the Minnesota Vikings in the first game at U.S Bank Stadium.

Green Bay's home opener will be against the Detroit Lions on September 25. Detroit will be looking for it's second straight win at Lambeau Field and is coming off a devastating home opening 16-15 loss to the Tennessee Titans in which the Lions had three TD's called back because of penalties.

Scott Morganroth can be reached at www.scottsports33.com and is a Member of The Detroit Sports Broadcasters Association.