I have covered an NFL Game on Veterans Day on Monday Night, November 11, 1996 when the San Diego Chargers hosted the Detroit Lions, and it was an incredible experience.

Considering that the game was held in a Military Town like San Diego, this made it even more special with all the festivities.

On September 11, 2016, at EverBankField, this marked the 15th anniversary of this infamous day.

I lived in Chandler, AZ and was travelling to My Lawyer Harry Cawood's Office as I had a meeting pertaining to a divorce.

Cawood asked me if I heard about the attacks. I told him no and he said do you watch the news? 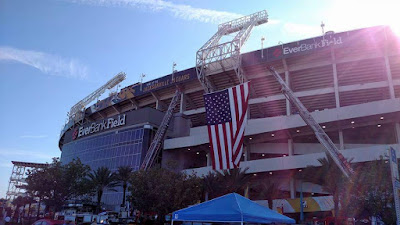 I said, I normally do but not when I'm driving as was the case to his office in Mesa, AZ.

Now it's time to fast forward the clock to this football game.

From the moment Candice Ebling and I drove to this game, there were American Flags all over the parking lots inside and outside EverBankField.

There was a lot of emotion on this day.

Everybody has their opinions about San Francisco 49'ers QB Colin Kaepernick's protest by sitting and kneeling during the National Anthem.

Personally, I have a problem with what Kaepernick is doing and all the other people that are following him. He seems to be drawing attention to himself.

But that's for another day for me to discuss more extensively.

What stood out at the Green Bay Packers vs Jacksonville Jaguars Game?

Ebling must have sweat off a few pounds and worked diligently to prevent herself from dehydration as she roamed the sidelines taking pictures for us. 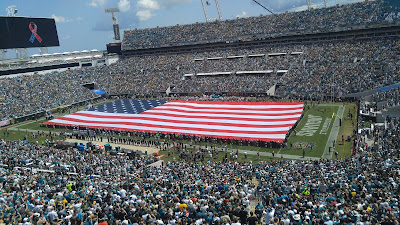 But watching The American Flag Cover The Football Field was an unforgettable sight and brought chills down my spine.

Going into the contest, the Jaguars were 2-0 on September 11, but that changed with Green Bay winning a thrilling 27-23 decision which was capped by a huge Packers defensive play with 23 seconds left in regulation time.

What also stood out were the feelings of Green Bay Coach Mike McCarthy and Jacksonville's Gus Bradley.

McCarthy described the pregame ceremony as "It was as emotional anthem I have seen in a long time. I thought the tribute was phenomenal just to see public safety, and the military, and everybody locking arms. I thought it was special, unique and obviously should be the focus of what today is all about." 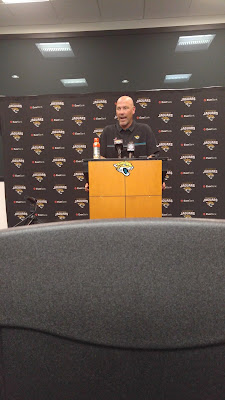 During the Jaguars post-game press conference, when I asked Bradley what kind of emotions was the team playing on the anniversary of September 11, his body language and voice inflections said it all.

"Well I think it hits you when you're standing there at The National Anthem, " he said. "We brought it up, we talked about it during the week, and just how special the game is because you take the time to remember what so many people have done for us to have these freedoms.

McCarthy and Bradley are leaders of men.

But I'm sure they'll tell you that their jobs don't compare to all the Commanding Officers and Generals which lead our country on the Battlefields, as they protect our freedom.

Back on October 24, 1971, I watched the only player in NFL history to die on the field at Tiger Stadium in Detroit as Lions Wide Receiver Chuck Hughes suffered a fatal heart attack against the Chicago Bears. He was 28 years old and I was only eight at the time and had nightmares that night. This was my first experience with death.

I would later find out that future friends and colleagues George Eichorn and Gus Pantelides were at this game on an autumn afternoon where the crowd was silent for the duration of the contest.

Why did I bring Hughes name up?

We have one player that passed away, where there have been countless of military people that have lost their lives. 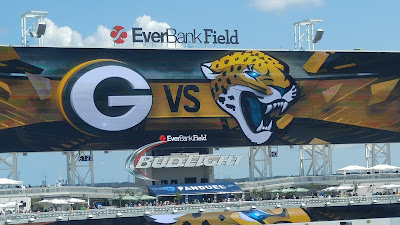 Don't think every coach on the planet especially in College and NFL Football remind their players to appreciate their freedom so they can enjoy the game. For college players, they get to pursue their NFL dream whereas with NFL Players, they get paid quite well for the game they love.

We know McCarthy and Bradley delivered this passionate message to their squads.

I'm glad that I've attended games in a pair of Military Cities, where the colors, Red, White and Blue, in addition to the Stars and Stripes, had POWERFUL MEANINGS.

Nothing I've experienced in 38 years in Sports Media will top covering four Super Bowls, including one in Jacksonville.

However, two games on Veterans Day and September 11, rank up there as Incredible Memories.

How ironic is it that both of My Games Occurred on the 11th day of the month, nearly 20-years apart.

Scott Morganroth can be reached at www.scottsports33.com and is a member of The Detroit Sports Broadcasters Association.