I'm not afraid to speak my mind on many issues especially when it comes to sports.

The only prediction I will make is that one of these two will win unless former New Mexico Governor, Gary Johnson, the 2016 Libertarian Presidential Nominee pulls off the biggest upset ever and surprises all of us.

I have better things to do than to get into needless arguments or debates that would raise my blood pressure which would cause me to get me sick. Thanks, but no thanks!

I would rather microwave a grilled cheese sandwich for four minutes. This sandwich is so hard that you could lose a tooth or break a triple pane window.

I actually cooked this sandwich when I was a student at the University of South Florida when I was learning how to use microwave ovens. I just tossed the sandwich.

But this beats landing into the emergency room for all the wrong reasons. Once again, talking about politics isn't my game. There is too much stress so there is no reason to add to it!

If I am with an individual/s where the conversation gets too intense, then I politely leave the premises!

The only Publications which thrive on Presidential Elections, are our beloved Comic Books.

With the Presidential Election one week from tomorrow, I've decided to lighten the mood in what appears to be one of the most anticipated and interesting elections in recent history.

I hope you learn and enjoy what you're about to read.
Did you know that Donald Trump was the owner of the New Jersey Generals of the defunct Spring United States Football League in 1984?


Before the 1984 USFL Championship Game, Trump invited myself and a handful of other reporters for lunch in his suite at the Sheraton Hotel in Downtown Tampa, FL. We spent an hour with him and I'm sure if I saw him, he'd remember me (nobody forgets me, I tend to leave a lasting impression).

I asked Trump what his vision was for a fledgling league which had good stadium leases plus strong National TV Deals.

He told me that he wanted the USFL to be as big as the NFL and was very polite to this young 21-year old sports writer.

Unfortunately, Trump's vision was 20/100 as he convinced the other owners to compete in the fall with the NFL, which became a disaster due to conflicts pertaining to stadium leases and the National TV Contracts.

The USFL sued the NFL and won a lawsuit. They won a $3 settlement and netted $1 which signaled the official end of the league.

I dare anyone to ask Trump about that on the campaign trail, as he's never owned another sports team again. I highly doubt that Trump would answer this question.

At one point, Trump was looking to buy and relocate to New York,  MLB's San Diego Padres, a franchise that was once owned by McDonald's Founder Ray Kroc. But that didn't come to fruition.

When Buffalo Bills Founding Owner Ralph Wilson died, Trump offered $1 Billion in cash to purchase the franchise. At that time, there was speculation the team could move to Los Angeles. I actually wanted Trump to land the Bills because I knew he wanted to keep it in Western New York.

But Donald lost the bid to Buffalo Sabres Owner Terry Pegula, and the teams future is on solid and stable ground.

If by chance Trump wins the election, don't be surprised if his former star running back Herschel Walker is hired in some capacity to be on his administration.

When former Red Sox Pitcher Curt Schilling talked about running for the Massachusetts Senate in 2018, providing his wife Shonda is on board, I was intrigued by this.

There is no doubt he'd win the election by a landslide because his clutch pitching snapped the Red Sox 86-year championship drought.

More importantly, he's not afraid to speak his mind on any issue.

Unfortunately for Schilling, his outspoken ways led to his abrupt departure from ESPN.

If Schilling does run, I hope he does well. 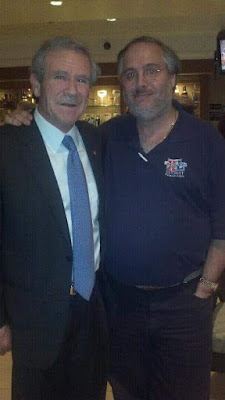 Let's take a look at other Sports Figures that are currently worth mentioning for this story.

* Former President George W. Bush once owned the Texas Rangers. He traded away a young prospect named Sammy Sosa, who went on to smash 609 home runs. Sosa played for Texas in 1989. Sammy and I worked together in 1987 when I was The Director of Public Relations for the Gastonia Rangers.

It was really fun at a Deerfield Beach Observer Christmas Party to take a George Bush look-a-like picture which I still get comments about.

* Former Seattle Seahawks WR Steve Largent was inducted into the Pro Football Hall Of Fame. He amassed 819 receptions, 13,089 yards and 100 touchdowns. Largent was a Member of the U.S House of Representatives, from Oklahoma's 1st District from November 29, 1994 - February 15, 2002.

Bing entered Detroit Politics as a Democrat in 2008, announcing his intentions to run for Mayor in the city's non-partisan primary to finish the term of Kwame Kilpatrick. Kilpatrick resigned amid a corruption scandal.

After winning the primary, Bing then defeated Interim Mayor Kenneth Cockrel Jr. He was sworn in as Detroit's 74th Mayor in May of 2009. Later that year, Bing was re-elected to a full term, and stayed on the job until December 31, 2013.

He had his No.7 retired by Phoenix and was a three-time NBA All-Star. Johnson also had his No.11 retired by the University of California.

While he never played for his hometown team the Sacramento Kings, and may have caused them heartaches on the court, he did bigger things for the franchise.

Johnson was at the forefront in landing a new stadium which opened this year. He saved the team by not allowing other cities like Anaheim, CA and Seattle from stealing the Kings.

* My All-Time Favorite is Jack Kemp.
If there is one regret I have, it's not getting a picture with Kemp when we met at Super Bowl XXXIX in Jacksonville, FL., because I didn't own a camera phone.

But I have the next best thing, a Thank-You Card from USA Football coming from his secretary.

When I told Congressman Kemp I was a writer from Detroit, he smiled and gave me a one-on-one interview. We walked to a quiet place in the Jacksonville Convention Center.

It would take too long to mention his political career/involvement though it does date back to the 1960's.

During Kemp's football career, he was originally selected by the Detroit Lio 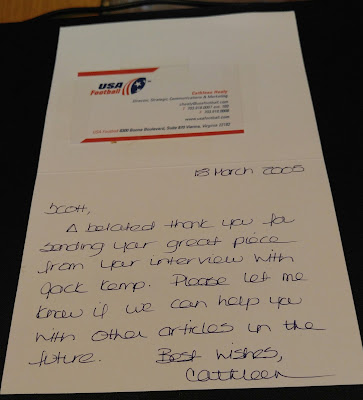 ns in the 17th round of the NFL Draft. Jack was cut from the team before the 1957 NFL Season began.

His accomplishments would occur mostly with the competing American Football League (AFL). He was a two-time Champion with the Buffalo Bills, a seven-time AFL All-Star, five-time First-Team All AFL, won the 1965 AFL MVP, and is currently on the Buffalo Bills Wall of Fame.

He played the 1959 Season with the CFL's Calgary Stampeders.

But this experience with Kemp was an absolute thrill to speak about football, in addition to politics with a well rounded individual, who treated me fantastic!

There is no doubt this was one of the best memories I've had in Sports Media in 38-years.

When Congressman Kemp died on May 2, 2009 because of Cancer, I have to admit that his passing stung for a long time!

But Jack Kemp will always have a special place in my heart.

Bradley played 10 years for the New York Knicks as a shooting guard and small forward. He won two NBA Championships for the Knicks and was inducted into the Basketball Hall of Fame in 2006.

Watts played QB for the University of Oklahoma. He played professionally from 1981-86 in the Canadian Football League for the CFL's Ottawa Rough Riders. Watts won the Grey Cup MVP in 1981. He never played in the NFL. He spent the 1986 season with the Toronto Argonauts.

He played in the NFL for the Washington Redskins, New Orleans Saints, and the Oakland Raiders.

5. Gerald Ford--from 1932-1934, he played center, long snapper and linebacker for the University of Michigan Football Team. Ford helped the Wolverines to undefeated seasons and national titles in 1932 and 1933.

But what a list. As I researched this, I was amazed at how many of these athletes traded their uniforms for suits, shirts and ties.

The only other athlete that I can predict will join this list is NBA Hall of Famer and Current TNT Basketball Analyst Charles Barkley.

His Alma-Mater Auburn University is building a statue in his honor not only for his basketball accomplishments, but what he's meant to the Tigers overall.

Whatever office that Barkley wants to run for in Alabama, I wouldn't bet against him.

He's great behind the microphone, and Barkley's brash and outspoken nature landed him on national television.

I could see him flourishing in politics.

At any rate, when Election Day takes place in a week from tomorrow, this gives a much different perspective of  where some of these Public Service People could come from.

The ones mentioned in this story entertained the Public Between The Lines then proceeded to serve the Public Outside The Lines.

Scott Morganroth can be reached at www.scottsports33.com and is a Member of the Detroit Sports Broadcasters Association.
- October 31, 2016