There were two Interesting Coaching Changes recently in South Florida.

One I can understand while the other was mind boggling. 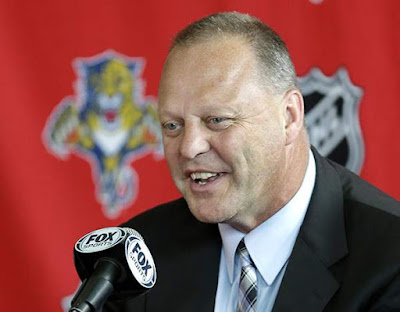 Let's start off with the mind boggling dismissal.

On November 27, 2016, former Red Wing Gerard Gallant was fired after going two-plus seasons with the Florida Panthers. Gallant was 96-65-25 in his tenure in South Florida.

Gallant led the Panthers into the playoffs last season and was replaced by General Manager Tom Rowe. According to Rowe, Gallant wanted a little bit more size and the Panthers wanted to go in a different direction.

In Florida's short tenure in the NHL dating back to 1993, Rowe becomes the Panthers 14th head coach to sit behind the bench at the BB&T Center in Sunrise, FL.

Gallant was a Coach Of The Year Finalist last year and now by Christmas, he will be home for the holidays. He led the Panthers to a division title last year and the best regular season in franchise history with a 47-26-6 mark with 103 points.

This season, the Panthers have battled injuries and were 11-10-1 when he was ousted.

Fortunately for Gallant, he was under contract through the 2018-19 season, having signed a contract extension back in January.

As I mentioned before, Rowe becomes the 14th Panthers coach and the fifth person to be behind the bench in the last five years.

Nevertheless, I don't expect Gallant to be out of work long.

Who knows where his next stop will be and since he's being paid to go away, there is a new expansion team set to begin play in 2017-2018 and it's in another warm climate called the Vegas Golden Knights.

Golden Knights Owner Bill Foley is looking to build a winner quickly, and after a successful tenure in Florida, I wouldn't be surprised if Gallant becomes a serious candidate for this job.

In three years as coach of FAU, Partridge guided the Owls to a 9-27 record----with three consecutive 3-9 campaigns.

On Saturday, November 26, 2016, Partridge's last game with the Owls was one for the ages for perhaps all the wrong reasons.

FAU lost 77-56, and yes, this is a football score, to the Middle Tennessee State Blue Raiders on the road.

Folks in Michigan should be very familiar with FAU. The Owls defeated Central Michigan in The Motor City Bowl 24-21 on December 26, 2008.

FAU lost a pair of games to Michigan State in East Lansing, plus played the Spartans in a home game at Ford Field when its new on campus stadium wasn't completed on schedule.

FAU has only been to two Bowl Games under the legendary Howard Schnellenberger. In addition to the Motor City Bowl, FAU also played in the New Orleans Bowl. FAU is 2-0 in Bowl Games. 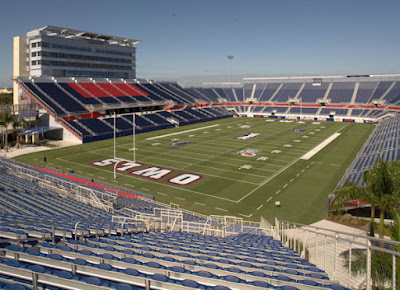 The program has recently produced some NFL players with the most notable being running back Alfred Morris of the Dallas Cowboys, in addition to QB Rusty Smith, formerly of the Tennessee Titans, wide receiver Lester Jean formerly of the Houston Texans, and many others.

Beautiful FAU Stadium has a capacity of 29,419, has a yearly Bowl Game and is the only venue in the USA that overlooks an ocean. If you're high enough, you can see the Atlantic Ocean. The stadium can also be expanded to as much as 60,000.

In the past couple of weeks, FAU's rival Florida International University (FIU) made a big coaching splash when it hired former Miami Hurricanes Coach Butch Davis.

When Partridge was fired, I knew that for FAU to be relevant, the Owls had to make a big splash of their own.

Aside from the loss to Middle Tennessee State, this is as close to rock bottom as you can get.

Some of the names which made sense to me that FAU would be ideal candidates for the job included former FIU Coach Mario Cristobal along with former Tampa Bay Bucs Head Coach, current Ohio State Assistant Coach and former Rutgers Head Coach Greg Schiano.

Another coach which came to mind was former University of South Florida (USF) Boss Jim Leavitt, who built that program from scratch and former Hurricanes Coach Randy Shannon.

All of these coaches have big Florida ties.

While none of these names will roam the sidelines, FAU did exactly what I feel they had to do and that was make a big splash with this hire.

The new coach is Lane Kiffin.

He's as high profile as it gets!

Kiffin was a head coach for the Tennessee Volunteers, USC Trojans and Oakland Raiders. He's been the offensive coordinator for Alabama the past three years under Nick Saban and has had the Crimson Tide competing for a National Championship.

Truthfully, I never thought that Kiffin and FAU could connect.

But as the opportunities dwindled with Baylor, Oregon, Houston, USF as well as other big time jobs being filled, this began to make more sense by the minute.

As I understand, Kiffin's salary at Alabama is $1.4 Million Annually but his three-year contract was up at the end of the season.

At FAU, he's slated to earn around $950,000 Annually over five years, but there is No State Income Tax in Florida, plus incentives.

At age 41, Kiffin goes into a situation where he has a young football program which began play in 2001. Aside from the two Bowl wins, it has no real tradition.

FAU has won just 19 games during the past six seasons, and the entire athletic department's budget for this year was projected to be $27.1 Million.

This is an opportunity for him to build a legacy of his own and perhaps return to a Power Five Program down the road.

But to understand this hire, since Friday when Kiffin's name became a real possibility to become the Owls coach, the publicity FAU has received nationally is incredible.

Aside from traditional, social and digital media, ESPN and many of the other sports networks have swarmed like bees over this hiring.

ESPN has blanketed Kiffin's hiring on all of it's major programming platforms.

The Media is wondering whether Kiffin took a step backwards to go to a smaller program to return to the head coaching ranks. Some wonder if he fails at FAU will this be damaging to future opportunities?

Whatever story lines may be, the free publicity for FAU is comparable to hitting a grand slam home run.

Like Schnellenberger did from the outset, should Kiffin's offensive mastermind follow him to South Florida, this program could be a Hidden Gem. More importantly, Kiffin will have a chance to once again put this football program on the map.

One of Kiffin's strongest attributes is his ability to recruit.

With that said, the talent in Florida can support a lot of FBS teams when you consider Miami, Florida, Florida State, USF, UCF, FIU and FAU.

The State of Florida is a Gold Mind of talent all over the country. Michigan and Michigan State have recruited a lot of players to my home state.

There is no reason that FAU can't keep these players home as Kiffin hopes to do. I wouldn't be surprised to see Lane snap up a few prospects from California.

He'll be coaching in Conference USA which is a solid conference to play in and does produce it's fair share of NFL players.

While I know the hiring of Kiffin is drawing many mixed reviews on Facebook and Twitter, this is one time where I feel it's too early to make any preliminary predictions as to how well FAU and Kiffin do together.

In summary, My Gut Feeling tells me that FAU actually made a good hire, while the Florida Panthers decision to part company with Gerard Gallant is like trying to figure out the Rubik's Cube.

Scott Morganroth can be reached at www.scottsports33.com and is a member of The Detroit Sports Broadcasters Association.
- December 14, 2016