There are many namesakes that have attempted to follow in the footsteps of their legendary fathers.

Some have made it and others had difficulties due to the pressure of enormous expectations.

Time will tell if Barry Sanders Jr., and Keyshawn Johnson Jr., will have the same success as their fathers on the gridiron.

Meanwhile, Cal Ripken Jr., Ken Griffey Jr., and Dale Earnhardt Jr., made their fathers proud and have created a legacy of their own.

Ken Norton Jr. decided to not pursue Boxing and has had a stellar NFL career as a player and a coach.

I know there are many other individuals that I've probably overlooked. 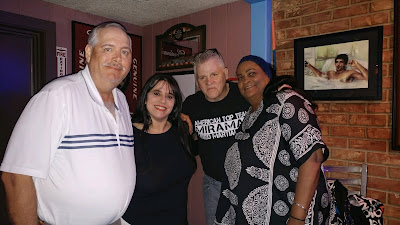 Lisa represents "JD & Lisa Entertainment" and we've worked together on past projects including our most recent one, "The Real Rocky" also known as Chuck Wepner.

I had an opportunity to meet Khalilah Camacho-Ali, the mother of Ali Jr. She's a nice woman that has an amazing sense of humor. In the photo she's on the far right.

Ali Jr. turned 45 and he's been in the news recently by being detained at two airports because of his Muslim Religion.

I will not address nor elaborate on the extent of President Donald Trumps travel ban on Muslim's although Ali Jr. was inconvenienced by this ordeal.

Since this story is sports, we'll leave it on a Sports Media Platform.

The entire focus on Ali Jr., will be sports based as we look at the Life and Times of the son of his legendary father, Muhammad Ali, also known as "The Greatest Of All Time."

As I got to know Ali Jr., I showed him a photo of myself and his iconic father which was taken when I wrote a story on "The Greatest Of All Time" at Allen Park Gym in North Miami Beach, FL., in 1982. As you'll see in this photo with Ali Sr., I definitely didn't need Jenny Craig or Weight Watchers diet. 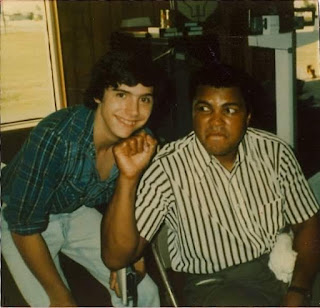 In this photo, I was 19-years old and weighed 120 pounds and there was no sign of any gray hair.

But it was neat to speak with Ali Jr., and share stories that I had with his iconic father.

It was fun to watch Ali Jr. as he admired my photo and we got to know one-another then proceeded to take photos together.

I've been interviewing high profiled people for years and I have to admit that Ali Jr., was one of the most colorful individuals I've met.

In this Exclusive Interview, we'll look at the Life and Times of Muhammad Ali Jr.

Q: I followed your dad's career and his trainer Angelo Dundee was a good friend of mine. Did you ever consider a career in Boxing?

A: I considered a career but it wasn't boxing. When I was little, I told my father that I was going to be a Dentist. He said ' Why do you want to be a Dentist?' I said because I can knock the teeth out instead of pull them out. That's what a kid would say.

I was just a kid, so what I did I know. I was just being me. I don't want to be a Dentist anymore. I actually want to become the President of The United States and make the world a better place.

Q: Muhammad, what's it like for you to bear a name of such an iconic figure as your dad?

It's not me. I don't have the heart to hit anybody. If he hit me, I wouldn't hit you back. That's the type of person I am. So it's hard. It's really hard. 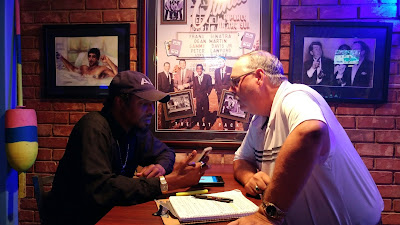 Q: What type of relationship did you have with your father? As I understand, you were estranged from him for a number of years?

A: I was estranged from him for a number of years because of his wife. His wife stopped him from seeing his own blood brother. Me and my father's relationship was like a brother-to-brother relationship because we would talk about anything until she got in the picture. Then it was kind of hard to talk to him. I'm referring to his last wife Lonnie.

She made it where at times where I would see my father and I was hurting because I didn't have any money. I asked him for some money and he give it to me. But you know since he was married to her, I went to ask for money, she would pull me aside, and told me 'don't ask your father for money.'

That's like me coming to you asking and telling you, don't ask your father for money. I have no place in that. You're not my mother and no relation to me except but being his wife.

She had no children, just an adopted child. That all simply makes you the mother of a child. Legally it does because it's on paper, but biologically, no. So birth right, no.

I'm the only really be gotten son. I don't care if there is an adopted child or whatever. He's not the blood son of him. If he was the half son then maybe he's a blood son. But if you're not born of a woman and a man, then you're an orphan.

Q: Muhammad, I know when you have a father that's legendary, he's on the road a lot, and in many instances children of athletes are neglected especially since they have absentee fathers. I read that you were bullied by boys who wanted to prove that they can beat you up being a champion's son.

How difficult was that for you?

A: It really wasn't difficult because guys that pick on me wanted to see if you're like my father. Are you scared of me? I told them that I'm not scared of nobody but God. He hit me in the nose and made my nose swell up. After that, I was cool. We became friends. I stood for what I believed in. I'm afraid of God, not afraid of you. I'm not afraid of any man.

Q: But don't you feel at times though that normally when you're related to someone like your dad that guys would want to take a shot at you just to boost their ego or anything?

A: Who are you to show when you are no pro? You aren't standing for it. I mean sometimes you have to throw down just to get respect. Some people take an ass whipping to get respect. I mean you have to do something to stand your ground to get that respect and that's what I did. I got beat up and hurt for it but no pain and no gain, right?

Q: No conversation with an Ali would be complete without talking about your dad's epic and historic victory over George Foreman in 1975 where he regained The World Heavyweight Championship with an impressive eighth round knockout. I know you were very young. What were your thoughts about this fight?

A: Well I saw it as my father was in the early stages of Parkinson's Disease and it was actually bothering him. The footwork wasn't going so good.

I talked to George about the fight and asked George how did you feel after that fight? He said man, I couldn't sleep for a whole year after fighting your father. I said wow!

Q: During the course of your dad's career, do you think that was your favorite fight compared to the many other ones he had?

A: Yes, because when George Foreman went to Zaire, he had a Belgium Dog-German Shepherd, and to the people of Zaire, that was a Police Dog to them. So they didn't like George Foreman because he had that type of dog. So they rooted for My Father.

Q: Were there any other fights that stood out in your dad's career such as the great trilogy with Joe Frazier, plus the rivalry with Ken Norton Sr.?

A: My father fought Joe Frazier (In The Thrillla In Manila, Phillipines) and both of them were almost ready for the hospital after that fight. They both beat each other up big time.

Q: One of the newest fads going on right now is Mixed Martial Arts (MMA). What are your thoughts about MMA?

Q: Finally, Muhammad, nowadays I hear you do a lot of Public Speaking. What do you talk about?

A: I talk about respect for all people, all life matters, not just black life. But there is always features on the TV with black people killing each other. You never see anybody else doing the same thing. Black life matters is not to be racial, it's because all life matters. 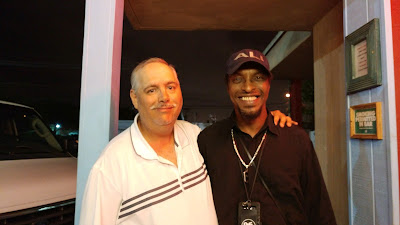 It's gotten to the point where black people are killing each other. Then you have cops killing black people. It really doesn't make any sense. The violence needs to stop. Whether the cops do it or we do it, it needs to stop.

After the interview, I have to admit that during the course of our interview that having spoken to Muhammad Ali Sr. and Muhammad Ali Jr. that they are indeed two different people.

But one thing remains the same with both. They're not afraid to speak their minds and are fortunate enough to utilize their platforms quite well.

Nevertheless, how often does an individual get an opportunity to speak with an icon then several years later speak with his namesake?

All in all both were totally rewarding experiences on much different levels.

Scott Morganroth can be reached at www.scottsports33.com and is a member of the Detroit Sports Broadcasters Association.
- July 04, 2017