I have to hand it to the Detroit Lions, they certainly knew how to stay quiet about Coach Jim Caldwell's contract extension.

In Detroit's 24-10 win over the New York Giants on Monday, September 18, ESPN Announcer's Sean McDonough and Jon Gruden could have acted as agents to get Caldwell a contract extension. They were emphasizing to management how necessary it was to keep him.

Going into the contest, Caldwell had a 29-21 record.

What McDonough and Gruden didn't know is that prior to Caldwell, only four Lions coaches since 1951 had winning records.

In an interim role in 2000, former Michigan Wolverines Coach Gary Moeller led Detroit to a 4-3 .571 record only not to be retained by new CEO and GM Matt Millen the following season.

One Coach who nearly compiled a .500 record but holds the most wins in franchise history which dates back to 1930 when the team was the Portsmouth Spartans, is Wayne Fontes. 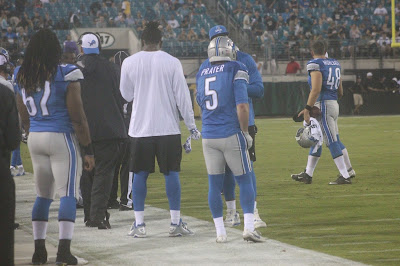 Fontes was 66-67 with a .496 winning percentage and his team, led by Hall of Fame Running Back Barry Sanders produced the squad's last playoff triumph over the Dallas Cowboys in 1991. Fontes piloted the team from 1988-96.

But Millen's tenure turned out to be a disaster in many ways.

Under his leadership from 2001-07, Detroit compiled a 31-81 record and a .277 winning percentage. The Lions compiled nine losses in each season and he hired Rod Marinelli, who would be the only coach in NFL History to record an 0-16 season.

This would ultimately lead to the formation of the Rooney Rule.

But who would have thought that the only African-American Lions Coach in franchise history would have a 29-22 .569 mark going into Sunday's road game against the Minnesota Vikings?

Caldwell's body of work is equivalent to his classy demeanor as he never made a big deal about his contract and never wanted to be a distraction.

The guy has guided Detroit to a pair of playoff appearances, and has led the team into the post-season overcoming the retirement of future Hall of Fame Wide Receiver Calvin Johnson.

His QB Matt Stafford earned tremendous praise from McDonough and Gruden in the Giants game because of his scrambling ability along with his ability to extend plays with his feet, let alone a quick release.

Is Stafford worth the $135 Million contract that he recently inked which amounts to $27 Million Per-Season, which is the highest at the moment?

Judging by the sound of McDonough and Gruden's compliments, the answer is yes.

More importantly, there are a lot of teams that are having issues with their signal callers, but the Lions aren't one of them.

Former Florida Gators QB Tim Tebow is 1-1 in the playoffs and there are many signal callers that have been to the tournament many times that don't have a playoff victory.

A lot of Caldwell's wins are coming from the foot of kicker Matt Prater, who drills game winners and 50-yarders with tremendous frequency.

Against the New York Giants, Prater nailed a 56-yarder that dribbled over the goal post. I expect him to have a solid game in Minnesota, playing in a dome.

After the Lions win over the Giants, things would not get better for a team that actually plays in New Jersey.

Pro Bowl Wide Receiver Odell Beckham Jr. made an idiot out of himself by celebrating active status with team handshakes.

He also tried to draw attention to himself by wearing gold cleats for the MNF Warmup. 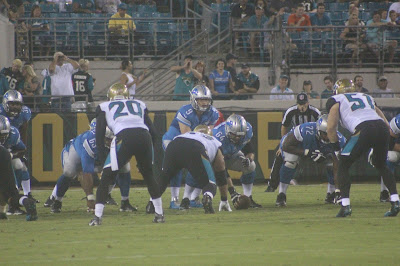 McAdoo looked bad by ripping Manning. Eli was 22-32 for 239 yards, but was sacked five times by Detroit.

You don't throw the franchise QB under the bus, especially one that has won two Super Bowls.

As for Beckham, while he didn't get hurt, he did deliver a hit on Lions rookie first round linebacker Jarrad Davis, formerly of the Florida Gators. Davis would go on Concussion Protocol and missed the Lions 30-26 loss to the Atlanta Falcons at Ford Field.

Detroit dropped to 2-1 but came a yard short of yet another comeback win for Stafford.

How did Manning and Beckham do in week three against the Philadelphia Eagles?

Manning was 35-47, 366 with three touchdown passes and two interceptions. His numbers were better because he wasn't sacked.

Mr. Hotdog Beckham caught nine passes for 79 yards and two touchdowns, but once
again created drama for all the wrong reasons.

He took an unsportsmanlike 15-yard penalty and was fined $12,154.00 for pretending to urinate like a dog on the field.

Philadelphia won the game 27-24, thanks to a 61-yard field goal by rookie Jake Elliott, who is filling in for veteran Caleb Sturgis as the Giants dropped to 0-3. I wouldn't be surprised to see Elliott in another uniform once Sturgis returns.

One other thing that stood out in the Lions vs Giants game was when McDonough made a mistake as he said Lions Offensive Lineman Taylor Decker was from Michigan and Not from Ohio State.

I understand that Decker's very passionate about the rivalry, but everybody makes mistakes so get over it Taylor and focus on helping your team return to the playoffs and getting a tournament win, something that hasn't occurred since the 1991 Season when the Lions played at the soon to be demolished Pontiac Silverdome.

Since the Lions rarely appear on Monday Night Football, I rarely watch McDonough, 55 and Gruden, 54, but I have to admit these guys do a nice job together.

I'm looking forward to seeing them again on Monday, November 6, 2017 when the Lions visit their Wisconsin nemesis, The Green Bay Packers at Lambeau Field. 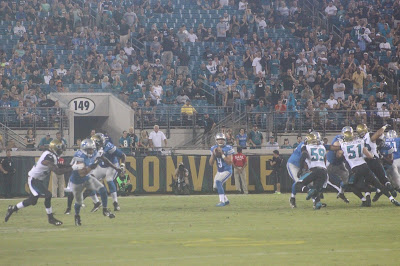 This is a contest that I'm looking forward to writing about and I've seen these clubs meet numerous times both in Wisconsin and in Michigan.

I learn a lot from Gruden because he's a guy who won Super Bowl XXXVII in San Diego as his Tampa Bay Buccaneers pounded the Oakland Raiders 48-21 with an average QB named Brad Johnson.

There will be no shortage of Honolulu Blue and Silver appearances as Detroit has five nationally televised contests this year including their annual Thanksgiving Game, so the Lions will be spread around all the networks.

This will save my pocketbook in the Sports Bars and I'll actually be able to hear what these commentators are actually saying.

One story line that could come up is whether Detroit will win a playoff game and perhaps more, under 92-year old Owner Martha Firestone Ford, who hired Caldwell and therefore, both have a 29-22 record.

One thing is for certain, there will be No Secret about Caldwell's contract the rest of the year when the Lions appear on another Nationally Televised Game, since his contract was just recently extended.

But Caldwell's success on the field will be decided by his Gunslinger Matthew Stafford and as I mentioned earlier, the leg of kicker Matt Prater.

While Prater will be kicking against the Vikings, ironically the Detroit Tigers will conclude their season in Minneapolis at Target Field against the playoff bound Minnesota Twins.

Scott Morganroth can be reached at www.scottsports33.com and is a member of The Detroit Sports Media.
- September 29, 2017