There are certain individuals that I get inspired by in different ways and NBC Hockey Broadcaster Ed Olczyk definitely struck a chord with me due to his recent battles with Colon Cancer. 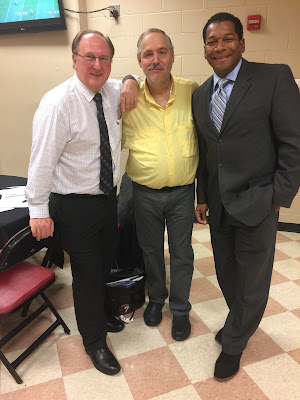 Olczyk was diagnosed with Colon Cancer on August 8, 2017.

Not the type of news you want to hear before your birthday.

But the Chicago native whose nickname is "Edzo" has been through a lot of adversity, but I admire the courage he's demonstrated in handling his Cancer diagnosis.

Olczyk had to recover from a 5 1/2 hour surgery to remove a tumor and a section of his colon before he could begin his chemotherapy.

Olczyk has undergone three chemotherapy treatments and has nine to go.

Five weeks after starting a 24-week chemotherapy regimen for Colon Cancer, Olczyk returned for an NBC Broadcast of a Wednesday Night Rivalry Game between the Chicago Blackhawks vs St. Louis Blues in Missouri. He was paired with his Hall of Fame Partner Mike "Doc" Emrick.

I was inspired by his words on the broadcast and that I wanted to use his courage in a positive way.

This year has caused me to deal with numerous health challenges.

I've had to deal with a Misdiagnosis of Parkinson's Disease, thus causing me to take medication which I shouldn't have been taking.

All of this was caused by tremors, mini seizures, and I'm still dealing with this right now.

In February, I was hospitalized a week due to Staph Infection, and as a Newlywed, it wasn't fun spending My first Valentine's Day in a hospital. I can think of more romantic places than that.

My Diabetes was getting worse as My A1C rating climbed, but thankfully, I've regained control of the situation by dropping a lot of weight due to an extensive exercise adjustment and a major overhaul of my diet.

As the year progressed, My Doctor decreased that medication.

I am feeling much better than I have in a long time. I'm still continuing to lose weight and admit that it's fun being thin again!

My goal is to get below 200 pounds and I'm confident I can attain that pretty soon. I've reached the low 200's. Since February, I've lost over 60 pounds.

But the challenges continued as I had to deal with Prostate Surgery in June.

From there, I would be told that I'd have to have a Pacemaker in My Body to correct some Major Internal Problems. This would turn out to be a two-part procedure, and of all the years that I've been operated on, this undoubtedly turned out to be one of the most demanding surgeries!

There was a small issue before I could be cleared for the Pacemaker to be installed. 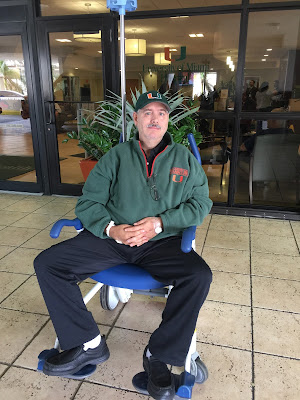 During Pre-Operation Clearance, there was a Blockage In My Heart and I had to see a Cardiologist at the University of Miami days before this operation would be performed.

Ironically, I was cleared before the Prostate Surgery, but there were blockages and abnormalities that took place in just a 90-day span.

The doctor did clear me for The Pacemaker, but he did tell me to have my regular physician look into this when I have my yearly physical which is going to take place in a few weeks.

Throughout the year, I've drawn from the gracious moral support from my wife, family and friends as they've been tremendous in their encouragement.

I was very moved by My Friends on Facebook who also offered their prayers, get well wishes and support.

My Pacemaker Surgery took place on October 24, 2017 at the University of Miami Hospital.

There was one minor issue as My Health Insurance was in Pending Status, thus it delayed the operation by a five hours.

What's even crazier was the fact that my wife and I had to wait in the admissions waiting room for five hours, and this place was like a freezer.

But we stuck it out and did what we had to do.

Time will tell about the impact of this operation.

I do know that I won't be able to have any more MRI's, and going through Security Checks at Airports as well as Sporting Events will be much different.

My recovery time figures to take several months, however, I'm not going to worry about this because Cancer and Heart Patients don't have it easy.

I do face the probability that My body does Reject The Pacemaker and is prone to Infections, but I understood that going into the surgery and accepted that risk.

Former Detroit Red Wings Announcer Dave Strader died recently because of Cancer and Olczyk, a person that I would like to meet one day, are individuals that continue to inspire me. 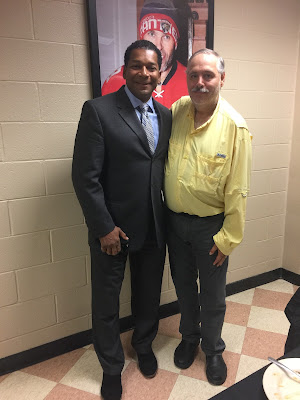 As I said, I'm blessed with the support system I have.

What I do know is that I was under Excellent Medical Care as the University of Miami is one of the Best Hospitals in the country, thus I had Zero Anxiety.

Four days after my surgery, the Detroit Red Wings visited the Florida Panthers on Saturday, October 28 at the BB&T Center in Sunrise, FL.

In my mind, this was a game I wanted to cover, but the only way I could do this was to take it slowly for three days leading to the contest as well as afterwards.

The day of the contest, I rested all day before we took off for the game. I got a ride home from my photographer afterwards.

The Red Wings only play the Panthers twice a year down in South Florida, unless they were to meet in the playoffs, which hasn't occurred yet.

I'm thankful that I have a lot of great friends that I get to see when they come to South Florida.

Dana Wakiji, Ted Kulfan of the Detroit News, Helene St. James and Mike Lewis of the Panthers PR Department, are some of the nicest people you'll ever meet. 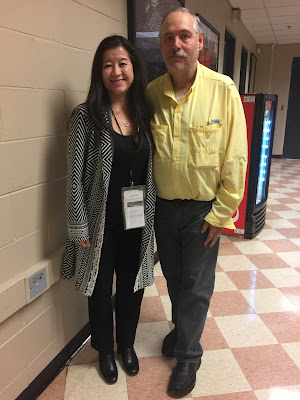 Thompson kept telling me to get my work done by the second period and leave early to get some rest. But I have a policy that I don't leave sporting events early.

As it turns out, the Red Wings defeated the Florida Panthers 3-2 in a shootout and snapped a six game losing streak. These two teams always play great games in this venue.

The Red Wings took their Florida momentum back to Detroit and defeated the Arizona Coyotes 5-3 Tuesday Night and now have won two contests in a row.

When I got home, I sent Thompson a text message and told him that I look forward to seeing him at the Detroit Sports Media Christmas Party on December 8, 2017.

He told me when I go to Little Caesars Arena that I better expect to do a lot of walking. I told him when I started working out to lose weight, I walked 73 miles in one week, and put together multiple weeks of 30-40 miles in this Florida Humidity.

As I've told my longtime colleague George Eichorn, it's a whole lot easier to walk when you can go to the beach and listen to the sounds of the ocean. Deerfield Beach is great with it's boardwalk.

But I respect Thompson as a friend and colleague but have to admit that I lost count of how many times he told me to get some rest. But I knew he cared about me and this came from his heart.

But as I summarize all of this, Olczyk's passion for Hockey is the same as I have for Sports, and until the time comes when I'm dead, if I pace myself properly and listen to those individuals close to me, I'll be fine.

In the meantime, Olczyk Inspired me and I look forward to the day that our paths cross.

Right now, My next challenge is covering some NFL Games the rest of the Fall and you can rest assure the travel time will be much greater than the 20 minute trek I took from the BB&T Center to My House in Deerfield Beach, FL via The Sawgrass Expressway.

And of course I look forward to seeing Thompson and Company back home in Detroit during early December. It's been years since I've been to a Christmas Party and I'm pleased that the timing works out this time.

Scott Morganroth can be reached at www.scottsports33.com and is a Member of Detroit Sports Media.