A Nice Turnaround In Northern Florida

The last time we saw the Jacksonville Jaguars on December 24, 2016, they hammered former head coach Mike Mularkey and his Tennessee Titans 38-17 at EverBank Field.

In the game, the Jaguars improved to 3-12, and Tennessee QB Marcus Mariota left the game due to a fractured fibula.

Jacksonville would finish the regular season with a 3-13 mark.

Things have drastically changed since we were in Northern Florida 11 months ago.

The Jaguars hired former Coach Tom Coughlin to run the football operations and he wasted no time naming Marrone as the permanent head coach.

Coughlin's presence has been felt by two organizations.

His former team The New York Giants are 1-8 and Sunday lost to the previous winless San Francisco 49'ers, who are now 1-9.

The distance between Jacksonville's EverBank Field to the Giants MetLife Stadium in East Rutherford, NJ is 932 miles north on I-95.

With moderate traffic, it's 15 hours and 37 minutes and without traffic, you're looking at 13 hours and 34 minutes.

What's also changed since December is Jacksonville drafted running back Leonard Fournette from LSU and he's improved the running game. 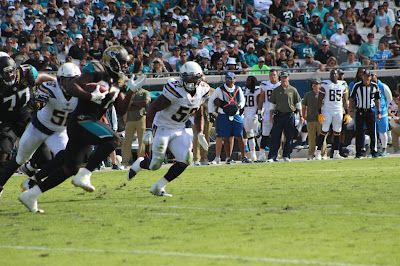 Going into this weekend's action, Fournette has 147 carries for 629 yards and six touchdowns. He's also caught 17 passes for 149 yards and another touchdown.

Fournette learned quickly that when he recently had disciplinary problems, Coughlin and Marrone suspended him for one game sending a clear message to the team that this regime won't tolerate any problems and distractions.

EverBank Field also looked different behind the south end zone as it's more closed in and is louder because of a new amphitheater called Daily's Place (capacity 5000) which holds small concerts and events.

If you're looking for a hard hitting game then this was it.

The Jaguars had nine penalties for 106 yards while the Los Angeles Chargers were flagged seven times for 77 yards. I have to admit that it was tough not saying the San Diego Chargers.

This was a contest that on the surface had two great young running backs on display.

The Chargers Melvin Gordon and Fournette went into the game looking to put on a running show. Instead, they had games they'd like to forget.

Gordon had eight attempts for 16 yards, plus three receptions for nine yards. Fournette had nine carries for 21 yards. 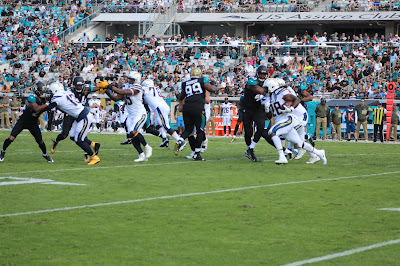 Part of Gordon's struggles were attributed to the Jaguars recent acquisition of defensive tackle Marcell Dareus (99), who played for the Buffalo Bills a couple weeks ago.

The 6-3, 331 pound run stopper gave Gordon very little room to move in the backfield. He amassed four tackles as you'll see in the photo.

After the game, I spoke to Dareus and I told him his former team Buffalo got hammered 47-6 to the New Orleans Saints.

I also told him there is no state income tax in Florida and he wasn't shy about being pleased to be playing in the Sunshine State getting a fresh start.

He said he likes what he's seen so far with the team and says if this team get into the playoffs it would be like comparing it to a piece of popcorn and seeing the colonel pop. 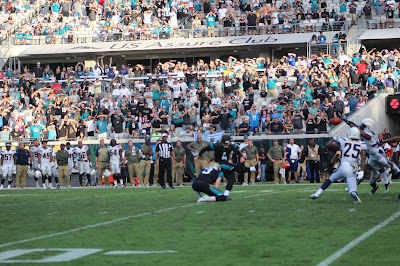 The Jaguars had 398 net total yards and Los Angeles 322. Jacksonville won the contest 20-17 in overtime.

Cornerback A.J. Bouye came up with a crucial interception in overtime that led to the game winning field goal by Josh Lambo. Lambo, formerly of the Chargers, haunted his old team by converting a 30-yard field goal 3:12 left in overtime for the victory.

Bouye posted four tackles and the interception against the Chargers. 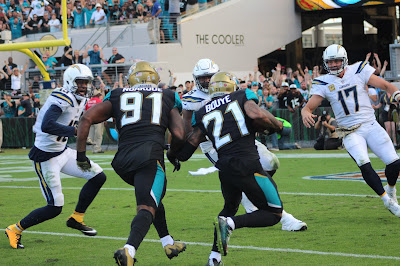 As a result, he was named AFC Defensive Player Of The Week and is the third Jaguar to earn that honor this season.

The win improved Jacksonville to 6-3 and doubled it's victory total in 2016.

Throughout the day, I spoke with a lot of the media and asked them about speculation concerning the future of QB Blake Bortles.

There has also been speculation of Giants QB Eli Manning, 36, rejoining Coughlin, but because Jacksonville continues to win, the situation wouldn't be addressed until the offseason.

Bortles was 28-51 for 273 yards with one touchdown and two interceptions. He also rushed five times for 34 yards.

With all due respect to Bortles, he lost his top wide receiver Allen Robinson to injury during week one.

Jacksonville drafted Dede Westbrook in the fourth round and the 6-0, 178 pound speedy receiver from Oklahoma, underwent core muscle surgery and has been on injured reserve. He is expected to be activated this weekend. 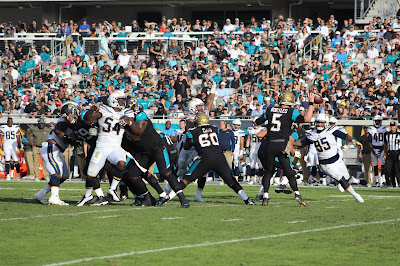 When I asked Bortles how difficult the season has been without two weapons, he said, "It's been a challenge. Those two guys you said, anytime you're playing with those two guys, we have both seen what Allen Robinson is capable of doing. We have talked about it before.

"He goes down and that's a lot of production that's lost and Westbrook with his ability and not being out there. I think it's a tribute to Nathaniel Hackett and what he's been able to do and the offensive staff, schematically and scheming things up to get guys open. Then that room has taken it on themselves and the running backs and tight ends have helped us out as well. It's been a group effort with those two guys not being out there to be able to kind of keep the pass game rolling."

A crowd of 60,835 were loud and Bortles said that "It's awesome to have a real home field advantage. It's something that hasn't always been that way in the past and something we wanted to try and bring back. Coach Coughlin came up here and talked to us at the beginning of the season and talked about back when he was here, the support and how the city was when they were rolling.

"That's something that we talked about last week a little bit. We want to make sure that this is an advantage when we come play in Jacksonville in front of our fans. They've been incredible all day like you said."

When the game was over, Marrone was asked if he enjoys these close games?

I'm exhausted right now. I'm shot," Marrone said. "I'm living and dying on every single play with every call that we have, but every play and call I have, you know what I mean.' So after the game is over, I'm shot."

Marrone added that the main thing is "Obviously we came away with a win which is obviously the objective. You know it's difficult in this league when you've been in the league for a while, these types of games where you're just trying to grind them and just find a way to get an opportunity to win the game."

What did Marrone think was the reason the Chargers (3-6) did to slow down the running game?

If Marrone was exhausted over this win, he'll have a week of stress that Detroit Lions Coach Jim Caldwell dealt with.

The Jaguars coach has to face the 0-9 Cleveland Browns and doesn't want to be the team which allows them to notch their first win.

For those individuals that think Jacksonville has QB issues, since 1999, the Cleveland Browns have used 28 signal callers.

For the Jaguars to leave "The Super Bowl Non Participation Club" that has the Detroit Lions, Houston Texans and the lowly Browns, it would be wise to not overlook and underestimate this team.

The Lions would sure like company in the 0-16 club and the Browns are the only winless squad left in the NFL.

To say the Cleveland Browns contest for Jacksonville is one of the biggest games of the year for the Jaguars is mildly under stating this.

But it is because they're expected to win this game.

Jacksonville leads the all-time regular season series 11-5 over the Browns, have won two straight and three of the past four meetings.

Marrone knows it and after the Chargers game, he's very appreciative of the fan base which has been starving for a winner for years. A loss to the Browns would only be detrimental to getting fans to return.

"I think first of all, I want to credit the people that are here that do give us the advantage because they do a heck of a job," Marrone said. "I still go back to the same course that I took early on when I would get asked that question if we're building a home field advantage.

"I think we have to go out and continue to play well and earn that right. I really believe that. If someone was to say, 'Well, I don't want to see those guys, I just hope that they give this time an opportunity to come out and watch this team.

"I think if they do, I think they'll be happy with the type of effort we have. I think the people that are here are great. We would love to have more, we really would, but we have to understand that it's on us to bring them here."

It will definitely be interesting to see which organization makes greater strides to get into the playoffs.

There are men with the Lions and Jaguars who have been to Super Bowls.

Tom Coughlin has a pair of Super Bowl wins with Manning as his QB. 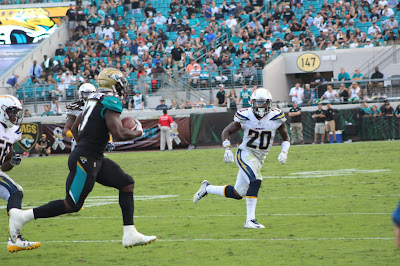 Coughlin was the first coach of the expansion Jaguars in 1995, and has led this franchise to two AFC Championship Games in 1996 and 1999.

A tale of two organizations looking to finally reach a Super Bowl with starving fans.

Will it take a Hall of Fame QB to win a Super Bowl and do either of these franchises have one?

There are no playoff wins between Matthew Stafford and Bortles.

It will be interesting to see how all of this plays out in the coming weeks.

As I mentioned before, the Jaguars hope to avoid a letdown in Cleveland while the Lions (5-4) face the Chicago Bears in Illinois.

Jacksonville enters the Cleveland contest in first place thanks to the Pittsburgh Steelers 40-17 thrashing of the Tennessee Titans Thursday Night. The loss dropped the Titans to 6-4.

Tennessee and Jacksonville could play for the AFC South Title in Nashville on December 31, 2017.

Scott Morganroth can be reached at www.scottsports33.com and is a Member of The Detroit Sports Media.
- November 17, 2017