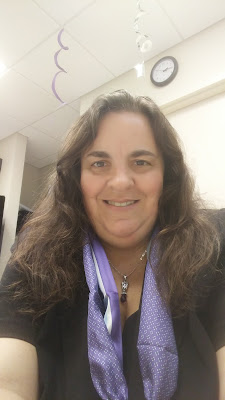 I'm very proud to announce that Candice Ebling has joined me on the editorial staff.

She will make her writing debut covering the NHL All-Star Weekend from January 27-28 in Tampa. This is a move which I've been considering for quite some time.

During my five-year association with Ebling, she's done an outstanding job as our photographer working extensively with the NFL, NHL, NBA, College Football Games, MLB as well as other assignments.

I marvel at her creativity when she's taken photos and some of her action pictures have been off the charts.

What impresses me about Ebling is her attention to detail and despite being 5-foot-3, she finds a way to overcome this and get what she needs to in order to overcome her height challenges.

When we're not at sporting events, her knowledge of sports amazes me. We can have stimulating conversations that last hours and even days on certain subjects. Some will go on for weeks.

When we'd go out to dinner with my parents, she would hold a conversation with my father real well and even educated him on certain topics.

My father's body language and voice inflections indicated that he was impressed at how knowledgeable Candy is in sports.

One of the most recent things she would talk about were head injuries in the NFL regarding Chronic Traumatic Encephalopathy (CTE) which is a neurodegenerative disease found in people who have had multiple head injuries.

She's had other interesting conversations with him about other sports and while my mother feels left out watching the banter go back and forth, she still is amazed that Ebling is as knowledgeable about sports.

Ebling will have a variety of assignments on this platform.

I've worked with numerous women in sports through my 39 years in Sports Media, and Ebling could hold her own with many of them.

We'll be incorporating a debate feature called Point-Counter-Point where we'll take sides on given issues.

During my years in the media in radio and newspapers, my longtime colleague George Eichorn and I had a lot of fun with this concept.

There is no doubt Candy will do well with this as well as other columns that she decides to write.

She defines the word Photo-Journalist and will continue to take photos for us.

When she learned of this decision, she quipped with me and said "You're having me cover a sport that I know the least about."

She's done an outstanding job when Eichorn and I have thrown her into the NHL fire and she acclimated quite well.

She never knew much about the NHL until she began hanging around me.

When she informed her father, two sisters and brother of this move, they were excited. But they've known her as a photographer and not a writer.

They definitely were excited for her and wondered if she felt comfortable writing. She was honest and said not really, but embraced the challenge of learning a new craft.

There is no doubt that Candy has the creativity to do well with being a writer and with her knowledge and passion, this move to elevate her to Editorial Status is undoubtedly overdue and a nobrainer!

Ebling, who has a Bachelors Degree in Business Administration and Finance from The University of Wisconsin-Whitewater, will find Sports Media a far cry from what she learned in college.

But to get through college, she had to take an English Class and write papers to graduate.

Now what better way to break in on the editorial side than on the NHL's Big Stage at the end of the month?

But she'll do fine and I look forward to helping mentor her as she continues her acceleration into some more big events in the future.

She won't need a lot of mentoring as long as she combines her creativity, knowledge and passion into words.

I'm excited in helping her begin this journey and I hope all of you appreciate what she'll bring to the table.

Up in heaven, her mother is looking down on her and is very proud of Candy in discovering she has a skill she never knew she had and is smiling.

Scott Morganroth can be reached at www.scottsports33.com and is a member of Detroit Sports Media.
- January 15, 2018