Throughout the years, I've worked my fair share of Bowl Games and there were a lot of activities to keep fans and media busy. I really embrace those memories.

But I have to admit, The Outback Bowl is a totally different and refreshing experience. 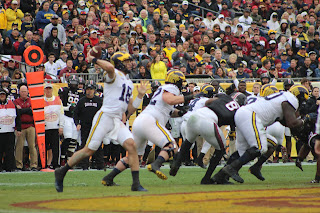 When I looked at the itinerary a few weeks ago, these people really get it when it comes to the KISS Theory: Keep It Simple Stupid or as I would say, Straight Forward.

On January 1, 2018, I completed My Major Florida Trifecta by covering The Outback Bowl featuring the Michigan Wolverines and South Carolina Gamecocks.

In the past, I've covered multiple Orange Bowls and Citrus Bowls, but this was my first Outback Bowl.

There have been some interesting coaches in this group such as Bobby Bowden, Lou Holtz, Pete Carroll, Steve Spurrier and Jim Harbaugh.

There were a few things that made this match-up quite interesting.

The programs are miles apart in tradition.

The small picture was South Carolina had a 2-1 record against Michigan and was 1-0 in Bowl Games as these two met on January 1, 2013. The Gamecocks prevailed 33-28.

Would Michigan, which has been to the Outback Bowl more than any other Big 10 School with six appearances get revenge? 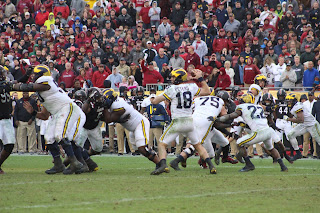 For much of the game, it appeared that way as the Wolverines led 9-3 at halftime and built up a 19-3 lead into the third quarter.

At one point, when I was looking at My MVP Ballot, I considered U-M Kicker Quinn Nordin as he connected on four field goals. Nordin's four field goals tied a school high set by Travis Fortney, against Penn State in 1999.

But when it was all said and done, Michigan would let this game slip away by committing five second half turnovers. South Carolina scored 23 unanswered points in the second half and even missed a late game field goal which gave Michigan a punchers chance at the end.

A crowd of 45,687 watched South Carolina pull out a 26-19 win in 50 degree temperatures and light drizzle which might have caused the smaller turnout. 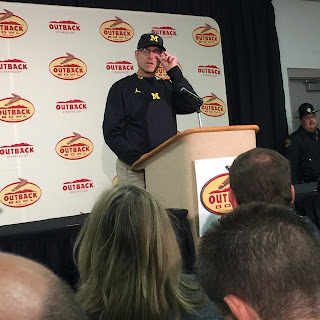 Wolverines freshman QB Brandon Peters threw two fourth quarter interceptions including one in the end zone which could have given U-M the lead.

Unfortunately for the Wolverines, the numbers don't lie.

South Carolina forced five Michigan turnovers in the win (three fumbles, two interceptions), the most in its bowl history.

South Carolina's defense held Michigan to just 2-for-17 on third downs and 277 yards in the game.

Michigan Coach Jim Harbaugh was asked if he felt the game slip away at any time, or did the Gamecocks get better as the game went along.

"I think they did get better," he said. "I think probably both of those things. They got better as the game went on, no doubt, and made great plays to win the football game. We didn't get the knockout punch when we needed it. We didn't take advantage of the opportunities that were there." 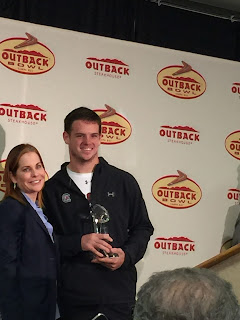 Gamecocks sophomore QB Jake Bentley would turn out to be the player who earned My MVP vote by passing for 239 yards and two touchdowns. He did win the honor as you can see him with the trophy.

When I asked him about defeating a team with Michigan's tradition, he smiled and said, "Yeah, I mean, obviously Michigan has got a good history that we don't, and to be able to beat them and get a W is huge."

"But building up to the game, I mean, this is a different Michigan team than it was last year or two years or back in their history. It's just trying to take it game by game, just getting a big bowl win I think is the biggest thing right now."

The Gamecock's finished the season with nine wins, which is tied for the fifth highest in school history.

South Carolina now leads the overall series with Michigan 3-1, with the Gamecocks winning the last two meetings, both in the Outback Bowl.

South Carolina is now 7-9 against the Big 10 Conference.

Those numbers had Coach Will Muschamp very pleased especially since he inherited a 3-9 team in 2015.

"This is a really great team win for us, ninth win this year, only the seventh team in school history to do that," Muschamp said. "But all the arrows are pointing up for us. Our administration is investing in our program, our football operations building, the things that we're doing to be successful."

"We're going to have those trophies soon, and I'm looking forward to our future. So I appreciate it. It's been a great week." 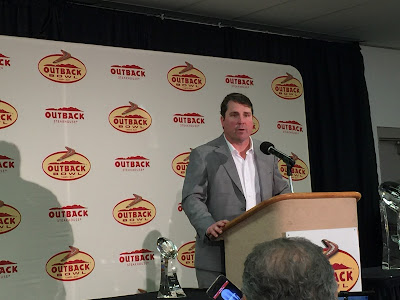 "I think we've made some progress. It's easy to point at tangible things and say, this is good. It helps in recruiting, obviously. It obviously helps your fan base. We've got to continue to move forward. The great thing about it is we're building, and 70 percent of our offense was freshman and sophomores. We have a bunch of really good players coming back next year."

"We need to have a great off season. I told the guys, I thanked the seniors, but told the underclassmen, when you come back in January, all gas, no brakes, lets get ready to roll and that's what we need. You've got to keep pressing forward. You've got to stay hungry in everything you do, and that's what we're going to do in our program, and certainly we scratched the surface of what I think we can do."

Muschamp said there were no speeches delivered on the sidelines when his team trailed 19-3.

"No, I wish those worked. I'd be good at them, but they don't," he said. "No, I think that it's 365 days a year how you run your program and the culture of your program, and our guys understanding at halftime we're 9-3. We gave them short fields. We actually moved the ball against a very good defense. But you know at the end of the day, we play 60 minutes, and our guys understand that, and they keep chomping and they keep hanging in there.

"Never once did I feel like the game was in the balance as far as I was concerned."

While Muschamp had plenty to say, Harbaugh on the other hand made it easy write down what he had to say.

The Wolverines entered the game with an 8-4 record and have now lost three straight. Harbaugh was asked about the reason?

"It's just being able to just sustain the momentum, keep the momentum and then get the knockout punch. That would be my thought right now." 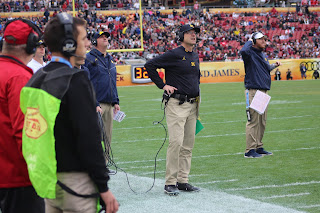 The Big 10 entered the Outback Bowl with a 7-0 record and a Michigan win would have given the conference an undefeated 8-0 mark. Nobody at the press conference asked him about this however, one reporter did ask that with the possibilities that have opened up in the NFL, is there a possibility this is the very last game you'll coach at Michigan?

It's amazing that Michigan has played in 38 January Bowls and was playing in a January Bowl for the 16th time in the last 19 Bowl trips.

The Wolverines have 10 players That Hail From The State Of Florida.

Who knows how many more they'll land with Harbaugh recruiting heavily down here.

While Harbaugh will not leave Tampa happy at the moment, Muschamp unquestionably did and it wasn't for just the victory, but the Entire Outback Bowl Experience.

"I want to thank Jim McVay and The Outback people and the wonderful week they had for us," Muschamp said. "The great thing about this bowl game is they don't make us do 400 different things, but the one thing you do ask us to go to, I went. It was great to be there and represent the University of South Carolina in a first class manner." 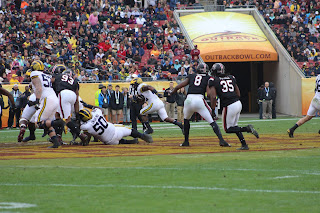 The only real events that I missed due to a late arrival was Clearwater Beach Day that was from 11-4 pm on Saturday, December 20, 2017. This featured the school marching bands and cheerleaders, plus tug-of-war contests. On December 31, 2017, The Battle of The Bands took place at Busch Gardens, and in Ybor City, there was a New Year's Eve Parade & Pep Rally.

But I did get to the beach at 6 pm for dinner then returned the next night for a beautiful sun set.

Having the game on a Monday gave me the entire weekend in an area that I called home from 1984-86 as a University of South Florida graduate. I've been to the parades in the past as well as Busch Gardens from past visits, so this business trip enabled me to weed out the obvious tourist traps.

Unfortunately, I didn't have time to stop by USF this time and Busch Gardens will come another time.

Instead, The Outback Bowl should be proud of the presentation they put on and we would welcome the opportunity to return down the road.

I was particularly impressed with Director of Communications & Sponsorship's Michael J. Schulze. 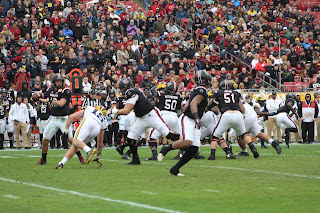 He still issues a credential for late Tampa Tribune legendary Sports Editor Tom McEwen, who died on June 5, 2011 at the age of 88. I had the good fortune to work for McEwen from 1984-86 and we'd see each other a couple times a year when the Detroit Lions were in the same division playing The Tampa Bay Bucs regularly.

McEwen was an iconic figure in the area and has a street named after him near the Media Entrance of Raymond James Stadium.

But it will be interesting to see how Michigan and South Carolina progress down the road.

On Friday, South Carolina rewarded Muschamp for his 9-4 record with a six-year deal worth $28.2 Million, and gives him a $1 Million raise.

Meanwhile, for both programs, it's off to the recruiting trail and then to spring practices leading to the regular season later in the year. It will be interesting to see whether Peters remains the Wolverines starting QB next season.

Perhaps, we'll see them meet in another Bowl Game since there are SEC vs Big 10 tie-ins.

But once again, if there is a Bowl Game to attend, The Outback Bowl gets my endorsement.

The Football In Paradise Booklet does an outstanding job promoting the Tampa Bay Area in general so whether an individual goes to some of the organized events or not, there is plenty to do.

Once again, I'll be monitoring the Michigan and South Carolina Football Programs in 2018.

Scott Morganroth can be reached at www.scottsports33.com and is a member of Detroit Sports Media.
- January 07, 2018