LeBron James vs. Michael Jordan, Who Would You Choose? The Tale Of The Tape.

By Scott Morganroth
and Candy Ebling

When I initially thought about comparing these two legendary basketball players I was thinking about combining it with other NBA subjects. 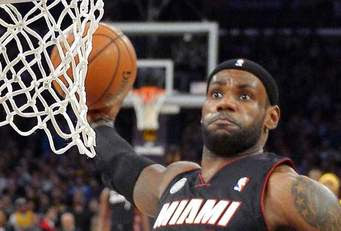 However, after seeing a lot of Sports/Debate Shows I felt this comparison could stand alone.  And who better to get into such a discussion than my sports colleague Candy Ebling and I.

During the course of this story each of us are going to exchange our viewpoints about these incredible players.

When Ebling was in middle school, I was at the New Orleans Superdome in 1982 watching Michael Jordan lead the North Carolina Tarheels to a National Championship win over the Georgetown Hoyas giving Dean Smith his first National Title in front of over 60,000 people and millions of viewers on CBS sports.

Are there any right answers as to which one of these players is better?

I would say No because it's a generational difference in the eras from which they competed.  Candy will lead off with her comments and I will follow with mine.

How do you compare these two players that played in very different eras?

When comparing two players, the first thing that I look at is stats.  So lets compare them.  Michael Jordan played 1985 - 2003 and LeBron James started in the league in 2004 and is still playing.

As you can see, by comparing the numbers they are pretty even.

In the NBA, the three-point field goals have become increasingly more frequent over the years with effectiveness increasing slightly.

There also have been numerous (too many to list here) rule changes over the years that have impacted the game over the course of these two careers.

If I was comprising My All-Star Team, these two would be my first two picks.

They are both great players, who excelled in the era in which they played the game.

To me they played in such different era's it's too hard to pick one over they other.

What stat do you rank the highest to pick a #1.  Is it who scored the most points in their career? Who has the most titles? Who did the most with the least amount of supporting cast?  Who had more talent? Who had more skill?  Who had more discipline? Who played defense better?  Too many questions.  They are both greats of their respective eras.

Everyone has a right to their opinion on who is the best.  How do we compare when one has finished playing his career and the other is still going?  No matter what your opinion is, we can all agree that they are both Basketball Greats!

One final note.  I consider myself lucky to have been able to enjoy watching both of them share their talents on the basketball court. 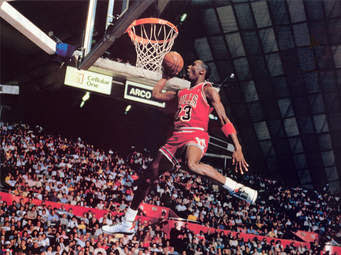 If I had to choose between these two athletes, I would definitely pick Michael Jordan.  First of all, Jordan was a six-time NBA champion.  In six final appearances, Jordan is 6-0.  Its amazing that he won six NBA Finals MVP awards.

His Chicago Bulls teams ended the Detroit Bad Boys two-year Championship run and he beat the Los Angeles Lakers in the NBA finals.

If Jordan hadn't of taken a two year hiatus to play minor league baseball with the Chicago White Sox Organization, he could of very well won eight titles in a row.

After Magic Johnsons and Larry Birds careers came to a conclusion the NBA needed Jordan to carry the torch until the next generation of super stars came into the league.

As I mentioned before the league has changed from being a physical league to now it's a shooters game.  It seems like every team is trying to take a lot of three-point shots, whereas when I was growing up, your three-point play was a two point shot and a foul.

As for James, he's 3-6 in the NBA Finals and despite his eight straight finals appearances.

I will say this much about James, he is an incredible athlete that could have played in any era.

He's quick, strong, basketball smart, and an incredible leader on and off the court.  I'm impressed with his ability to carry a team on his back, particularly in the post season.

This season he played in all of his teams games and logged a ton of minutes.   There is no reason to think that at of the age of 33, that he should easily be able to reach the 40,000 point plateau providing he stays healthy.

The only questions are:  How many NBA titles will he end up with? Where will James finish his Hall of Fame career? Stay tuned.

But in the end, I still judge a player by how many championships they have won and that's where Jordan has the edge.

Scott Morganroth is a member of Detroit Sports Media.