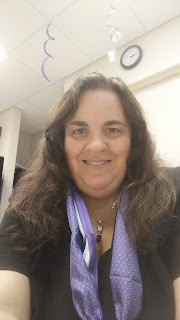 During that past 10 weeks, I have a Reliever that tops them all.

Her name is Candy Ebling.

After I had eye surgery that kept me off the computer for 10 weeks, Ebling has done an outstanding job keeping this website going as I've had to dictate my thoughts and she's been typing in the information.

During this period, it's been neat coming up with ideas which enable her knowledge of sports to shine. And boy, did it shine!

Of all the females I've ever had interactions with through the years, Ebling is undoubtedly the best I've ever dealt with!

I always knew she was an outstanding sports photographer, but what I've seen in a pair of stories, was quite impressive.

During the past 10 weeks, she's been a savior in putting in the tons of drops I've needed in both eyes, as my recovery has been quite slow due to the nature of the surgery.

At the moment, I'm currently using temporary readers so I'm still a bit limited in what I can do until I get my new prescription glasses in three weeks.

But Ebling has been a huge help in managing my LinkedIn and Facebook Accounts as well as checking my email.

During the month of July, August and September, I will be working hard on getting caught up with the many baseball stories from Spring Training while we prepare for football season.

I'm sure she'll be glad to resume her photographers role and deliver her fantastic photos.

But as she's filled in for me, Candy has gained a greater amount of respect for what a Sports Writer does knowing what it's like to have traded places temporarily.

I am very happy that I could view her as the best reliever that I've ever had!!

So when you think of what relievers you enjoy in and out of sports, I hope you take the time to appreciate them as much I have appreciated Candy!

Candy is a Hall of Fame Person and The Ultimate Team Player!

Let Your Reliever know what a blessing they are to have in your life.

Have a great Fourth of July!!