What a difference a year makes.

During the 2017 season, Milwaukee Brewers outfielder Keon Broxton was the starting center fielder.

But things changed in the off season as the Brewers signed Lorenzo Cain as a free agent and obtained Christian Yelich in a trade with the Miami Marlins.

With these acquisitions, Broxton was the odd man out and started the season playing for the Brewers AAA team the Colorado Springs Sky Sox.

The injury bug hit the Brewers as Broxton was promoted to Milwaukee on June 26 as he replaced Cain in the line-up.

As of this post, Milwaukee has a 53-36 record and Broxton is a spark plug and his energy has been felt in many ways.

Despite a .172 average and 29 at bats, he has two homers, three stolen bases and four defensive gems.

He's had game saving catches and in a Brewers 8-2 win over the Cincinnati Reds at Great American Ballpark, he had a snow cone catch that earned him the Top Play Honor on ESPN's Sports Center.

There is somewhat of a Detroit connection to Broxton.

He was born in Lakeland FL, the Spring Home of the Tigers.

Prior to the Brewers March 10th game against the Colorado Rockies, we had an interesting conversation about his time growing up in Lakeland and how much he followed the Tigers.

Throughout the years, I've interviewed a lot of athletes and I must say that Broxton is one of the most charismatic and enjoyable to talk to.

Broxton is 6'3" and weighs 200 pounds, is a speedy outfielder and is an excellent defensive player. 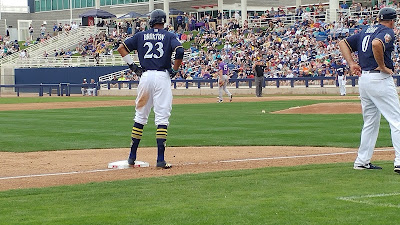 In a spacious, let alone any ballpark it's a treat to watch some of the incredible plays he makes, plus seeing him make nice plays when leaping over the wall.

On this day at the Brewers Spring Training Maryvale Stadium in Phoenix AZ, it was a blast talking to Broxton even though we arrived in Phoenix in the early hours of the morning from Orlando FL, then had to be at the game six hours later.

Ironically both of us graduated from Lakeland High School but his school was in Florida while mine was in Milford MI.

Broxton was a wide receiver for his high school squad and was recruited by Florida Atlantic University, but he decided to stick to baseball.

I hope you enjoy this interview as much as I had fun talking to the 27-year old. 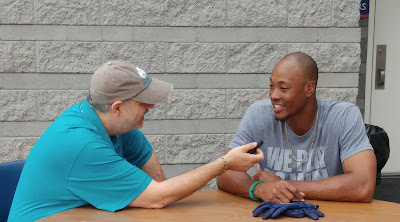 Q:  What was it like to be born in Lakeland?

A:  Lakeland is kind of a big, but little town where everyone knows everyone around there.  But there is 13 lakes there.  It's a pretty big populated town but it's a nice place to grow up, family-oriented.  I had a lot of friends that lived in my same neighborhood.  Going to schools around there are awesome and I went to the Lakeland Dreadnaughts, who are the most dominant school around there right now.  I also went to Mulberry High School and that's a good place down there as well.  Lakeland is a nice quiet country town.

Q:  Have you every heard of Joker Marchant Stadium?

A:  No. Everyone from Lakeland calls it Tigertown.  I don't think anyone in Lakeland knows the name of the stadium (laughing).

Q:  Have you ever been to Tigertown?

A:  I have been to Tigertown a couple of times.  I went there for a showcase in 2014.  I've also worked there a couple of times in the off-season.  I'm somewhat familiar with the complex.  I know they have the dorms.  I'm not sure they're still there but whenever I went to the showcase, the dorms were very convenient for all the players that don't have places to live.  It's a decent facility to go and work on your game.

Q:  No interview would be complete if I wouldn't ask you, have you seen any Detroit Tigers games at Tigertown?

A:  I should feel bad because I'm from Lakeland and I have not been to a Detroit Tigers game at all.  I don't know why or how I haven't especially with a guy in the same profession, but I never made my way over there, and I had my own plans going on.

Q:  Have you ever heard of Tigers Hall of Famer Al Kaline?

But I guess I need to do my study on baseball history since I'm playing a game I should realize and know what's going on back in the day and present right now.

Although Broxton never saw the Tigers play in person in Lakeland, FL, he'll have an opportunity to see them and their Olde-English "D" play first hand when Detroit travels to Milwaukee's Miller Park for the season ending series from September 28-30.

You can rest assure this will be a lot of fun for Keon playing against the Tigers and figures to be a big series for the Brewers with playoff implications on the line.