I have been in my fair share of Spring Training ballparks, but there was a certain feeling that I have when I come to West Palm Beach, FL.

Back in the early 1980's, I used to cover Florida State League (FSL) games at the now demolished West Palm Beach Municipal Stadium. I also covered an FSL All-Star Game.

The Montreal Expos had a lot of prospects that went on to play in the major leagues.

On Sunday, March 4, 2018, I returned to this city to see the Detroit Tigers visit the Washington Nationals at FITTEAM Ballpark of The Palm Beaches. 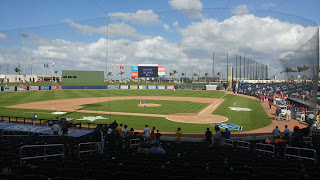 The 2017 Season was the inaugural season for the ballpark. There were record crowds for the Houston Astros and the Washington Nationals (formerly the Montreal Expos), who share the same facility.

On this day, the attendance was 4,481 to see these two teams compete.

Until the ballpark opened, the closest drive to cover a game was about an hour in Jupiter from Deerfield Beach, where the Miami Marlins and St. Louis Cardinals play. Roger Dean Stadium is a nice facility.

The New York Mets are about an hour and a half from Deerfield Beach in Port Saint Lucie.

For me, a 30 minute drive was great which allowed me to sleep in my own bed.

Otherwise, to see the Detroit Tigers in Lakeland is about four hours and requires me to get a hotel across the state, though I have commuted the trip from time to time if I get in my crazy driving moods where I like to meditate and do intense mental thinking.

My wheels are always turning. 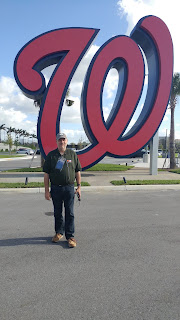 To cover the Nationals was neat because it was like covering the Montreal Expos all over again. It's unfortunate that the FSL doesn't have a team yet, otherwise I'd be there a lot.

One theme stayed consistent as I returned to West Palm Beach.

I was seeking recommendations from Tigers PR Guy Chad Crunk, who is always a huge help to me about good ideas.

He suggested catching prospect Jake Rogers, who was acquired on August 31, 2017, from the Houston Astros in exchange for Justin Verlander.

To date, Rogers is going to be one of the Tigers top prospects, who will be playing for the Mesa Solar Sox in the Arizona Fall League.

Rogers, 23, is 6-1, 190 pounds and hails from Canyon Texas. He played college baseball for Tulane University.

Before the Tigers 6-2 loss to the Nationals in a contest where Nationals superstar outfielder Bryce Harper hit his first HR of the Spring, Rogers and I spoke about his professional career in this exclusive interview.

Q: I understand that you were acquired in the Justin Verlander trade. What were your thoughts when you heard about it?

A: I had a lot of emotions going through. I was with a couple of buddies and I didn't know what to take at first. After it all settled down, I was real excited to come over and really happy to be a part of the new organization, the Detroit Tigers. 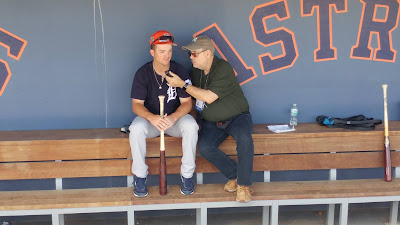 Q: To be in a trade involving Verlander, were there any extra feelings involved knowing this is a guy the Houston Astros organization classified as a difference maker who subsequently helped lead them to the first World Series Title in Franchise history?

A: Oh yes, for sure. Obviously, he's a great ballplayer who was a huge part of the Tigers and then the Astros when he went over there. It's an honor to be traded for him and I've been loving every second of it.

Q: Tell me what it was like growing up in the Astros farm system. What did you learn from that experience that you'll be able to bring over to Detroit?

A: I learned a lot from them. They drafted me in 2016. Throughout that 1.5 years I was with them, I tried to accumulate and learn a bunch of different things throughout the organization and kind of bring and accumulate into my game. When I came over here, I learned some of the stuff the Tigers were teaching. I was trying to mix it and make me the best baseball player I can be.

Q: Tell me some of your strengths and weaknesses?

A: Strengths, you know I'm a catcher and take pride in being a great catcher controlling the running game and getting strikes called strikes, balls called strikes, helping the pitcher out and the staff out any way I can possible. I take pride in driving runners in. That's a big part of my game. That's who I try to be.

Weaknesses, I'm trying to improve on everything, everyday any way possible. If Gardy (Manager Ron Gardenhire) says something about my catching that he thinks will be better, and puts it in a professional way, I'm going to try to do it. There's little things in my game that can be made better, and everyone can do better every single day so that's what I'm trying to do.

Q: Tell me what your experiences have been like this Spring Training working with Ron Gardenhire, a guy who has undoubtedly been around baseball for the longest of times?

A: It's been awesome man. Gardy is a great dude and he's a players manager. He's great to be around and I've been trying to soak up as much knowledge any way I can along with his entire staff. Like I said, I'm trying to get better everyday. What, and ever they say, I'm going to try to go out there and do the best I can, then get out there and do it.

Q: No Rogers interview would be complete when I mention a Kenny Rogers reference. I see you smiling a bit. Do you follow his country music at all and how do you like having the same last name?

Q: Finally, what about Miguel Cabrera. Have you had much of any opportunity to interact with him? 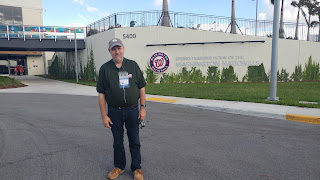 A: Yes. he's a great guy, man and he's fun to be around. He's a fun guy and loves the game and that's the guys I like to be around.
To this date, the Tigers have won 61 games and have used a lot of players in a rebuilding season.

Do the Tigers have their catcher of the future on their existing roster?

I doubt it but time will tell.

It will be interesting to see how Rogers performs in the Arizona Fall League.

But it was neat to return to West Palm Beach, FL and it felt like old times seeing if there is another
prospect that will be a future major league player.

Scott Morganroth can be reached at www.scottsports33.com and is a member of the Detroit Sports Media.