These Cats Are Hungry!

If this was a horse race, the results wouldn't even be close amongst the Florida NFL teams.

On August 24, we traveled up to Tampa and saw the Detroit Lions defeat the Tampa Bay Buccaneers 33-30 at Raymond James Stadium.


The Buccaneers entered the 2018 season without QB Jameis Winston, who will serve a three game suspension as a result of the personal conduct policy.

There is one word that describes the Miami Dolphins.

QB Ryan Tannehill has been unable to stay healthy the past couple of years while running back Jay Ajayi was traded to the Philadelphia Eagles last season and played a key role in them winning the Super Bowl. 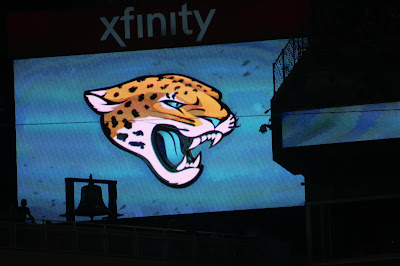 Let's talk about the Jacksonville Jaguars.

This is a team which finished 3-13 in 2016 and had tarps in certain levels of the stadium to hide empty seats.

Gus Bradley was fired 14 games into the 2016 season and was replaced by Doug Marrone.

In his interim stint, Marrone compiled a 1-1 record and the team just looked much better.

Coughlin proceeded to remove the interim tag from Marrone and that move paid big dividends as the team finished 10-6 and advanced all the way to the AFC Championship Game on January 21, 2018.

New England trailed 20-10 when they began their rally.

It started when Tom Brady connected with Danny Amendola for nine-yards and a score with 8:44 left in the fourth quarter to cut the deficit to 20-17.

The Jags were 2:48 away from reaching the Super Bowl losing to the Patriots 24-20 as Brady threw a four-yard TD pass to Amendola for the winning score.

During the playoffs, QB Blake Bortles was making smarter decisions using his legs to avoid negative plays and also proved he could win shootouts as well. 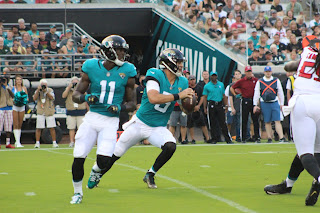 I saw the Jaguars win an ugly 10-3 playoff game at home versus the Buffalo Bills.

Jacksonville did the unthinkable by not only beating the Pittsburgh Steelers 30-9 in Steel Town during the regular season, they pulled the trick again winning in the Division Playoff Round  45-42 also in Western Pennsylvania.

During the 2017 season, the Jaguars possessed an excellent defense and they were aided by the standout play of running back Leonard Fournette. 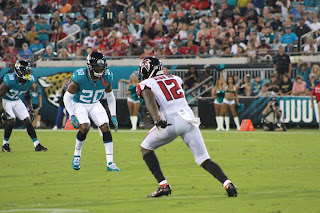 When you have a standout cornerback Jalen Ramsey shutting down opposing playmakers, this is an excellent foundation.

The defense chased Falcons QB Matt Ryan all over the gridiron and the offense did what it needed to do to record the triumph.

Unfortunately for Jags wide receiver Marquis Lee, he suffered a season ending knee injury as a result of a low hit and was carted off the field.

In three of Jacksonville's four pre-season games, the Jags limited their opponents to 10 points or less and they won all those contests.

In week two, Jacksonville defeated the Minnesota Vikings on the road 14-10, I just mentioned the Atlanta game and in the finale against Tampa Bay on the road, they won 25-10.

What does pre-season mean?

The Jaguars finished this pre-season 3-1 and based on what I've seen from this team thus far, this team will be playing like One Angry Cat prowling to get to a place where they nearly tasted "The Super Bowl."

During the off-season they gave Bortles a contract extension since he recorded two playoff wins.

In my opinion after seeing him for three years, all Bortles has to do is simply to a better job protecting the football and not committing the deflating costly turnover.

After the Falcons game, I asked Marrone what it was like to be the hunted instead of the hunter? 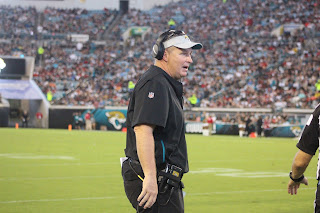 "When you talk individually to a lot of guys on the team, the majority of them have a chip on their shoulder.

The Jags defense once again proved why it's one of the best in the league in the teams' opener in the Big Apple during it's week one win against the New York Giants on September 9.

Just like pre-season, the Jags held its opponent to a low point total.

Fournette left the game early due to a minor hamstring issue.

During the week, the team was cautious about his workload not taking any chances of any long term issues. 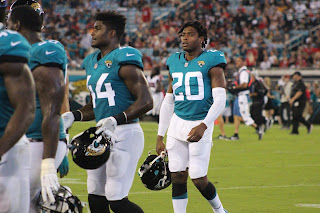 He will be a game time decision in Jacksonville's home opening rematch against the New England Patriots today at 4:25 pm in Northern Florida on CBS.

I expect Jacksonville's defense to play an important role in deciding the outcome of this contest.

For the record, Patriots QB Tom Brady is 8-0 all-time against the Jags.

The road to the Super Bowl for Jacksonville leads through New England.

This team knows that so Marrone, who I think is one of the most underrated coaches in the NFL, won't need any motivational speeches to get his players psyched up.

As I look at the Jaguars, this team reminds me of the Detroit Pistons during the Bad Boys Era during the mid 1980's and early 1990's.

The Pistons road to winning a pair of championships went through the Boston Celtics taking their lumps in the playoffs.

Jacksonville is dealing with the New England Patriots.

While Marrone is no Chuck Daly, the thing these men have in common is they worked with losing franchises before landing in good spots.

How can I not mention that Patriots Coach Bill Belichick bolted the Cleveland Browns for a second chance and he's made the most of it winning Super Bowls.

But as you cover a team for a couple years and see the progression during the past two years, it's safe to say that These Cats Are Hungry!

The Jags will get some National Television exposure as well.

I'm looking forward to seeing the Jaguars later this year after having left shoulder surgery which is slated for the first week of November. 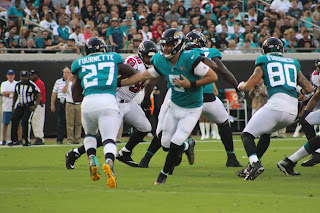 But for now, it's safe to say that if their regular season performance mirrors their pre-season performance, then offensive coordinators from around the league will have to buy tons of Tylenol to figure out how to solve this potent defense.

As I mentioned before, as long as Bortles and Fournette are healthy and productive, this team has a punchers chance to be Super Bowl contenders and take that next elusive step.

Scott Morganroth can be reached at www.scottsports33.com and is a member of Detroit Sports Media.
- September 16, 2018